What do I mean by this? Macroeconomists have many faults, but one clear positive is that we think about systems as a whole rather than just one particular component. One area where it is important to do this is in thinking about what determines economy wide real wages. Take, for example, this recent post by the Flip Chart Rick. (His posts are brilliant and I try and read every one, but unfortunately this one is too good an illustration of the problem I have in mind.) He starts with this chart from the FT that I reproduce below. 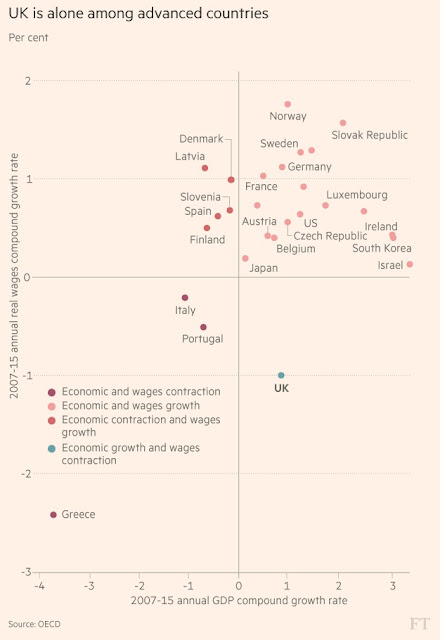 Why is the UK unique in having a combination of negative real wage growth but positive GDP growth? Now it just so happened that I had written a post about this, explaining I thought pretty well the key reasons. But Rick mentions none of these, but writes about a whole bunch of stuff related to labour market structure and trade union power that I think are largely irrelevant. I think he is making the same mistake that people make when they say immigration reduces real wages, or that we would all be better off if only unions were more powerful.

All these things are important in influencing nominal wages, and perhaps the distribution of wages between workers. But real wages also depend on prices, which are set by domestic or overseas firms depending on where goods are made. If nominal wages go up, prices are likely to go up.

So what do I think accounts for the fall in real wages in the UK over the last decade? We need to start with GDP per head rather than GDP: growth in the latter has been boosted by immigration. Here is what has happened to GDP per head over the last ten years. 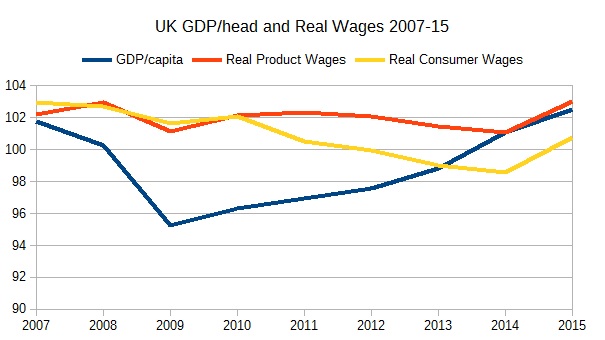 GDP per head fell in the recession, and then steadily but slowly recovered: the slowest recovery in at least a century. To see how that is related to real wages (using ONS average earnings divided by the CPI), which I call real consumer wages, we first need to look at an intermediary measure: real product wages. These are real wages divided by the price of UK output: the GDP deflator.

This is an interesting measure because its closely related to a simple identity relating GDP to labour income and profits. We can see that real product wages have not changed very much over this period: the recession mainly hit profits, or it created unemployment. (Real wages are wages divided the number of workers, GDP per head is GDP divided by the total population, which includes the unemployed.) But if we are comparing 2007 with 2015, real product wages were as stagnant as GDP per head.

So why did real consumer wages fall? That must be because consumer prices rose more than output prices. There are two reasons why this happened in this case: indirect taxes increased (remember the 2011 VAT hike), and a large sterling depreciation during the GFC worked its way into higher prices for imported goods. It is of course another depreciation after the Brexit vote that is cutting real wages once again right now. As I always try and stress, real GDP growth per head is not a good guide to real income growth if the price of imported goods rise or the price of UK goods sold overseas falls (what economists call a decline in the UK’s terms of trade).

Real wage growth in the UK has not been lousy because of lack of union power, immigrants or higher profits, but because economic growth (properly measured) has been stagnant, austerity included raising indirect taxes and we have now had two large depreciations in sterling. [1] That is not to say that these labour market factors are not important. At a macro level they are important in keeping inflation low, which should have allowed a more rapid expansion of GDP growth than we have actually had. That is where fiscal austerity and Bank of England conservatism come in. At a micro level labour market structure helps influence the distribution of earnings between different labour groups. [2]

What I say about the unimportance of profits is factually true for the UK over this period, but it is not always the case. In the US and elsewhere we have seen a gradual shift from wages to profits over the last few decades. But even here it is not obvious that weak nominal wage growth is the main cause, because in a competitive goods market lower nominal wages should get passed on as lower prices. One explanation that is attracting a lot of interest is the rise of superstar firms. These firms make unusually high profits, or equivalently have low labour costs, and if output is shifting towards these firms labour’s share will fall. What these firms do with their profits then becomes an important issue. More generally, it may be the case that governments have become too lax at breaking up monopolies, allowing a rise in the overall degree of monopoly.

The consequence of growing concentration, superstar firms and a rising share of profits is that income derived from profit grows faster than income from labour. I say derived from profit because I would include in this CEO and financial sector pay, which in effect extracts a proportion of profits from large firms. The net result is that most of the proceeds of economic growth are going to those at the top of the income distribution. But it would be good if we could change that by making the goods market more competitive and removing the incentive for CEOs to extract surplus from firms [3], rather than by making the labour market less competitive.

[1] One possible caveat here is that low wage growth may have encouraged firms to use more labour intensive production techniques, which has depressed investment and productivity. But if we want to incentivise firms to invest in more productive technology, increasing demand is a much better method than increasing nominal wages.

[2] Another caveat. I'm not sure where the real wage data in the FT chart comes from, but the fall in UK real wages there is greater than you get by using the ONS average earnings data (which I have used), so it may be a different and more specific measure of real wages. In which cases labour market structure might be relevant in explaining that number, and I apologise to Rick in advance if that is what he had in mind.

[3] By, for example, applying much higher tax rates on high incomes, or imposing a maximum wage.
Posted by Mainly Macro at 08:31