No spring in the UK air

I was not going to write anything about the non-event of Hammond’s Spring statement, in part because I confess I am tired of writing about the Conservative party’s hopeless macroeconomic policy. It is like being forced to second mark all the fails from a first year economics exam. There is a danger that if you keep on writing things like ‘the government is not like a household’ and ‘pro-cyclical policy is a mistake’ your writing becomes illegible or you start writing everything in capital letters. I can sense Chris Dillow is also running out of patience,

So this time I will ignore macroeconomics and write instead about political economy and distribution. The political economy of modern Conservatism is extreme laissez faire in the following sense. The belief is that if you let businessmen (they are usually men) get on with things, and take away red tape, regulations, and reduce taxes, all will be well. There is no need to help with public sector investment and R&D initiatives, or worry about rent extraction: the private sector can always do things better itself. The public sector does not support the private sector, but just gets in the way. An obvious consequence is that the Chancellor is reduced to a glorified bookkeeper, and political success comes with balancing the books and shrinking the state


The results of this approach have been disastrous. This laissez faire experiment took place in the most favourable of circumstances: a recovery from a very deep recession which if history is any guide should have seen rapid growth. The result has been the slowest recovery for as long as anyone can remember. This chart from the Resolution Foundation shows this clearly. 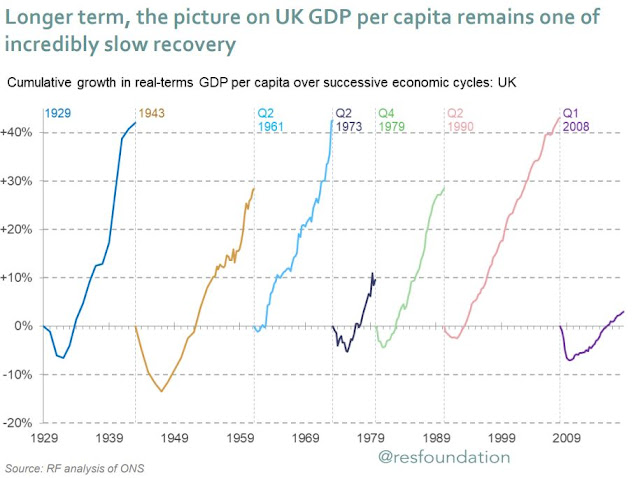 The economic approach of those on the right of politics has therefore failed, and failed big.

Perhaps it has been unlucky. Perhaps for some as yet unexplained reason the financial crisis has doomed the subsequent recovery. Perhaps the tepid recovery is a consequence of the particular mistakes of austerity and Brexit rather than a reflection of the overall laissez faire approach. That debate has begun in progressive circles, but in the mainstream media and among Conservative politicians we still hear talk of ‘strong and stable’. It is as if everyone is living in a postmodern world where the economy can be whatever government politicians wish it to be.


I have talked in the past about how this fiction of a strong economy can be sustained despite being obviously false. I argued that this deceit won the Conservatives the 2015 election. But I think there is another factor I have not mentioned before, and that is how the burden of austerity has been spread.

This chart from the IFS tells us all we need to know. On the horizontal axis are income deciles, with the richer to the right. On the vertical axis is the loss (or small gain) as a result of fiscal measures. The grey line shows what happened under the Coalition government. Austerity hit the poor most, but the richest also lost income. Austerity under a Conservative government, either already under way or (mostly) planned, hits the poor most and actually slightly benefits the ‘almost rich’. 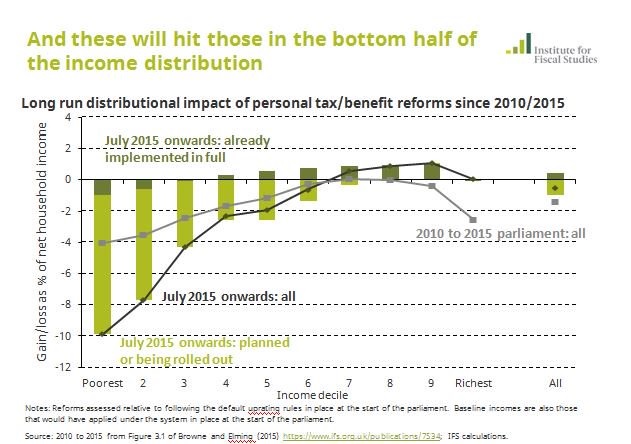 We can say quite clearly, and without caveats, that the poor have born the brunt of austerity in terms of income gains or losses. In that sense we have not, and nor will we be, all in this together. Jonathan Portes estimates these changes will increase child poverty by 1.5 million over the next 5 years. Since Margaret Thatcher, Conservative governments have been and continue to be regressive (transferring money from the poor to the rich) and have increased poverty.

Austerity has hit and will continue to hit those who can least bear it, but it has had very little impact on your average Conservative party member, or your average political commentator working for the BBC. This government has not just continued where Mrs Thatcher left off in dividing this country by class, but it has also divided it by age and divided it once again over Brexit. We may have just had the spring statement, but the country is still in the winter of its discontent.
Posted by Mainly Macro at 09:53