Was Labour’s decision on EU immigration in 2004 a mistake?

The Labour government decided to let people from the A8 eastern and central European countries that had just joined the EU to have free access to the UK from 2004. Most other member countries delayed the point at which free movement from these countries was allowed. As a result, we had a large influx of migrants from Poland and other countries from 2004.

The received wisdom seems to be that this was a huge mistake. Jack Straw called it a spectacular mistake. Ed Miliband said the government had got it wrong. I’m reminded of this by Ian Jack, who recently in the Guardian gave us eight reasons that we ended up with Brexit. One was that decision by Labour. He writes

“immigration had begun to die as a political issue until, in 2004, Tony Blair’s government decided to open the UK labour market to the eight eastern and central European countries that had joined the EU.”

Here is data on UK immigration and Ipsos-Mori’s running poll on how many people think immigration is an important issue. (You can see data on all the issues here.)

It is certainly true that immigration has ceased to be viewed as an important issue (blue line) in the late 1990s. But immigration’s importance as an issue rose dramatically not from 2004, but well before 2004. From 2004 to 2008 it increased a little, but then declined as worries about the economy took centre stage.

This does not fit Jack’s story about a dead issue reignited by immigration from the EU in 2004, unless voters were anticipating the decision. It seems more likely that voters were responding the large increase in non-EU immigration that happened after Labour came to power, as the chart below shows. 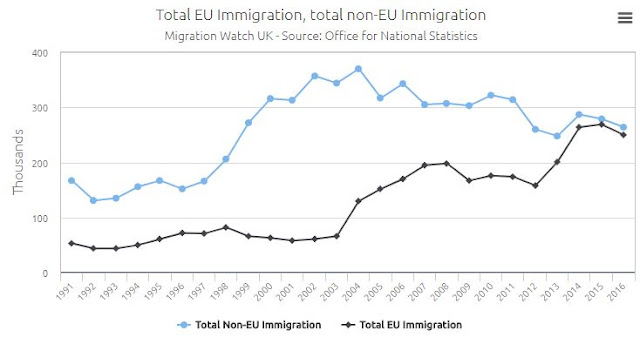 But even that seems improbable: did it really take people a few years to notice. Here I show that there is a variable whose timing correlates with the increasing importance of immigration as an issue with only a slight lead: news stories about immigration. I give lots of evidence that suggests that the relationship is causal: press coverage about immigration, which in most papers is invariably negative, causes people to say immigration is an important issue.

To his credit Jack does list among his eight reasons for Brexit the UK press, and suggests as I have done that the difference between the vote in England and Scotland owes something to the press being “far more rabid” in England. Our rabid right wing press were always going to weaponize EU immigration whenever it happened. Labour could only have delayed A8 immigration until 2011. That would still have given newspapers plenty of time to write negative stories about EU immigrants before the referendum in 2016, as they of course did in spades. As immigration from the EU between 2004 and 2011 is likely to have provided economic benefits for natives, it is not obvious that the 2004 decision was a mistake at all.