The complete failure of the Brexit project

The Brexit project is already a complete failure. That statement may seem odd, as we are less than one year away from leaving the EU. But what happens in March 2019 if all goes to plan? We leave the EU, but remain in the Single Market (SM) and Customs Union (CU). It is not Brexit means Brexit, but Brexit in name only (BINO). All the UK ‘gains’ is the inability to influence the rules and laws we have to follow as part of the SM & CU.

If the Brexiters were being honest, the transition is worse than not leaving. Not only do we lose the sovereignty they perceive as a result of being in the SM & CU, but we also lose our current say in how the SM & CU are run, and we still pay into the EU budget. In sovereignty terms that is going backwards. Free movement continues, although again if Brexiters were being honest they were never too worried about immigration: that was just a hook to catch voters with. But all the things that Brexiters do go on about like freedom to make trade agreements with other countries are impossible during transition.

Brexiters may well convince themselves that transition is just an embarrassing phase before their new dawn. They can only do that because they have never concerned themselves with details, whether those are details about how trade works or details about negotiations. The reality is very different. There is no solution to the Irish border problem except staying in the Customs Union and Single Market for goods.

Will the EU be prepared to accept the ‘Jersey option’, which means splitting the Single Market (UK in for goods and out for services) and allowing an end of free movement? That may appear to others as if the UK might be better off after Brexit, which breaks one of the key EU requirements of any deal. As we have learnt from the last year, if the EU does not want something it does not happen. Leaving with No Deal is no longer a threat, so it may be quite possible that the EU may simply say the only feasible solution, if the UK does not want a border in the Irish Sea, is to stay in the complete Single Market and Customs Union. With a hard deadline for the end of transition leaving little room for negotiation, the UK may have little choice but to agree to BINO, or something very close to it.

The alternative is that the EU creates an extended transition. But if they are unwilling to allow the UK what it wants, this amounts to the same thing. The only cost to the EU of perpetual transition is pretending to negotiate. The UK government will continue the pretense because it is too embarrassing to admit defeat. The result for the Brexiters is the same: staying in the CU and SM with no say.

If you think that could not happen without a revolution on the Conservative right, watch how Gove and Johnson are already backing down on all their past red lines. Will not voter pressure (aka. the right wing press) demand that May cannot agree to continuing free movement? By 2020, when the final deal will be negotiated or postponed, immigration from the EU may have almost disappeared as a result of slow growth in the UK, sterling remaining weak against the Euro, and continuing uncertainty about the final deal. Net EU immigration is already less than half non-EU immigration. 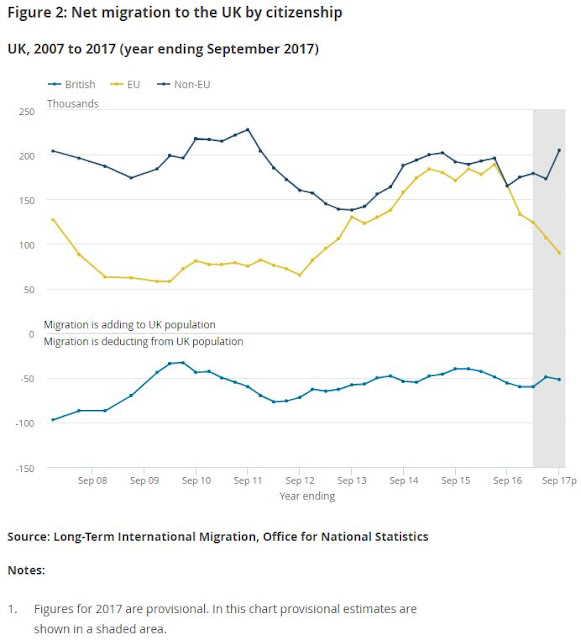 It is no surprise that the Brexit project has failed and failed so utterly and completely. It was based on a fantasy about UK power. According to this fantasy the EU would be desperate to let the UK continue to trade with the EU on current terms and would turn a blind eye when the UK no longer obeyed the rules of the Single Market and Customs Union. The reality is that the EU has not been willing to destroy the Single Market and Customs Union just to keep exporting to the UK. The moment it became clear to Brexiters that their fantasy was just that, the only way that they could gain the sovereignty they craved and promised was to leave with no trade deal.

But that idea was also based on the fantasy that trade with the EU could be easily replaced with trade agreements with other countries. Nearly every expert said at the time these ideas were nonsense, and nonsense they remain. No government would ever knowingly do so much damage to its economy. The moment the government’s own analysis confirmed what outside experts had said before the referendum, No Deal was off the table. Mr. Fox will still have a job: not making new deals but trying to convince the many countries that currently have trade agreements with the EU that they should still trade on the same terms with the UK after we leave.

As I write the paragraph above there is a part of me that says surely no one could have been that foolish to believe those things. Surely there must have been more behind the accusation of Project Fear, and the fact that over 40% still believe they will be better off after Brexit happens. But in truth there was nothing more profound. Look at the desperation of Brexiters over the Irish border, claiming that none is needed when they originally campaigned to take back control of our borders.

Of course none of this will prevent the Brexiters celebrating their independence day in March 2019. They love the symbolism, and they will do a good job in persuading the BBC that something has been achieved. They have too much political capital in Brexit being a success. Key Brexiters will prefer to party rather than complain, particularly when there is still the prize of the party leadership to win. But the reality is that in March 2019 we become what Rees Mogg calls a vassal state in the short term for sure, and probably in the longer term as well.

There has been some debate recently among those who understand what is going on about whether Remainers should give up trying to prevent March 2019 happening and focus on getting the best Brexit terms. It is, as Ian Dunt says, a false dichotomy: there is no conflict in doing both. But if there is an exception to that, it lies with the Conservative rebel MPs. If they can see that Brexit will end not with a bang but a whimper, they may well decide that it is not worth being branded traitors by voting against the withdrawal agreement. That, not Corbyn, is the most likely reason why March 2019 will happen.

Of course there are mistakes the government can make before March 2019. But if Brexit happens, it will not even be a token victory for the Brexiters. For them, BINO or something close to it is worse than EU membership, because we gain nothing and lose a seat at the table. Their fantasy dream of Global Britain has in reality made Britain more insular, more powerless and less influential than at any time in centuries. Nor is there anything to celebrate for Remainers here. Economic damage has already been done, and will continue to be done because BINO is a more uncertain state than EU membership and because of less EU immigration. Years of the UK’s political life will have been spent finding out that the scheme of a small number of politicians and press barons was the folly experts said it would be, and then pretending it was not.