Talking to the Establishment 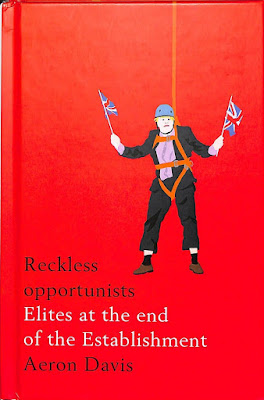 Talking to the Establishment is what Aeron Davis, a Professor of Political Communication at Goldsmiths London, has been doing for twenty years. In this little gem of a book he tries to pull together his thoughts and reflections on these interviews and extensive research on how today’s establishment works.

When people talk about the Establishment, they often imagine a socially coherent body managing the country in ways that serve its own collective interests. An elite network who predominantly went to certain public schools, who make big decisions of state over dinner in their private clubs. Even if outsiders entered into the upper echelons of politics, the civil service, business or the media, they inevitably became part of the Establishment network. To radicals the Establishment was a brake on social change, but for conservatives it provided the comfort that the country was in sound collective hands.

Davis argues that with the advent of neoliberalism in the 1980s, that cosy world began to fall apart. He even speculates that we may now be seeing the end of what we think of as an Establishment. He suggests the elite have lost coherence: that rather than look after the interests of the network as a whole (and for a conservative therefore the country), they look after the interests of themselves. They have become the reckless opportunists of the book’s title, getting what they can from the chaos they helped create.

In politics this idea is personified by the man on the front cover, who threw the country into the destructive mess that is Brexit simply for the sake of his own personal ambition. Press barons turned their newspapers into propaganda vehicles for the same end. But he also argues that we can see the same opportunism in business leaders who put personal returns over the interests of the companies they run. He finds that in the civil service the key ingredient for success is how good an individual is at self promotion, and he argues the same applies elsewhere.

A lot of this rings true for me, but Davis backs it all up with research and interviews. While austerity was what I call deficit deceit (using the deficit to scare people into accepting a smaller state) which served neoliberal ends, in the UK it was I suspect also simple political opportunism: a way to embarrass the Labour government with little thought about what it might do to the economy. In budget after budget, Osborne seemed more focused on wrong-footing the opposition than doing anything to revive productivity growth. You could easily call that reckless opportunism.

As well as this overriding theme, there is acute observation on other matters as well. For example on how journalism has become churnalism, and the accompanying growth of the PR industry. The only time I have met Aeron was at a conference where I was talking about how the media had distorted the austerity debate, and I remember how taken aback I was when some in the audience suggested academics just needed better PR. But this also connects with the main theme, where self promotion is the name of the game.

I found the book an enlightening and thought provoking read which was difficult to put down. It is both a fascinating insight about how individuals in the elite saw recent history, but also a provocative interpretation of how our idea of the Establishment may no longer be valid.