As Trump makes clear, the UK can choose US rules or EU rules. Brexit is about having no say in either.

Of course every Leave voter is an individual with their own motives. But if you had to broadly characterise the two big issues that gave the Leave side victory in 2016, it was fears about immigration and a wish for greater sovereignty. Both were based on lies.

You would not know it from the media, but people in the UK have been developing a more favourable view of immigration over the last six years. Here is a table from the latest National Centre for Social Research Social Attitudes survey on Europe. 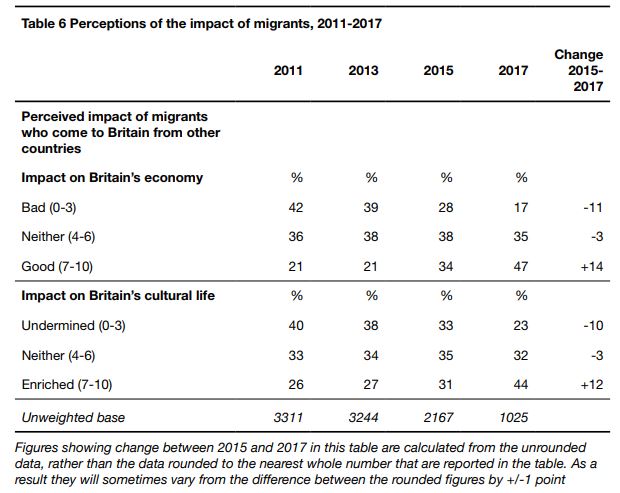 In 2017, for those who expressed an opinion one way or the other, nearly three quarters thought immigration had a positive impact on the economy, and 65% thought immigrants enriched our culture.

Given this trend in attitudes, how did we vote to Leave? I keep going back this poll on EU immigration published in June 2016 which I wrote about shortly after it came out. 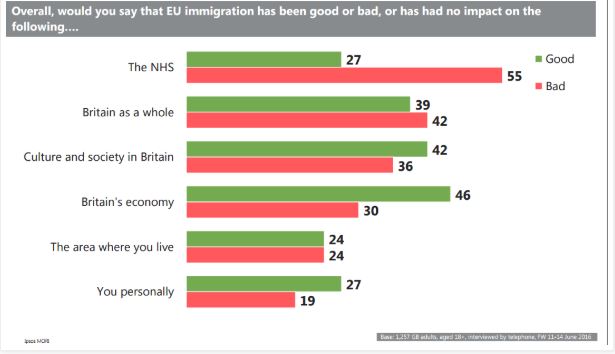 You can see it is consistent with the numbers above: people on balance think EU immigration is good for the economy and for British culture, and even for themselves personally. So why would they want to reduce EU immigration? Because they overwhelmingly thought EU immigration was bad for the NHS (and by implication all public services).

This, after all, is the line that Conservative and even some Labour politicians have consistently pushed, as have parts of the media with no comeback from most broadcasters. Before the referendum there were few stories about EU doctors and nurses, but plenty about migrants using the NHS. This concern was emphasised by the Leave campaign with the combination of the £350 million more for NHS claim and the prospect of being ‘overrun’ by Turkish immigrants.

The only problem with these claims that immigration reduces access to public services is that we know, with almost certainty, that the opposite is true: immigration creates net additional resources for public services. This is not complicated: they pay more in taxes than they take out because they tend to be of working age. But the myth that politicians and the media promulgate is that immigrants are somehow the reason access to public services has become more difficult, and they do this in large party to cover up the impact of austerity.

There was a final issue during the referendum that may have encouraged people to vote Leave. Even if they were positive about the EU immigrants that were already here, it just seemed sensible that the government should control their number. After all the government had set a target for net migration, and were having great difficulty meeting it. Yet the media never talked about the positive aspect of freedom of movement - the ability of UK citizens to live and work anywhere in the EU - and how that would end if we left.

I still talk to Leavers on both right or left who are convinced that the EU has taken away major elements of the UK’s sovereignty. One talked about “accountable democracy, sovereignty, independence, autonomy and freedom”. Yet when I ask for specific instances of a law or somesuch where the EU has compromised all these things, answer comes there none. There is a simply reason for this, beyond the propaganda, and that is that the EU is about harmonising regulations, and this harmonisation has brought benefits rather than pain to UK citizens.

International trade involves a form of cooperation with other countries, and international trade is good for both sides because it allows more efficient production as well as consumption of a greater variety of goods. The more we cooperate on rules and regulations, the more trade will happen. This harmonisation of regulations is like marriage: each side loses a degree of individual autonomy but we gain much more in return.

The thing about regulations governing networks of trade is that there cannot be too many of them, just as there cannot be many operating systems for computers. The whole point about harmonising regulations is to reduce their number of regulations, so firms do not have to produce lots of different goods which differ only in the different national regulations they meet. Which means that, if the UK wants to really benefit from the gains to trade, it has to choose one standard to match UK regulations with. And given existing patterns of trade, the UK only really has a choice between two: the EU and North America (NAFTA). Neither is likely to abandon their regulations in favour of what the UK may happen to do. (Equally third countries will never choose to harmonise on UK regulations rather than EU or the US.)

Translate this into Brexit, taking back control is like divorce, except in this case divorce from a partner you are still happy to be with (we happily trade with). To be honest, however, I’m not sure many Leave voters needed convincing of all this. As this poll shows, only 22% of Leave voters thought we would lose full access to the single market. Instead they believed the propaganda they were fed, that somehow their lives were being influenced in a negative way by the EU, and that they would therefore be better off after Brexit

To say, as I did here, that the Brexiters hijacked the EU negotiations, to make them about their own concerns rather than the people who voted, is not quite right. I think it is another example of deceit: getting what they want indirectly because what they want is not in itself popular. EU labour and environmental regulations are popular with most people. So the Brexiters could only achieve their goals through deceiving Leavers, and once more through our partisan or pathetic media they succeeded. After all, the first significant deceit, which was reducing the size of the state by making a fuss about the deficit, had been a big political success.

Normal US politics would want none of this. The US traditionally values the UK as part of the EU, and a jumping off point for their own corporations. Trump is of course not a normal POTUS. He is part of a right wing plutocratic elite that has captured the Republican party, and a good part of the Conservative party. Their aim is to spread his kind of authoritarian right wing politics as far as they can. Trump’s retweeting of Britain First islamophobic materials was no accident. One of his ambassadors has lobbied on behalf of former English Defence League leader Tommy Robinson!

I remember writing sometime back that Trump’s election was a big blow to Brexit. I thought, perhaps naively, that at least some Brexiters would think twice before becoming cheerleaders for Trump. I thought some might be concerned that far from doing trade deals, they would be concerned that Trump seemed more interested in destroying trade by placing tariffs on imported goods. If any have showed any concern I have not noticed. It seems instead that the Brexiters, along with the right wing press, really are the Republican party in the UK.

Stage one of the Brexit endgame that we saw less than two weeks ago was Theresa May at last standing up to the Brexiters in her party. I think she could and should have done this from the very beginning. That she didn’t do so reflects naivety about Brexit rather than strategy on her part. There are many clues that this was so, some of which are spelt out by Jonathan Lis here: getting rid of Sir Ivan Rogers was a huge unforced error that conclusively shows that she and her immediate advisors did not understand the task they had taken on. But it would be suicide for her to turn back from her new path now..

Trump’s attacks on her are another sign of how important her Chequers document is. Of course it is not a plan the EU can accept, but it represents her choice to finally stop the Brexiters turning Brexit into their ideological, Republican orientated plaything. She must know that her new opponents will not be appeased, and do not do compromise. I hope that Trump’s humiliation of her will help her see that global Britain was always a myth, and that the UK has to choose the EU rather than the US. She will need resolve as she is forced to compromise further to get a deal, although she will try to push at least some of that into transition.

Perhaps I am wrong about the final situation being BINO plus face saving for the UK: perhaps the EU will offer serious concessions for the first time in these negotiations. But it is foolish to believe that these concessions will in any way be advantageous to the UK, and somehow make Brexit worthwhile. What gain is there to be outside the single market for services, when exports of products from financial and creative industries to the EU is one of the UK strengths? What gain in there in restricting EU immigration, when most people now agree that immigration enhances our economy and culture, and economists know also enhance our public services. Yes, we would have more sovereignty: the sovereignty to make our lives worse with no compensations.

Whatever deal May finally does with the EU, and at whatever time, it remains the case that Brexit will do for UK sovereignty the opposite of what it claimed. It is better to follow EU rules than US rules, but with Brexit we will be following, with no say in how these rules are changed. It is a huge indictment of our political system that our Prime Minister and a majority of our MPs feel incapable of saying to people you were lied to, and following this course gives you less sovereignty than you had before June 2016. All we can hope for is that the Brexiters, in their new found position of Brexit rebels, will vote against the deal and let parliament, directly or indirectly, kill the whole thing off. The Brexiters will have caused enormous damage, but it would be poetic justice if they helped bring an end to Brexit.