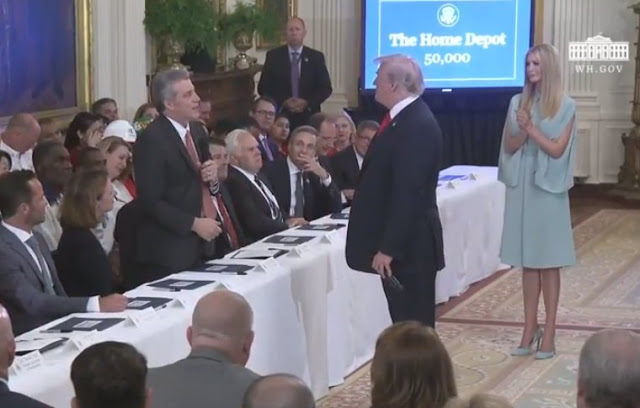 For many years some have seen the US as a form of corporatism* - as a country run in the interests of the corporations and those who lead them. There is considerable evidence that in many senses they are correct. However to see Trump as the epitome of this ‘rule by corporations’ I think misses something important. Trump is different from what went before in important respects.

The way business influenced politicians in the past was straightforward. Campaigns cost a lot of money (unlike the UK there are no tight limits on how much can be spent), and business can provide that money, but of course corporate political donations are not pure altruism. The strings attached helped influence both Republican and Democratic politicians. It was influence that followed the money, and that meant to an extent it was representative of the corporate sector as a whole. The same point can be made about political lobbying.

The government of Donald Trump is different. It is a selective plutocracy, and with one important exception that plutocracy is selected by Trump. In that way it can also be seen as a democratic dictatorship, where the complexity of government requires some delegation of power to other individuals. Like many dictatorships, some of those individuals are the dictator’s family members.

A dictatorship of this form would not be possible if Congress had strongly opposed it. That it has not is partly because the Republican party chooses not to oppose, but also because Trump wields a power over Congress that can override the influence of corporate money. That power comes from an alliance between Trump and the media that has a big influence on how Republican voters view the world: Fox News in particular but others as well. The irony is that under these conditions democracy in the form of primaries gives Trump and the media considerable power over Congress.

The distinction between traditional corporate power ‘from below’ and the current Trumpian plutocracy can be seen most clearly in Trump’s trade policy. It would be a mistake to see past US trade policy as an uninterrupted promotion of liberalisation, but I think it is fair to say that trade restrictions have never been imposed in such a haphazard way, based on such an obviously false pretext (US surpluses good, deficits bad). Trump’s policy is a threat to the international trading system that has in the past been lead by the US, and therefore it is a threat to most of corporate USA. Yet up till now Congress has done very little to stop Trump’s ruinous policy.

The photo above is taken from an extraordinary recent event (watch here) where Trump walks down a line of senior executives, who in turn stand up and say what they are doing for the US and pledge to do more. Each statement is applauded with a positive statement by Trump, as his daughter trails behind. These are top companies: IBM, Microsoft, General Motors etc. It is all a show, of course, but of a kind the US has never seen before. It seems indicative that this is not just a continuation of past corporatism but something quite different. These are corporate executives doing the President’s bidding for fear or favour.

All this matters because it creates a tension that could at some stage drive events. So far the Republican party has been prepared to allow Trump to do what he wishes as long as didn’t require their explicit approval (i.e their votes in Congress), but it has not as yet bent its collective agenda to his. (Arguments that it already has tend to look at past Republican rhetoric rather than actions.) This uneasy peace may no longer become tenable because of developments on trade, or Russia, or the mid-term election results. If enough Republicans think their future is safer by opposing Trump rather than indulging him, they still have the power to bring Trump to heel. But the longer the peace lasts, Trump’s influence on the Republican party will only grow.

* Readers outside the US may be confused by my use of the term corporatism: it is one of those terms with many meanings. I'm using it in the fourth and final sense described here.