If you were hoping for something on yesterday’s interest rate rise, I can only direct you to the leader in the FT today which says: “There is no compelling reason to increase the cost of borrowing in the UK, but there is definitely good cause to wait.” On why nine intelligent people could all make the same mistake, you have to question their mandate, and move to something that focuses on having the right environment for growth, as I do here.

I recently finished reading the latest book by Adam Tooze (of which much more in a subsequent post), and it reminded me of a story that was not told enough in the early days of austerity. Everyone knows about how quickly the Chinese economy has grown over the last few decades, and how strong exports have been an important part of that. In dollar terms the value of Chinese exports more than quadrupled between 2000 and 2007. By 2007 Chinese exports represented 35% of GDP.

An important characteristic of the Global Financial Crisis (GFC) was how quickly world trade collapsed. If we compare the beginnings of Great Recession after the GFC with the start of the Great Depression, while world industrial production moved in a similar fashion, world trade collapsed by much more in the Great Recession than the Great Depression. Here is a chart from Barry Eichengreen and Kevin O'Rourke’s ‘A Tale of Two Depressions Redux’ VoxEU article. 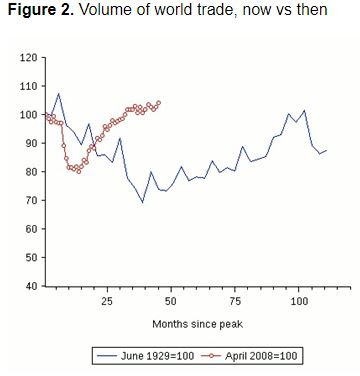 Trade collapsed in the winter of 2008 around the globe, without exception. This was very bad news for China. Whereas exports had been around 35% of GDP in 2007, they fell to around 25% of GDP in 2009. That is a big hole to fill, and if it wasn’t filled, there was a chance that Chinese growth would collapse completely with damaging knock on (multiplier) effects to the rest of the economy. Above all else, China feared the political consequences of the unrest widespread unemployment would bring.

As Tooze recounts, China’s reaction was swift and bold. In November 2008 it announced a stimulus package of public spending worth 12.5% of GDP. (The Obama stimulus package, by comparison, was around 5% of GDP.) “Over the days that followed [the announcement], across China, provincial party meetings were hurriedly convened …” Within a year 50% of the stimulus projects were underway. Some of this stimulus paid for what Tooze describes as “perhaps the most spectacular infrastructure project of the last generation anywhere in the world”, the Chinese high speed rail network. Monetary policy was also relaxed.

In 2008 as a whole, before the stimulus and hardly touched by the collapse in world trade, Chinese GDP grew by 9.6%. In 2009, when GDP in the advanced countries fell by 3.4%, Chinese growth was 9.1%. The stimulus package had filled the whole left by collapsing Chinese exports. (Source)

Basic macroeconomic theory says that a negative shock to GDP, caused for example by falling exports, can be completely offset by a monetary and fiscal stimulus. China is a good example of that idea in action. What about all the naysayers who predicted financial disaster if this was done? Well there was a mini-crisis in China half a dozen years later, but it is hard to connect it back to stimulus spending and it had little impact on Chinese growth. What about the huge burden on future generations that such stimulus spending would create? Thanks to that programme, China now has a high speed rail network and is a global leader in railway construction.

Now of course people will say that China is not like an advanced democracy, and it was not part of the global banking network that caused the GFC. But the US and UK stimulus programmes could and should have been larger. Those close to the action tell me that the UK was running out of things to spend more money on in 2008/9, but I cannot help think this amounts to a failure of imagination: it is not as if UK infrastructure is great, there are no flood defence projects left to do etc. Above all else China’s example tells you what a huge mistake 2010 austerity was.