Mediamacro is in rude health, and is also indicative of a deeper failure

A key part of my forthcoming book is about mediamacro. Mediamacro is how the macroeconomics of fiscal policy is presented in the media as if the government was a household. It is as if Keynes, and the General Theory that is often said to have begun macroeconomics as a discipline, had never existed. What every first year economics text book tells students is that the government is not like a household.

Mediamacro has become so ingrained in the UK media for two reasons. The first is that one of the two main political parties, and their associated press arm, have pushed it for all its worth, while the other political party has not challenged the idea in any systematic way. But if you ask many Labour MPs why they have not challenged it they will say that doing so is too difficult. This leads to the second reason.

Most political journalists are not economists. How households work they do understand, but the idea of using fiscal policy in a recession to support the economy is more difficult for them. What is true for political journalists is also true for most voters, and journalists wish to keep it simple and understandable only reinforces mediamacro. The same thing influences politicians who listen to focus groups.

I was reminded of all this when the Prime Minister lied in saying I thought Labour’s 2017 manifesto wouldn’t add up. What I actually said was that it would be good if it didn’t because the economy at the time was stuck at the ZLB and needed a fiscal boost. She was not interested in this. For her and her party saying the ‘numbers did not add up’ was sufficient to say that taxes would go up and jobs would be lost. The whole point I was making was that jobs would be gained and taxes wouldn’t need to go up because of simple Keynesian effects,

I had forgotten that the IFS analysis didn’t only say that Labour were being over optimistic on the tax part of their programme. Here is a chart from their presentation. 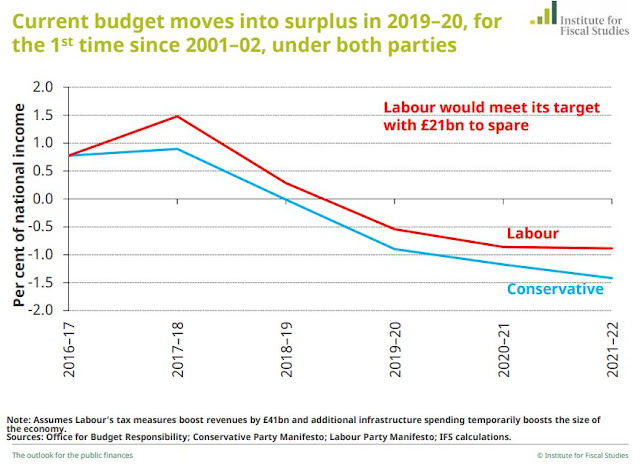 This chart is based on the IFS’s assessment of what Labour’s tax increases would bring in. Labour’s fiscal rule is to achieve current balance after 5 rolling years. As the chart says, even with their numbers ‘not adding up’ they meet their rule comfortably, with £21 billion to spare.

Do you remember this being widely reported in the media at the time? Of course not: the dominant story from the IFS’s presentation that the media took away was the numbers not adding up. So much simpler and catchy than Labour would easily meet its fiscal rule. The power of this story for the election was somewhat blunted by the fact that the Conservatives did not present any costings at all, but they will not make that mistake again. [1] But every budget day the focus is on marginal changes in deficits over five years which have an economic importance in themselves of virtually zero.

The problem of keeping economics simple so it is media friendly is not just about mediamacro. Departmental budgets are all about whether amounts are increasing or decreasing when sometimes this is wildly misleading. Education is currently a good example: a constant budget in real terms does not deal with the fact that pupil numbers are increasing so spending per pupil is falling.

The clearest example is the NHS. You hardly ever hear it said that the NHS budget needs to increase over time, even when measured as a share of GDP. Just look at this share over the last half century. That trend is easily explained. Yet it is almost never explained by journalists, who instead fall for the line that keeping real spending fixed ‘protects’ the NHS. You can see this lack of explanation in the public’s attitudes to the NHS.

This is but one illustration of why what the media says matters, because it has a strong influence on public attitudes and opinions. The evidence for this is now overwhelming. Will Jennings talks about a number of studies, and I have mentioned others in my posts.(e.g. here). I talked about a paper looking at the media’s influence on attitudes to austerity and the deficit here. I cannot remember if I included this paper, which looks at the influence of Murdoch’s switch in support before the 1997 election. Similarly for this interesting study, which showed that attitudes towards welfare recipients worsened after the 2011 riots, but only among those who read newspapers. It shows that the print media can be opportunistic in influencing how real world events are interpreted. It helps snake-oil sellers peddle their wares.

Press bias increases the need for the non-print media to educate and explain as well as entertain. It can do that by thinking about economic and other policy issues where abundant evidence exists as if they were like scientific issues rather than political issues, requiring expertise or links to expertise to help explain them. We need to move away from giving priority to Westminster political gossip, and giving political balance priority over facts and evidence.

[1] I criticised the IFS’s analysis at the time because they only allowed for positive macro effects (using the OBR’s numbers) for the additional public investment, and not for the large balanced budget fiscal expansion (and if they were right, a smaller debt financed expansion).