A few things you probably won’t read about what the Chancellor announced yesterday. You will have read that the budget measures as a whole amounts to a significant fiscal giveaway. In which case the following chart may appear surprising. 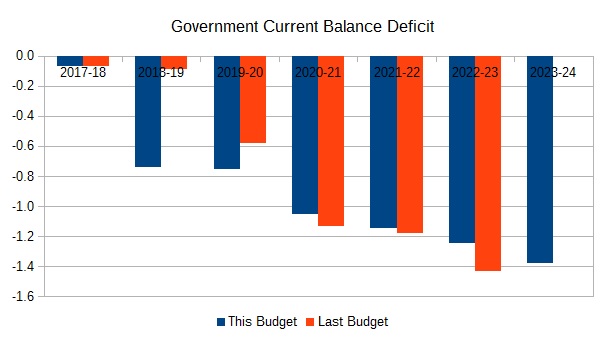 Negative numbers represent a current budget surplus, and growing surpluses are a fiscal tightening. You can see that with the exception of this fiscal year, when policy is tighter, the current balance profile of rising surpluses has not changed very much. The reason for this apparent contradiction is simple enough. If nothing had been done, the higher taxes than forecast represents a significant fiscal tightening compared to previous expectations, albeit a tightening that represents forecast error rather than policy decisions. [1] What the Chancellor did yesterday from next year onwards is restore the policy stance to what it was before the forecast error was discovered.

What this means is that the Chancellor has kept his path of modest fiscal tightening over the next five years, As I have said many times, this is simply not appropriate in a situation where interest rates are close to their lower bound and the immediate outlook is highly uncertain. But then this government has never understood about monetary and fiscal coordination.

Labour’s fiscal credibility rule (fcr) allows us to see how differently a Labour government would run the non-investment part of fiscal policy. The ficr requires the government to aim for current balance in 5 years time. That, of course, is zero on this chart. That tells you that, if this is indeed the path the current balance follows, Labour will have extra spending or lower taxes than the Conservatives worth over 1% of GDP. That covers the gap the IFS suggested in their costings from the 2017 manifesto with plenty left over.

As I have already suggested, Labour’s overall fiscal stance if they stick to the fcr makes a lot more sense The Conservatives are trying to reduce the level of debt to GDP by too much prematurely. That does not make sense from a precautionary Keynesian point of view, or from a simple tax/consumption smoothing point of view. But macroeconomics remains an excluded consideration from Conservative/Treasury budgets, and mediamacro pretends the government is just like a household that needs to pay off its debts within its lifetime.


[1] Suppose the forecast error was X. Then imagine that error had not occurred, but the Chancellor had raised taxes by X. The latter would clearly be a fiscal tightening by the Chancellor. But in macroeconomic terms taxes rise by X in each case, so the two are equivalent.

Email ThisBlogThis!Share to TwitterShare to FacebookShare to Pinterest
Labels: 2018 Budget