Are you exhausted and exasperated by Brexit? Do you despair when our foreign secretary compares the EU to the Soviet Union just because the EU will not change their rules to give us what we want? Do you wish that we could go back to how it was before Brexit? If so, I wrote my forthcoming book “The lies we were told” just for you. (It can be ordered at a 20% discount here, rising to 35% if you join the publisher’s mailing list.)

One of the posts in the book, written at the beginning of March 2016, anticipated a lot about the forthcoming campaign and how it would play out. I wrote

“The EU referendum is therefore another test of how much economic expertise can influence public opinion. As regular readers will know, we have been here before, and not just on austerity.”


One of those examples was the 2015 general election, which forms one of the nine chapters in the book.

As background, here is I think the best illustration of how poor the UK recovery from the 2009 recession was (from The Resolution Foundation). 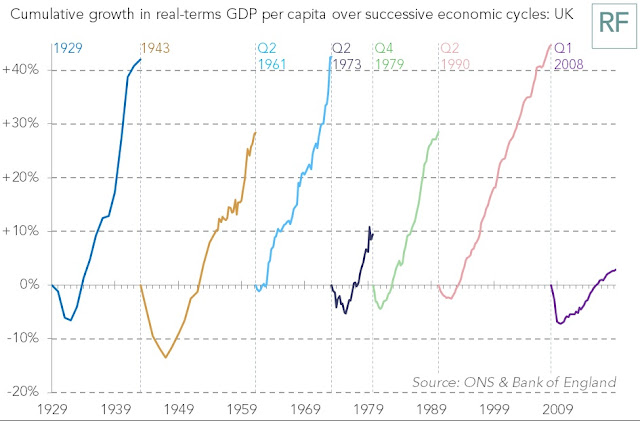 As we can clearly see, the post-2009 recovery was slower than anything we have seen in the last 100 years. Now sometimes governments can be unlucky, as the economy follows events that they cannot control, but the recovery after the Global Financial Crisis was not like that.

In this chart, using OBR data, I compare the cyclically adjusted primary balance during the last three recessions. 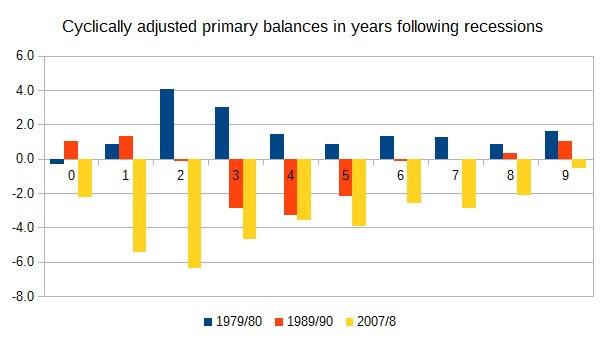 The ‘monetarist recession’ is more complex. During 1982 interest rates were reduced steadily from nearly 15% to 10%, but famously the April 1981 budget led to a sharp fiscal tightening (leading to the famous 364 economists’ letter). Contrary to right wing and media myth, the economy’s response to this contradictory mix was to grow at around the trend growth rate, so not a true recovery (by which I mean growth above trend, so we catch up with that trend). We only got a true recovery from 1983, when fiscal policy relaxed alongside monetary policy.

This is textbook stuff (hence the 364 letter). In early 2009 UK interest rates hit their lower bound, so fiscal expansion was needed more than ever, and that is what happened under Labour. But the Conservatives bought the myth about 1981, carefully cultivated by the Institute of Economic Affairs and swallowed by the media, that the 364 economists had been wrong, so in opposition they opposed the 2008/9 and 2009/10 expansion and in government started a fiscal contraction, a contraction that only came to an end in 2017.

The inevitable consequence was the weakest recovery for a 100 years. Combining a weak recovery with a large 2008 depreciation of sterling meant incomes literally stagnated for 7 years, as another chart from the Resolution Foundation shows. The Conservatives did not admit their mistake and pledge not to do it again, but preferred to create a false narrative instead. 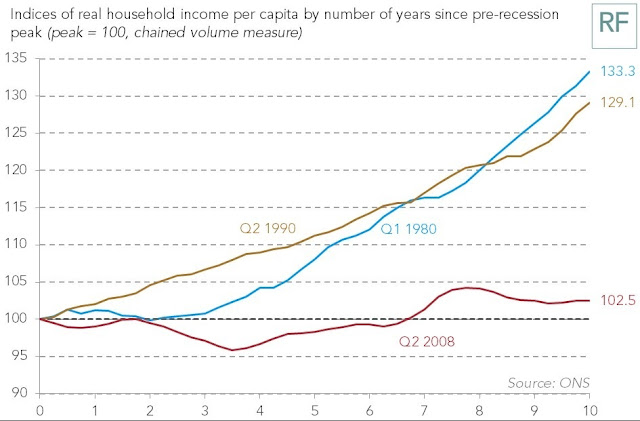 The lie was the story of a profligate Labour government and how the Coalition government had been forced to clear up the mess. Voters bought it. Coming into the 2015 general election, polls suggested the economy was the Conservatives' strong point. They did so in part because the media never challenged the story, which was obviously false from just a brief inspection of the data. Rather than look at the data they preferred to talk to City economists (and not academics), and most City economists have an interest in backing a Conservative line and talking up the power and threat from the market. In that sense the media played a key role in winning the 2015 election for Cameron, which of course was the only way a referendum could happen. Evidence to back up all this is in the book.

The Conservative party has never acknowledged their austerity error, and so we have every reason to think they would do the same again if another recession came along. Much of the media still prefer to let politicians make any nonsense economic claim they wish, and they rely on other politicians to challenge them rather than confront them with the facts or expert consensus.

Having leading politicians spin a disastrous economic policy with lies and without challenge from the media did not start in 2016, but in 2010. Elsewhere in the book I try and explain why politicians on the right went off the rails in 2010, and also why the media facilitated a majority of the country going with them