I have finally got around to reading this excellent CEPR ebook on Germany’s exceptional recovery. That German GDP growth since the Global Financial Crisis (GFC) is higher than average Eurozone growth or French growth can be seen below. 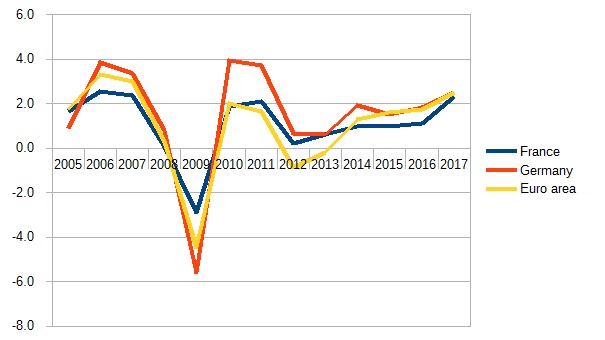 However the relative performance in terms of unemployment is remarkable. 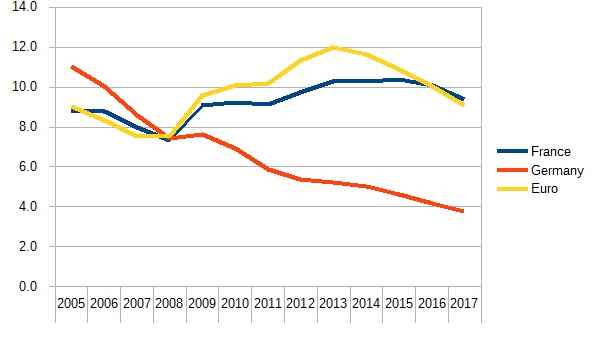 The tremendous success in reducing unemployment is discussed in two papers in the book, and both suggest that it had more to do with changes in the nature of firm-union bargaining than the Hartz reforms. (John Springford has a nice chart showing how the German Phillips curve has shifted.) I have for some time noted how wage increases in Germany after 2000 were too low in the context of a 2% inflation target, and this helped drive an export boom and is a factor behind a huge current account surplus of 8% of GDP.

Other chapters in the ebook argue that there were other, perhaps as or more important,  factors behind this export boom, and I’m convinced that other factors did play a role. However the point I want to make in this post is that, as long as these factors are permanent, they imply that the real exchange rate in Germany has to rise at some point. This is exactly the same point as saying that not all of the German current account surplus of 8% is structural. Some of that surplus is because the German real exchange rate is undervalued.

There are two ways the German real exchange rate can appreciate. The first is via an appreciation in the Euro, and the second is for German inflation to be higher than average Euro area inflation. Below is a chart of one measure of competitiveness for both Germany and the Euro area. 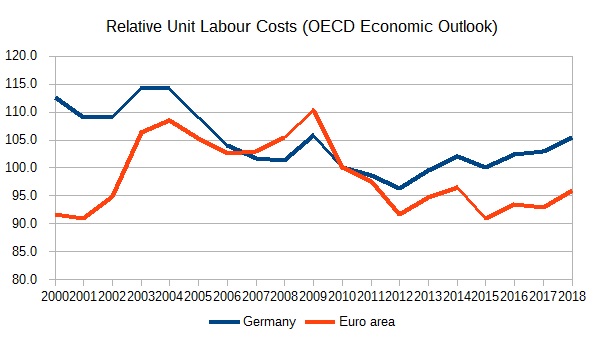 The level is arbitrary: it is how the two series move over time and relative to each other that matters. You can see how Germany gained competitiveness.over other Eurozone countries from 2000 to the GFC. You can also see how that gain has been partially but not fully unwound over the last 7 or 8 years. Looking at Euro area competitiveness, it is a little below its average level over the past and also its level in 2010 when I calculated it was close to its equilibrium rate to the dollar. (This work was unpublished, but uses a similar model to the one I used to calculate the optimal entry rate of Sterling into the Euro as part of the 5 tests.)

So there is perhaps some scope for a further appreciation in the Euro, but it seems unlikely that will be enough on its own to achieve the required German real appreciation. German nominal wages have increased by more than the Euro average in recent years, but the differences have been small. That difference needs to increase to get Germany's real exchange rate to sustainable levels. Germany should not think of that as a problem, but rather the way their export success has to be translated into higher incomes for German workers..