The post-Brexit vote trade boost that never was

There is still a huge disconnect between the reality of the state of the UK economy since the Brexit vote and media perceptions. I heard one presenter on BBC News say the economy is doing pretty well following the Brexit vote. The reality is very different. According to the latest CER study the economy is 2.5% smaller than it would have been without that vote, which is nearly £2000 per household. We are back in the situation we were in before the 2015 election, where the reality for most households was pretty bad but the media kept on talking about a strong economy.

But why has the Brexit vote had such a large negative impact on the economy, when Brexit has not happened yet. When I talked about what to expect immediately after the vote, when Brexiters were arguing that the collapse in sterling would be a big boost for the economy, I tried to point out that any boost would be temporary, because sterling had fallen for a reason: trade could become more difficult. That was a major reason for the depreciation, to compensate for future trade barriers. (I elaborated here, and talked about why real wages were falling here.)

It looks like I was being too optimistic. Here, from the ONS, is the breakdown of what contributed to GDP growth in each quarter since the vote. The contribution of net trade (the yellow bars) is always erratic, but there is no clear positive contribution emerging. 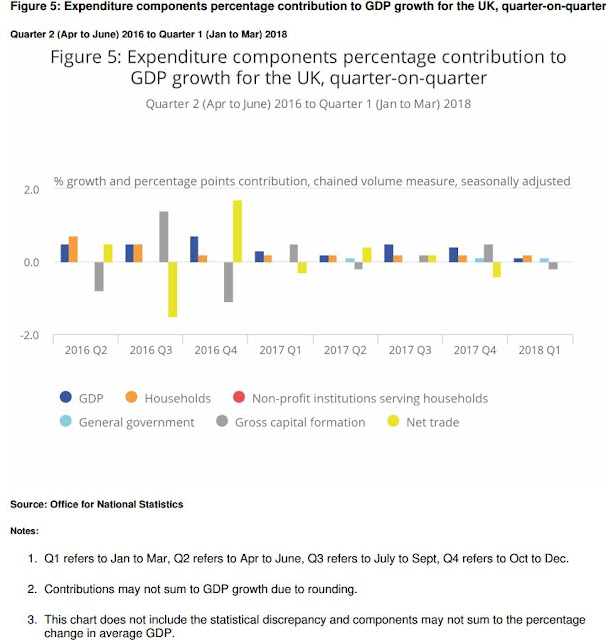 This aggregate data is backed up by the survey evidence from the manufacturing sector  reported here. Many firms have already lost export orders as they were cut out of EU based supply chains because of Brexit. A recent study from INET and Cambridge found that firms were either not entering into new agreements to export products because of Brexit or were more likely to exit from such agreements. Most recently another study used statistical methods to estimate what trade would have been without Brexit, and this suggested that exports to both the EU and non-EU were not increasing as you might hope as a result of the depreciation.

That exports to non-EU countries are lower as a result of the Brexit depreciation might seem puzzling, but it is important to remember the number of trade agreements that the EU has with other countries, which we will probably lose under some types of Brexit.

What is going on here? Why are exporting firms not increasing their volume of exports in the short term to benefit from the competitive advantage they have gained at least before barriers to trade are erected? No doubt some are, but they are being offset by others that are decreasing exports because contracts are getting cancelled or it is just not worth continuing to export or enter new markets.

The reason is something that trade economists have known about for decades. Trade involves important fixed costs. Supply chains have to be established, or the infrastructure to trade in overseas markets has to be set up. That means that those setting up supply chains do not want to be changing them every year, and as a result find it too risky to include UK firms when various barriers might arise as soon as March 2019. Equally firms selling direct to overseas consumers find that the investment required to set them up is greater than any profits they might only make for a few years.

All this would not matter so much in terms of GDP if similar things were happening to imports, but the most recent study I surveyed suggested this was not happening so much to imports. An important reason why exports are hit more than imports is specialisation. Increasingly there are products which the UK does not produce, so it is more difficult to substitute from overseas to domestic production. In contrast exports are generally competing with producers from many countries, so substituting from a version of the product coming from the UK is much easier. That I believe is an important reason why sterling fell so much after the Brexit vote.

Although all this is painful for people in the UK, it is also interesting for a macroeconomist. We have a ‘natural experiment’ involving a future event, but with the complication that what the future event exactly is remains uncertain. The negative impact on investment is exactly what we would expect: it is always safer to wait and see. The negative impact on exports is rather different from what standard models would imply, but can be explained by well known trade theory. The impact on consumption has perhaps been less than many expected, but that could be explained by many having incorrect expectations of what Brexit means for their future incomes. All this shows how important expectations are and how misleading naive expectations processes would be, but also why it is often important to allow for how distorted information sets can generate errors from rational expectations.