Helping the left behind: its (economic) geography, stupid

In our national conversation we are familiar with talking about regional divides (most famously north/south), and nowadays that tends to amount to London versus the rest. This conversation has in the past talked about the countryside and the towns (remember the countryside alliance and their march on London). But the political divide that has become clear since the Brexit vote (and which is also clear in US support for Trump) is between towns and cities (see Will Jennings here (pdf), for example).

This political divide has economic roots. Martin Sandbu points us to a report from the Brookings Institution which looks at similar trends in the US. The report says

“For much of the 20th century, market forces had reduced job, wage, investment, and business formation disparities between more- and less-developed regions. By closing the divides between regions, the economy ensured a welcome convergence among the nation’s communities.”


But from the 1980s onwards, they argue that digital technologies increased the reward to talent-laden clusters of skills and firms. The big cities started growing faster than the small cities, and the small cities grew faster than the large towns etc. This trend has continued following the GFC, as this chart clearly illustrates. (For some UK evidence on regional disparities, see here.) 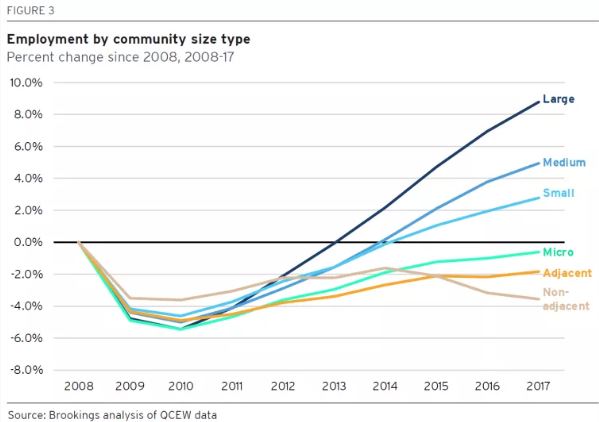 This reminded me of a passage in Paul Krugman’s account in 2010 of 20 years of what has been called the New Economic Geography.

“... a fairly eminent economist challenged some of us, in belligerent tones, for any evidence that increasing returns and positive external economies actually play any important economic role. I think I replied “Cities” – to be greeted with a stare of incomprehension.”


What the New Economic Geography that Krugman helped found shows is that increasing returns and positive external economies make cities a great place to set up a new business, and rural backwaters a place where businesses stagnate. To relate back to the Brookings report, digital technologies have greatly increased the importance of increasing returns and positive external economies. This is why most big cities thrive, and many small cities and most towns fall behind.

If that all seems terribly fatalistic, it is important to remember that something else happened around 1980. Some of us can remember before the advent of neoliberalism the effort the UK government put into industrial and regional policy. No doubt some of that effort was misdirected, but it probably had some effect at leveling out economic development. One of the key assumptions of neoliberalism is that state activity of that kind is just unhelpful messing with the market mechanism, and that messing just holds back growth.

However one of the lessons of the new economic geography is that initial conditions matter: trees from acorns grow, and the state can have a huge role in nurturing acorns. A well thought out industrial and regional economic policy, that works with rather than fights against dynamic economic forces, can make a big difference. As the Brookings report suggests (see a second article from Martin) we have successful examples to show us how it can be done.

To see how much our current economic environment in the UK is going in the wrong direction, think about post-school education. Universities are essential, and can play a key part in helping innovation, but they produce students most of whom have already become detached from their home and can easily migrate to the dynamic cities. The further education sector, by contrast, tends to provide essential skills to a local workforce. Yet this sector has lost a third of its income since 2010 thanks to austerity. What better way to turn small cities or large towns into places where the workforce is only equipped to host another distribution centre?

One final point. Brexit contributes nothing to helping small cities and towns. If you make the UK a less attractive place to set up a business by making exporting harder, and skilled labour more difficult to find, that business will move from a UK city to a city in another EU country, rather than some declining town in the UK. That is already happening, and the process will continue if Brexit is not stopped. Brexit is not only a damaging exercise which will make the lives of people in the UK harder, it distracts us from doing something positive for those left behind.