It now looks like May will not get a chance to put her deal to parliament for a third time today, thanks to a ruling from Speaker Bercow. Yet while some compare Theresa May’s relentless and humiliating quest to get her deal passed by parliament to the Black Knight from Monty Python’s the Holy Grail, and Bercow believes the deal has to change for it to be voted on again, there would have been a critical difference this time.

Previously rejection has meant nothing except that we get closer to leaving without a deal. No deal is what economists might call the ‘bliss point’ of many Brexiters. The outcome most Brexiters want is what they call a ‘clean break’ with the EU. Before parliament agreed to delay rather than crash out, it was obvious the Brexiters would vote against May’s Withdrawal Agreement.

If the Withdrawal Agreement had been voted on today (and May could well have pulled it herself anyway because she believed she would lose again), rejecting it would have almost certainly meant a long delay to Brexit rather than crashing out. That may be a crucial difference for many Brexiters, including the DUP. A few have already said that they would have supported May’s deal this time, and others appear to be looking for ways to change their minds. So the vote would have been closer than last time it it had been held.

Given this, I have never understood why May kept No Deal on the table for so long. It was obvious that most Brexiters preferred No Deal and would therefore inflict embarrassing defeats on the Prime Minister. In contrast the threat of No Deal does not seem to have kept the few MPs on the opposite wing on board. All I can assume is that she really believed the David Davis mantra that the EU would cave at the last minute for fear of the impact of no deal. If so that was a huge misjudgement, to be added to the already long list of huge misjudgements she has made over Brexit.

Now she has finally said a long delay is the alternative to her deal passing, the Brexiters would have a real dilemma if the deal was voted on again. A long Brexit delay does not take No Deal completely off the table, but it makes it much less likely than before. It also increases the possibility of a second referendum. To understand the dilemma the Brexiters would have if May were allowed to and had put her deal to parliament for a third time, we have to enter the make-believe world of ‘Global Britain’. Of course Global Britain appeals to the English nostalgia for empire that runs deep within Brexit, but to most Brexiters it is much more than that.

Conventional economic analysis tells us that leaving the EU’s Customs Union and Single Market will reduce the amount of trade the UK does with the rest of the world. The reasons are obvious, and I think are privately accepted by most Brexiters. Their main line of defence during the referendum was that the EU would give us all the benefits without the costs, which we now know conclusively is not true. While some Lexiters might be attracted by the idea of a less global UK (because they blame globalisation for deindustrialisation), Brexiters do not want less trade. Their idea of Global Britain was to do more trade with non-EU countries to offset, in the longer term at least, the loss of trade with the EU.

The Irish backstop in the Withdrawal Agreement (WA) effectively rules out Global Britain. Most trade deals involve tariff reductions, and if the UK is in the EU’s Customs Union it cannot unilaterally reduce its tariffs to make new trade deals. Theresa May and Liam Fox may pretend otherwise, but most Brexiters know this to be the case. The more May moves to appease the DUP by promising that EU rules in Northern Ireland will also be adopted by the rest of the UK, she restricts yet further the scope of independent (from the EU) UK trade deals. Without tariff reducing trade deals with emerging countries and the US, Brexiters believe there will be a decline in the amount of trade the UK does with the rest of the world, and that will be harmful to the UK economy.

That is why some Brexiters insist that May’s deal is worse than staying in the EU. But others will point out that the WA does allow the UK to move away from many of the rules of the Single Market, which in their eyes is an important part of Brexit. A few may pretend to themselves that the backstop can still somehow be subverted once we have left, or even that No Deal can still be achieved after approving the Withdrawal Agreement by rejecting enabling legislation. They may say that it would be extremely ironic and embarrassing if Brexiters by their own actions stopped Brexit happening. Those still opposed to May’s deal will respond that those who vote for it own it, and if trade and the economy subsequently decline voters will blame those who voted for May’s deal.

Behind all this is the influence of Conservative members. The departure of Nick Boles, who left his Conservative Association before he was pushed, reflects a new mood of militancy among the Tory grass roots. Boles had voted for May’s deal, and his crime in the eyes of party members was that he also campaigned against no deal. With some of the Brexiters hoping to succeed May, their decision is all about pandering to this electorate.

In truth this debate is upside down compared to the real world. I describe Global Britain as make-believe because all reputable studies suggest new trade deals cannot come close to offsetting lost EU trade. A key reason is what economists call gravity. Gravity is the observation that countries trade more with their neighbours than those far away, a robust finding that appears to hold despite falling transportation costs. That means that even if the UK after Brexit could get lots of tariff reduction deals with countries outside the EU (a big if), this would not come close to making up for the lost trade with the EU. The government’s own analysis comes to the same conclusion. By keeping us in the Customs Union, May’s deal actually helps the economy, although as I outlined last week leaving the Single Market is still very costly.

Brexiters always refer to how much faster countries outside the EU are growing. But this is like giving up your solid 40 hour a week day job to work just one hour a week for a rapidly expanding firm for the same hourly pay. Because the firm is rapidly expanding you could be working 2 hours a week within 10 years! This is something few in their right minds would do in real life, so why should we do the equivalent as a country?

Brexiters prefer to ignore the analysis of the overwhelming majority of economists, and instead look to the tiny group of Economist for Free Trade (EFFT). But as Chris Giles has recently shown, if you look at how the GDP forecasts of various groups just after the referendum have been doing recently, those of EFFT have been wildly optimistic compared to others. As the chart shows, EFFT (then Economists for Brexit) did well in the first few quarters after the referendum because many consumers dipped into their savings, but by the end of 2018 EFFT were doing much worse than the OBR, Bank of England and the consensus of private sector forecasters. Giles sums this up by saying “The lesson is simple: listen to economists, but not to those peddling a political line.” 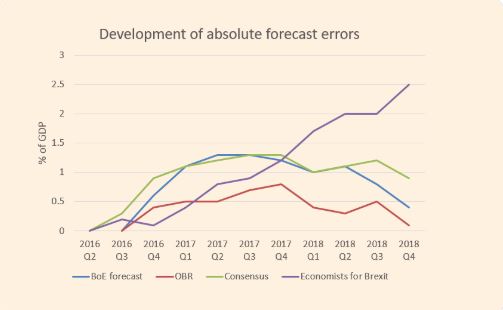 So the only economists who really believe in Global Britain have already been shown to be far too optimistic about the impact of Brexit. No doubt they would say that is because May’s deal prevents Global Britain, but it is clear from movements in sterling that the foreign exchange markets fear No Deal most of all because of the impact this would have on trade. The Brexiters have a wonderful way of avoiding these facts. As the consensus among economists is that trade will suffer if we leave the EU, economists overwhelmingly favour staying in the EU. The Brexiters then conclude that if they favour Remain they therefore must be biased. Ergo only the predictions of economists who believe in Global Britain can be trusted!

There would be a certain horrible symmetry if May’s Brexit deal had passed this week. It would have been a narrow victory, just as the EU referendum result was narrow. It would be a victory tainted with public money used to bribe Labour MPs and the DUP, while the referendum vote was won by the Leave side spending much more private money than the rules allowed. Both victories would have been won against a weak and divided opposition: Cameron unable to talk about the virtues of immigration and Corbyn unable to campaign against Brexit. Both May’s deal and the referendum victory are based on lies designed only to get them across the line. Both are blind, with no clear idea of the kind of Brexit that will follow. Both therefore fail basic notions of legitimacy.

If Bercow prevents May putting her deal before parliament again in the near future, or if she decides herself she would not win anyway, then her failure to pass her deal on 12th March involves a delicious irony. Brexit failed to happen because of the actions of Brexiters themselves, because they actually believed one of their own lies: the make-believe of Global Britain.