Left behind movements do not just reflect deindustrialisation, but also geography, inequality and lack of representation.

There was extensive analysis after the UK EU referendum of the characteristics of those who voted for Brexit and those who didn’t. A robust finding was that those who voted for Brexit tended to be older and had less years of education. But some noted a link between a tendency to vote Leave and areas of deindustrialisation. The idea of the ‘left behind’ was born. It gained force when rest-belt states in the US swung to Trump in the same year.

This characterisation of the left behind was attractive to many on the left, who have been critical of the globalisation they saw as the cause. Yet as Martin Sandbu points out, the period of what is often called hyper-globalisation is the 1990s, and much deindustrialisation occurred before then. Some of that was a result of automation rather than globalisation, and in the UK 1980s deindustrialisation was hastened by a large appreciation of sterling caused by a combination of discovering North Sea Oil and monetarism. Why the 30 year delay for the left behind to finally find its political voice?

If we look at the geography of the Brexit vote, areas of deindustrialisation is not the only thing that strikes you. Much more obvious is that people in large cities voted against Brexit, and those in smaller cities or towns or the countryside voted for Brexit. The same was true for Trump, and Trumps core support comes from rural areas. Is this simply a consequence of differences in age and education already discussed?

It could well be. As the Centre for Towns showed, UK villages and towns have been getting older and cities have been getting younger. Jobs that attract the university educated tend to be in cities rather than in towns and villages.The old tend to be more socially conservative, and so are attracted to the anti-immigration message that was a key part of the Leave and Trump campaigns.

There is no doubt these factors are important, but do they explain all the the geographical nature of the support for Brexit and Trump, or is there more to it? I think the gilet jaunes from France can shed some light on this question. As John Lichfield outlines, the gilet jaunes come from peripheral France: the outer suburbs and countryside. That may include some areas of deindustrialisation but it goes well beyond that. Their protests are self-organised and remarkably persistent. They do not fit any clear left/right categorisation. Immigration, or race, are not high up among their concerns, which is why they do not feel represented by the far right party of Marine Le Pen.

What do the gilet jaunes want? Specific demands are varied and often contradictory. But a dominant theme is that they want to be valued and represented. They feel that the centres of power in France, the government but also other organisations, do not speak for or even respect them. They think the major cities are getting all the benefits of growth while they are falling behind.

The gilet jaunes tend to be working or lower middle class, sometimes self-employed, sometimes retired. Initially their protests were sympathetically viewed by most French voters, which was one reason why Macron responded with tax breaks for pensioners and low income workers. As time goes on and the violence has continued their popularity among French voters has waned. Whether they have a future as a coherent force may depend on whether they can transform themselves into a conventional political group that wins seats in the forthcoming European elections, a process which has already led to some fragmentation along traditional left/right lines.

Macron’s election as President of France had led many to think that the wave of populism influencing democracies around the world could be held back or even beaten. What the gilet jaunes show is that this cannot be done just by electing a charismatic President. Indeed the character of Macron, clearly part of an affluent city elite, may even have been a provocation.

Can the gilet jaunes tell us anything about those who voted for Brexit or Trump? All three movements come from outside of the main cities, so perhaps geography is more than just an incidental factor. What is unique about the gilet jaunes has been self-organisation, made possible through social media, and the variety of their political demands. In contrast Trump is a Republican, and Brexit is a very specific cause. But perhaps this difference just reflects the ability of some politicians and parts of the media to capture the discontent of the geographical areas that feel left behind?

The EU was not considered an important issue among most voters until the referendum. Immigration was, but a good part of that was because the government and press had managed to deflect anger at declining public services and wages on to immigrants rather than their own policies. Whereas the gilet jaunes had to organise themselves using social media, Brexit and to some extent Trump had sections of the conventional media to do that job. While many gilet jaunes want to overturn the government, Brexit supporters succeeded because they had the help of politicians and the media.

Underlying causes in all three cases include geographical and financial inequality, and a feeling of being ignored by conventional politics. In the UK, looking mainly at the first decade of the century, a NEF report found that nearly all of the 20 fastest growing constituencies were in cities. Often the prosperity of towns depends on the success or otherwise of a nearby city. Those in the periphery see money going to projects like crossrail or HS2 while local bus services are cut.

People look at others to measure their own prosperity but they also look at their own past. In the UK real wages are still below levels before the financial crisis, and in the last year the disparity between the incomes of most people and those at the top of the income distribution has started to increase again. (It is one reason why the Chancellor is getting more tax receipts than he expected.) In the US most of the proceeds of growth have for some time been going to the top of the income distribution.

We can see the same thing, although to a lesser degree, in France. Here is a revealing graph from a study by Thomas Piketty and colleagues. It shows how average annual growth rates of pre-tax income has varied by where people are in the income distribution over three time periods. To the right we have the richer income deciles, including at the end the top 1%, 0.1% and 0.01% respectively. In the two periods before the 1980s incomes at the top grew less rapidly than all other groups. From 1983 to 2014 the opposite has been true: growth rates of top incomes have been up to three times those of everyone else. In addition the growth rate of incomes of the non-rich have been historically low. 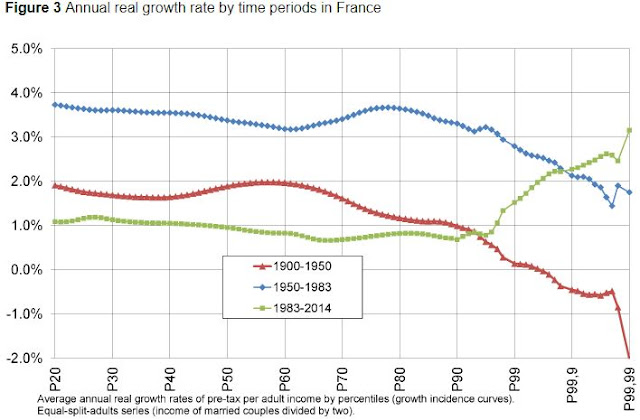 Low average growth in most incomes together with much faster growth in incomes at the top is provocative, particularly if you are in parts of the country that are stagnating with few prospects. I do not think it is any coincidence that a week ago we saw the gilet jaunes targeting the exclusive shops and restaurants of the Champs-Élysées.

Inequality based on incomes or geography is not enough to get the gilet jaunes on to the streets, to get UK voters to want to take back control, or Trump voters to vote for the worst President in a century. This also requires a feeling that your voice is not heard in the political process. In the UK a feeling of powerlessness was hijacked by politicians and the press who pretended it was a result of the EU, or in the US by Trump who pretended to speak for ‘real America’.

Speaking up for those left behind should naturally be something parties on the left do. Yet in the UK, as the NEF report shows, Labour have been increasing their vote share in dynamic cities and the Conservatives from areas in decline. This may be part of a longer term trend in both the UK, US and France, where the left party that once represented the less educated now is the party of the educated. The chart below taken from another study by Piketty shows this trend, which he calls it the emergence of the “Brahmin Left”. 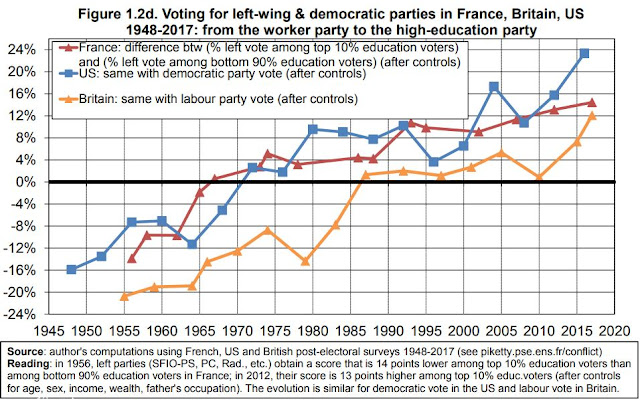 Yet I think this alone is an incomplete explanation. To explain recent developments we should add the adoption by traditional left parties of a neoliberal framework which discouraged regional, industrial and redisributive policies that might have transferred more of the benefits of city dynamism to the periphery. That created a left behind that went beyond areas of deindustrialisation, that felt unrepresented and deprived, and which in the UK and US was open to capture by a populist right.