.The hallmark of a science is not just having refutable hypotheses, but also changing its view when data shows the theory is wrong. Economics is often accused of not being a science. A good test case to see if that is true is the minimum wage. Basic economic theory suggests if you fix wages at above their level in the market, employment will fall as less workers are employed. However a number of empirical studies, the most well known of which was written by Card and Krueger in 1994, have suggested that employment shows no noticeable decline when a minimum wage is imposed or modestly increased. My reading is that the most convincing studies do show this result, but not all do, so the picture is not completely clear.

This illustrates a problem for economics (and all social sciences) that outsides often fail to appreciate. Measurements and econometric studies are often not conclusive, and even in the case of austerity you can find one or two empirical studies which says something different to all the rest. As a result, it is more difficult to use data to show a hypothesis is conclusively wrong in the way the natural sciences can. My own view is that the balance of studies clearly shows a modest minimum wage has no noticeable impact on employment, but others would disagree.

Here is a question from the IGM survey.of around 50 top US economists on the minimum wage 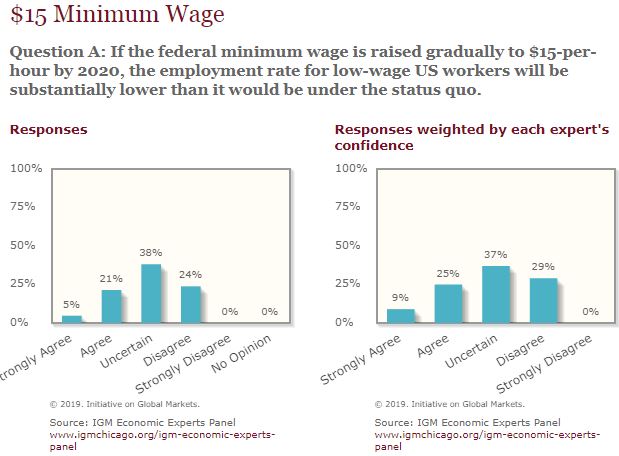 Academic economists appear evenly divided, and few hold a strong opinion on the issue. A similar survey of UK economists, asked about the 2016 increase in the minimum wage, was also divided but lent more towards no effect. In contrast, most German economists appear to have been opposed to the recent introduction of a minimum wage.

If you were cynical you might say that all this shows is that the views of economists just reflect their political opinions, and I would indeed expect there would be a clear correlation to support that with the minimum wage. However when either theory or evidence are pretty clear, economists do not divide by political opinion. The same survey in 2012 and 2014 showed economists largely agreeing that the Obama stimulus reduced unemployment and was beneficial, even though the political right was strongly opposed to it. The reason is that economic theory and nearly all evidence shows that fiscal expansion when interest rates are stuck at their lower bound is expansionary.

Equally standard microeconomic theory is just as clear that the minimum wage will reduce employment, and I suspect that had this survey been done in the early 1990s most academics would have agreed with this, whatever their political persuasion. What has changed is the evidence. This example clearly shows a good number of academics responding to empirical results that conflict with standard theory.

Furthermore some economists have done what good scientists should do and produced new theories which can explain the empirical results that the minimum wage does not reduce employment. In that sense economists have been behaving as a science should. But because there are some contrary studies, that allows two things that distinguish economics from physical sciences. The first thing is a temptation to hold on to basic theory even though the balance of evidence is against it, something that is not totally absent in the physical science either (Kuhn, Lakatos etc). The second is to allow ideological influences to help decide what should be a scientific judgement. These are the senses in which economics is an inexact science.

For those interested in economic methodology, and excellent place to start is here, the title of which I am abusing in this post. However it is also worth reading this for sources on the new 'empirical turn' in economics. On the impact of ideology on economics a great place to start is this thread from Beatrice Cherrier. On the introduction and history of the minimum wage in the UK, including initial political resistance to it, see here.