The EU Referendum is a strong sign that the so-called ‘culture wars’ of the US have arrived in Great Britain in earnest.

The big event for me personally this week is not Theresa May finally giving up or explicit Remain parties easily beating explicit No Deal parties in the European election. It was the belated launch of my book to nearly 500 people at Kings College London in an event superbly organised by the Progressive Economic Forum. But don’t worry. This article is not going to be an account of that meeting or a summary of my book, but an attempt to give a fuller answer to a question from that meeting.

The questioner had just witnessed at first hand the passion of a Brexit party meeting, also well described by John Harris, Sky’s Lewis Goodall, Owen Jones and other journalists. She asked what can be done to diffuse that anger? Thinking about the answer I gave afterwards helped me understand more clearly the overall strategy implicit in much of what I write. This does not focus on the people who attended first UKIP and now Brexit party meetings, but instead the less committed voter who voted for Brexit, the classic marginal voter if you like. Let me give you an example of something that is discussed in the book but using a new chart, from the Berkman Klein Center. 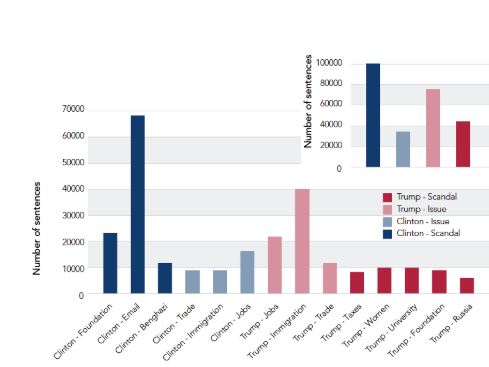 It shows the number of sentences in the US mass market media on different issues (source) during the 2016 election period. This is not just Fox News, but also reflects an odd obsession by publications like the New York Times or Washington Post about Clinton’s emails. (Some of the current administration also use their private email to conduct official business and it is hardly mentioned.)

A recent video in Vox by Carlos Maza explains brilliantly one reason why this happens. What Fox News does time and time again is create a story out of very little and obsess about it. The non-partisan media feel obliged to cover it to disabuse the right wing image of a liberal media. You can see exactly the same thing happen in the UK where the right wing partisan press often sets the agenda for our broadcasters. You can see it after the European elections, where the broadcasters focused on seat totals for the party that hopes seats will not be taken up rather than the 40% or more who voted for explicit Remain parties compared to less than 35% who voted for explict No Deal parties.

Trying to stop the non-partisan mainstream media from doing this might influence the marginal voter (as I note in my book, more voters trusted Trump rather than Clinton before the election), but it will not influence those who attend Trump or Brexit party rallies, who consume Fox news or believe the right wing UK press. You might persuade the non-partisan broadcast media that their practices lead to bias and should stop, but doing something about the partisan media and the economic and social issues that are their lifeblood requires political change.

You will only get that political change by changing the mind of the marginal voter, because it is much more difficult to change the mind of a Trump or Brexit party supporter by rational argument, or by trying to expose who Trump and Farage really are. Trump once boasted he could shoot someone in 5th Avenue and not lose his core support, and that is not far from the truth. Showing Farage’s background and income and associations will likewise do little to influence his core following.

This is why so many who voted for Brexit are prepared to Leave with No Deal. As Kirby Swales writes in a joint NatCen and UK in a Changing Europe report:

“The EU Referendum was highly divisive, highlighting a wide range of social, geographical and other differences in Great Britain. This was less a traditional left-right battle, and more about identity and values (liberalism vs authoritarianism). It is a strong sign that the so-called ‘culture wars’ of the US have arrived in Great Britain in earnest.”


The underlying causes that are the fuel behind Trump and Farage are not exclusively non-economic, but deindustrialisation due to globalisation is a small part of the economic story. I have talked elsewhere about the growing divergence between the towns and the large cities since the 1980s. In the US you have the same thing, but it is talked about as a rural urban divide. This is the result of a new source of economic dynamism in service and IT dominated industries that is actually assisted by the diversity that those in the towns and countryside find threatening.

To bring more of that wealth out of the cities requires abandoning neoliberal platitudes, and so requires radical political change. But a large part of the fuel behind the Leave vote and Farage and also Trump is not economic, but instead reflects a clash of values and culture. It has been noted many times that many Leave voters have a deep nostalgia for an imagined past, and this is coupled with a desire to bring back hanging, corporal punishment and reverse other aspects of what we call a liberal society.

Anti-liberal views may have deep psychological roots, roots that may also be linked to being attracted to authoritarian figures, which in turn goes with irritation with a pluralist democracy. If these people are calling the shots, a pluralist democracy is fragile. Here the partisan press can be important at legitimising these authoritarian and anti-liberal views, as is appeasement by centre and left politicians, but it would be a fantasy to believe they would go away in their absence.

The extent of social change in the UK and elsewhere over the last 60 or more years is perhaps unprecedented. Here the left and liberal ‘elite’, as their enemies refer to them, have been outstandingly successful. But as James Curran argues, liberals and the left in the UK have hit strong headwinds on the question of race, with he suggests a stubborn 25% of the population expressing racist views.

I like to stress the importance of beliefs about whether immigration causes lower real wages and puts more pressure on public services (probably not and the opposite is true, respectively), but once again this is something that influences the marginal or changeable view on immigration. There will always be a core where hostility stems from racist attitudes. Again a two stage approach makes sense. You focus on changeable views by providing facts and an alternative narrative, so you can elect a left liberal government. Only then can racist views be stigmatised and income and spatial inequality reduced to help the ‘left behind’. We can also, as Maya Goodfellow pointed out at my book lauch, start telling a more accurate history that goes beyond WWII.

An interesting question is how much we should worry about those still spooked by the rapid pace of social change. We know that this is concentrated among those over 60, but is this a cohort effect of those brought up in the repressive 50s who were untouched by the 60s revolution happening in the cities, or is it some inevitable consequence of age? If it is the former, perhaps the best policy is containment until the problem goes away.

The upshot is that I don’t think liberals or the left, who are in opposition in the UK or US, need to worry too much about convincing those who go to Trump or Farage rallies. What we do need to worry about right now is that those same people have been given power with the help of appeasement and an unbalanced media. As we watch the sickening spectacle of Brexiters choosing our next Prime Minister what we want above all else is to take power away from these people. Changing minds, if it is possible, can come later.
Posted by Mainly Macro at 02:15