I have decided to abstain from twitter conversations to protect my own wellbeing, but I made an exception for Andrew Sentance recently. The issue was the extent to which the 1981 fiscal tightening was equivalent to 2010 austerity. It was clear this needs a post to clarify things. In the charts below, I compare how various fiscal magnitudes compared to the year before financial year 1981/2 (blue) and financial year 2010/11 (red) in terms of percentages of GDP. (To be precise, the blue line subtracts X in 1980/1 from all subsequent years, where X is the share of some fiscal magnitude in GDP, and the red line subtracts X in 2009/10 from all subsequent years. Source OBR public finances databank) 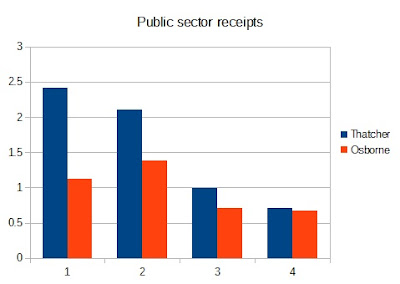 The 1981 budget was a tax hike, that prompted the famous letter from 364 economists denouncing the budget. However notice that the tax hike was mostly reversed within two years. In contrast the tax hike in 2010 (higher VAT) was smaller as a percentage of GDP but it was not reversed.

With total spending we get a different picture 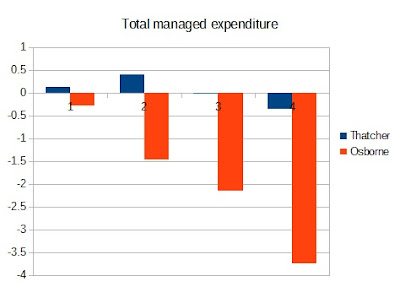 Under Thatcher the share of total spending in GDP stayed pretty constant. That does not mean there was no tightening, because with a large increase in unemployment we might have expected a rise in spending as a share of GDP (a point Andrew makes). But nevertheless the contrast with 2010 is stark. Public spending was the main component of fiscal tightening under Osborne.

It is worth looking at one component of spending: public investment. 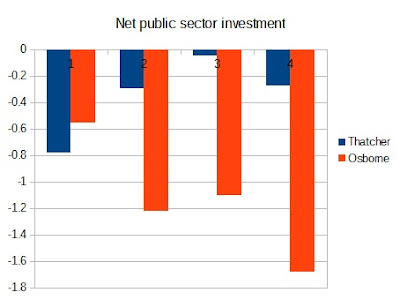 Here we can see some tightening under Thatcher, but once again it was quickly reversed. Under Osborne the cuts grew over time, and by the end were twice as big as anything attempted under Thatcher.

These components can be combined by looking at net borrowing. 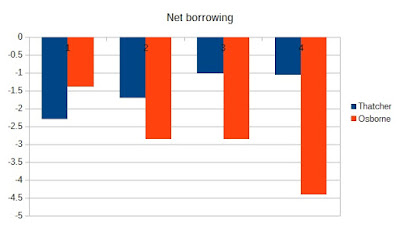 The Thatcher fiscal contraction was largely reversed within 2 or 3 years (almost completely reversed if we looked at cyclically adjusted figures). Osborne’s contraction grew steadily over time. It would also be a mistake to conclude that in the first two years Thatcher’s 1981 contraction was as equally severe as Osborne’s. Tax increases have a much lower impact on demand than cuts in public investment or government spending more generally.

So 2010 was not the first time a government had chosen to cut public spending in a recession, which is the reason I added the word ‘sharply’ in my tweet. It was also not the first time a UK government had attempted fiscal tightening in a recession, as 1981 shows, which is why I specifically talked about public spending in my original tweet. But perhaps the most important difference between 1981 and 2010 is longevity. Thatchers fiscal tightening in 1981 was largely reversed by1983: tightening did not just stop but it was followed by fiscal expansion. In 2010 tightening continued year after year. It is no surprise that the recovery was so weak.

Indeed, if you define an economic recovery as growth above past trends, which there is a strong case for doing, there was no recovery from 2010 onwards. Using the same definition there was a recovery after 1981, but it began in calendar year 1983. The temporary fiscal consolidation of the 1981 budget did delay the recovery for nearly two years, but partly because that consolidation was reversed the recovery eventually came. Of course monetary policy played an important role in both periods (the size of the interest rate cut was similar), but the cuts were slower under Thatcher and there was no Quantitative Easing either.

While 1981 was nothing like as bad as the austerity of 2010, it was a serious macroeconomic mistake which undoubtedly caused considerable hardship for many. It also played an important role in creating the conditions, in the mind of many Conservatives, for 2010. Conservative politicians and particularly the Institute of Economic Affairs told a false story, a story where the economists who wrote the 1981 letter were wrong and Thatcher was right. Because they kept on telling their story as if it was true some media commentators began to believe it was true. I’m sure this played some part in sustaining austerity in 2010.