Will we get No Deal because Brexiters want it more?


“The reason we might have a no-deal Brexit in Britain is because its advocates want it more than their enemies want to stop it. They are making it happen whilst their opponents spend their time only wishing it would stop.”


When I first read this in an article by Sky journalist Lewis Goodall I thought it was nonsense, and stopped reading. It obviously does not apply, for example, to EU citizens living in the UK or all those who march against No Deal. But then I watched this, a talk by Dominic Cummings on his referendum victory (HT @ericlonners), and I realised what Goodall was talking about.. I went back to the article, read it in full and mostly agreed with it.

The trigger was a point that Cummings makes in his talk about most of the media covering politics. They are essentially interested in the government, parliament and its MPs, and so everything they say has to be taken in this context. It is a point I have made myself before, but it is easy to forget. Goodall is not talking about those who march for Remain, or the trivial numbers that march for Leave, but instead he is talking about MPs in parliament. And I think on this he is right.

Take the discussion of a possible coalition of national unity that MPs could vote for if the only way of stopping Johnson allowing No Deal is to vote him out. The job of the coalition would be to get an extension of Article 50 and then call a General Election. The idea is that rebel Tory MPs could only do this if Corbyn does not lead that coalition, because Corbyn “has become toxic”. So avoiding No Deal is less important than allowing a Corbyn government, even if that government would last no more than a month! That supports Goodall’s thesis.

The LibDems seem to be saying the same thing. They would not vote for a Corbyn led coalition government even, it seems, if the alternative was No Deal. Again avoiding No Deal is less important than allowing a very temporary Corbyn government. That supports Goodall’s thesis too, and it comes from the so called ‘party of Remain’.

Finally the Labour leadership has ruled out any kind of coalition of national unity if it was not led by Corbyn. I can see why - it is hard to admit so publicly that your leader is toxic to other Mps just before a General Election - but nevertheless it means they are also putting party before preventing No Deal. Goodall is right again.

But what does all this actually mean? Simply that all these MPs or party leaders are prepared to put party interests ahead of national interests. We can but hope that at least some of this is posturing ahead of negotiations, but such posturing can in itself be harmful to the cause of preventing No Deal.

Of course the corollary is not that Brexiters are putting country ahead of party. A No Deal Brexit is only something that a fanatic would do. A better formulation of Goodall’s idea is that No Deal will happen because No Dealers are fanatics and opponents of No Deal are putting party before country.

What about the nonsense that No Deal is required to respect democracy in the form of the 2016 vote? This is preposterous because 2016 cannot be a mandate for a No Deal Brexit when No Deal was ruled out by the Leave campaign. Bexiters implicitly acknowledge this is true by pretending that they had talked about No Deal in that referendum. But if you want to see what kind of mandate 2016 does represent, it is well worth watching the talk by Cummings noted above.

As well as showing an acute understanding of how the UK broadcast media works, his comments on what won the referendum for Leave are interesting. He notes that before the referendum most people knew little about the EU, and in addition were not particularly exercised by it as an issue. (Polling confirms this.) So, quite simply, to win the referendum the Leave campaign had to associate the EU in a negative way with things people were exercised about. Cummings talks about keeping the original Brexiters, who did want to talk about the EU, well away from the campaign.

Cummings notes three things people did care about. The first and most obvious was immigration. He says this issue had become 'associated with the EU', and there were two reasons for this in my view. The first was the Conservative targets for total net immigration which had not been met, together with the rhetoric that blamed reduced access to public services on immigrants rather than austerity. The second was the idea put forward by the pro-Brexit press that these targets had not been met because of Freedom of Movement. In this respect the following ONS chart is revealing: 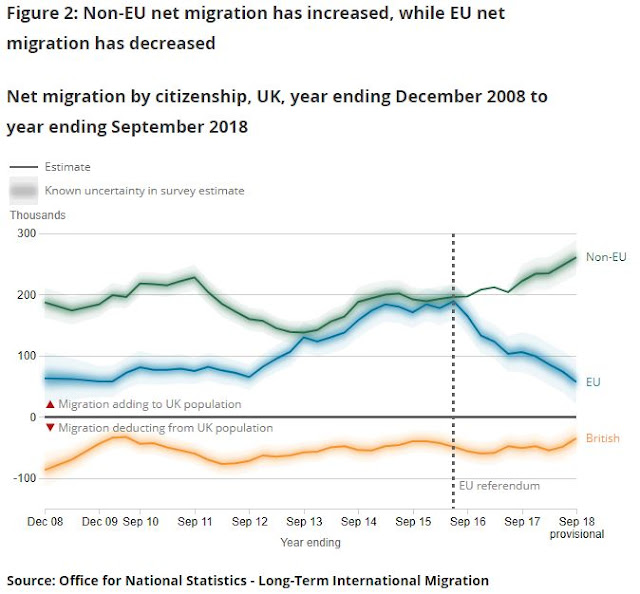 The second factor Leave had going for it, according to Cummings, was the outcome of the Global Financial Crisis, and I would add austerity. The reason is obvious, but again little to do with the EU. The third was the problems with the Eurozone, but again the Eurozone’s problems all stemmed from a single currency, and not the trade and other arrangements of the EU. Therefore what all three have in common is that they have little to do with the EU.

Which brings us back to whether the people saying they want No Deal care more about it than those who want to stop No Deal. Cummings’ analysis suggests that they don’t, because by his own admission they were voting for issues that had little to do with the EU. They evidently don’t because we have not seen hundreds of thousands march on Westminster in support of any kind of Brexit. The best they could manage were ‘thousands’ when the March deadline was missed. We have seen six million sign a petition to revoke Article 50, but a tenth of that number signing a petition for No Deal.

The fact that Remainers want to stay in the EU more than No Dealers want us to crash out should come as no surprise. Leaving the EU takes away basic rights from EU citizens in the UK and UK citizens in the EU, and confers no new rights in return It takes away the right of young people to work visa free in the EU. It takes away many people’s European identity. Crashing out will make almost everyone poorer and few better off. It will cost lives. All for the notion that we will become ‘independent’, when few Leavers can name a law imposed on them by the EU that they disagree with, and even fewer an EU law that the UK voted against. Brexit is one part of the population imposing considerable costs on the rest, for reasons that have little to do with the EU.