The reality behind fiscal scare stories, or mediamacro is alive and well

If you listen to the broadcast media, you will have almost certainly picked up the message that at some point in the near future the Chancellor is going to have to raise taxes or cut spending to ‘pay for’ all the support to the economy during the pandemic. At least the Financial Times has learnt the lesson of 2010, and notes in this editorial that the Chancellor

“must hold the line and resist attempts to push the UK into a premature fiscal retrenchment. Cutting spending in the middle of the worst recession since the creation of the country would be a historic blunder and make Britain poorer in the long run through unnecessary unemployment and business failure.”

But they add “Eventually the bill for the crisis-fighting measures will come due.” This is also the message of the latest report from the OBR. We can see what they have in mind from this chart. 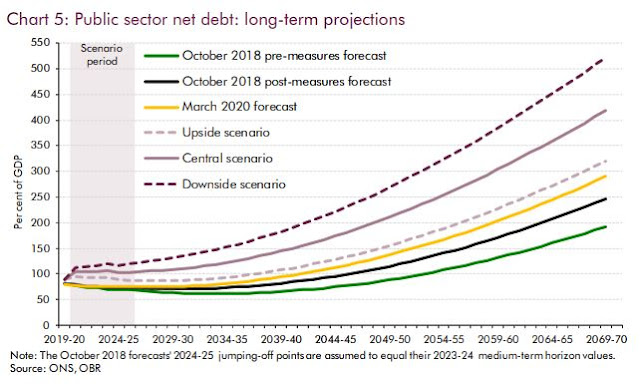 All the scenarios, including previous pre-pandemic forecasts, show the same underlying instability. The difference is that as a result of the pandemic, this instability kicks in around the end of this decade rather than sometime in the next decade. Here we get to the crucial point I want to make. For the next five years, in its central forecast public debt moves either side of its projected level for 2020/1 of 104% of GDP. (For each year thereafter: 104, 105, 106, 102.)

The implication is that there is no immediate need for large scale fiscal tightening when the economy recovers. The deficit will be higher than we are used to, but with a higher level of public debt and very low interest rates the level of the deficit that stabilises this debt is also higher. Thus there is no immediate need for substantial tax increases or spending cuts immediately after the recovery is complete. According to the OBR something will need to be done after the general election, but I doubt any Conservative Chancellor will raise taxes substantially ahead of a general election based on OBR forecasts alone.

So the big news from the OBR’s report is not only that there is no immediate need for fiscal consolidation, but if the economy recovers according to its central scenario and it has got its fiscal numbers right, there is no need for substantial fiscal consolidation once the recovery is over. A permanent hit to UK output, which in other circumstances would lead to an unsustainable deficit, has been offset by the impact of low borrowing costs and a higher level of debt. Of course the OBR may turn out to have been too optimistic, and their pessimistic scenario does show debt rising through debt rising a bit between 2020/1 and 2024/5.

So why all the talk of fiscal gloom? (Not quite all. Ben Chu at the Independent has made the points I make above.) Are they reflecting what the OBR says? The report is called the “Fiscal Sustainability Report”, so you would expect them to flag the long term instability. But the final paragraph in their summary ends with this:

“in almost any conceivable world there would be a need at some point to raise tax revenues and/or reduce spending (as a share of national income) to put the public finances on a sustainable path.”


It seems that too many ignored the crucial three words “at some point”.

All this illustrates how deep seated the “deficit up = taxes will rise or spending will be cut” meme is. Of all the important economic stories that arise from this stage in the pandemic, the consequences for the deficit and future consolidation is not one of them. I guess one reason these stories are popular is that they are potentially relevant to everyone. Another is that they are so easy to write. Let us just hope that this time around politicians on all sides are not taking them seriously.

Posting may not happen for two or three weeks, because we are finally moving house..