The two sides of austerity.

I thought I’d use the FT’s mea culpa on austerity to make a point which is easily missed in public debate. Sustained austerity of the kind inflicted on the UK from 2010 until quite recently was terrible for two types of reason. The first, that most people focus on, are the cuts to government spending (shrinking the state) that went well beyond trimming any fat and caused real hardship. The second is macroeconomic. Cutting government spending in a recession is never a good idea, and when interest rates were stuck at zero it was a disaster.

To highlight that distinction, I’m going to claim (with a few provisos) that the current Chancellor in this recession has so far not made the second, macroeconomic mistake. In that sense we have not seen a second wave of austerity. However with very limited exceptions he has continued to maintain the cuts in government spending that were made during the earlier austerity period. In that sense austerity has never gone away.

Austerity in terms of shrinking the state has not gone away

There is so much misleading analysis based on public spending aggregates around. Here are figures for the main components of current public spending over the austerity period. They are as a percentage of GDP, as they always should be for this kind of analysis but hardly ever are (Source IFS). 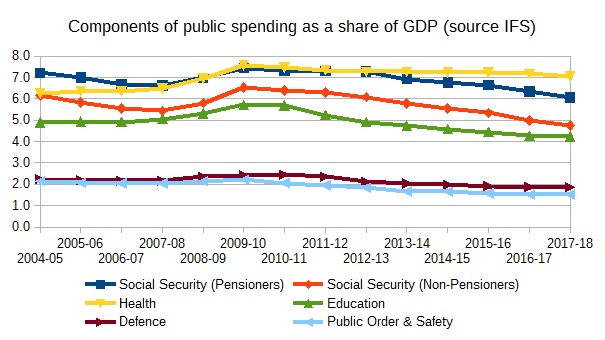 You can see that all these components of public spending have fallen substantially as a share of GDP over the austerity period from 2010. I have started the chart from financial year 2004/5, because spending in 2009/10 may be unusually high because of the recession. As it is difficult to read from the chart, here is the percentage of spending as a share of GDP in 2017/8 compared to 2004/5 for each component (figures for 2017/8 compared to 2009/10 in brackets): Pensioners social security 87% (82%), other social security 82% (73%), Health 111% (93%), Education 86% (74%), Defence 85% (77%), Law and Order 74% (69%). The extent of the squeeze on public spending over the austerity period is crystal clear. As the per capita numbers from this chart from a different IFS source makes clear, recent increases in public spending hardly dent this picture. 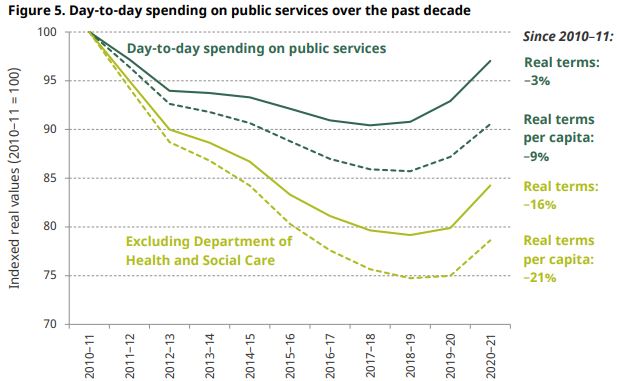 The one apparent exception to the tale of devastating cuts in public spending is health. Yet the idea that the government proposed and the media accepted that health had been protected is an illusion, because historically health spending as a share of GDP has tended to increase, as this chart shows (source). 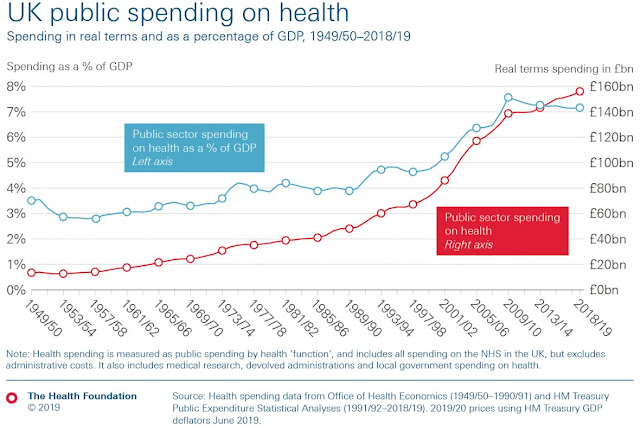 Health spending in the 1950s was around 3% of GDP, in the 1990s just under 5%, and in 2005/6 around 6.5%. The reasons are many. As we grow wealthier we like to spend more of our income on health, a gradually ageing population, innovations in what medicine can do and so on. That implies that keeping the share constant is actually a squeeze. That is why the health service was near collapse before the COVID crisis, which forced the government to relax the squeeze to some extent. The fact that health spending needs a growing share of total national spending has profound implications for taxes that I’ll come back to later.

All these numbers square with experience on the ground. Delays in the administration of justice are getting worse and worse, and it is not just because of COVID. The squeeze on welfare has helped lead to the widespread use of foodbanks: 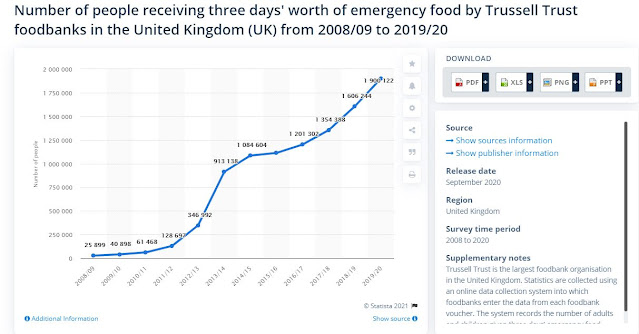 If you want to know why foodbank use has gone up so much, it’s a combination of a cruel and arbitrary punishment regime for claimants and a dramatic fall in the relative incomes of the poorest households, part of which is a consequence of austerity. (Chart from The Resolution Foundation.) 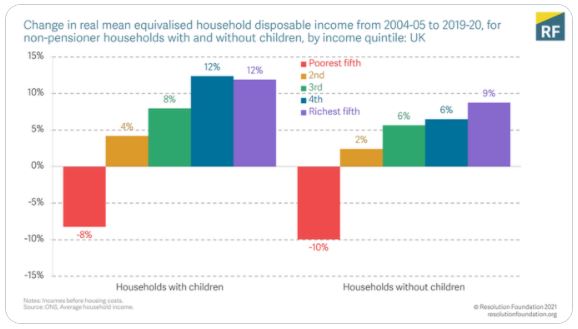 We now have ample evidence that the attempt to squeeze the state since 2010 has caused widespread hardship and dislocation. The belief among many on the right was that there was substantial inefficiency within the public sector and starving resources would increase productivity. It might have done that, but it has clearly gone too far in many areas. This is one half of the fundamental problem for those who want to squeeze the state in order to reduce the tax burden (as Osborne did). The other is health spending.

As I noted earlier, the share of health spending in GDP has been steadily rising. That in turn reflects greater demand for health services. With a health service that is largely free to those who use it, that means a rising level of taxation to pay for it unless you can cut elsewhere. For decades you could cut elsewhere, because the end of empire and then the peace dividend allowed large cuts in defence spending. That option seems to be no longer available, which means taxes in some form have to rise to pay for the NHS. The Conservative party is still in denial about this. As the media and therefore parts of the public are also in denial, that forces Labour to match Tory promises not to raise certain taxes in order to win elections.

Austerity in terms of macroeconomics has largely gone away

In 2010 the idea that it was a good to cut government spending in the middle of a deep recession where interest rates were stuck at their lower bound went against macroeconomic theory (undergraduate and state of the art) and evidence, and as a result most academic macroeconomists did not support austerity. However macroeconomic institutions like the IMF and OECD did for a time, and this, along with governments in the UK, US and Eurozone, is the consensus that the Financial Times refers to in their mea culpa.

Why governments and international organisations supported austerity is a complex question that I have spent many posts analysing. Without doubt, a desire to reduce the size of the state was part of the story. The important point, which is not completely clear from the FT piece, is that most academic opinion thought it wrong at the time, so in that sense the facts have not changed. All the evidence in 2010 said austerity would reduce output, and it did.

The short term cost of austerity was a delayed and weaker recovery. That is standard macro, as I was at pains to point out when the FT declared in 2013 that Osborne had won the battle over austerity. My own estimates put the cost of that delayed and weaker recovery at around £10,000 in lost resources per average household. That is bad enough, particularly for those who became unemployed, but it may not be the worst macroeconomic outcome of austerity.

The productivity puzzle, about why UK productivity growth was so weak after 2010 compared to other countries, has many potential explanations, but I suspect one important part of the puzzle is austerity. Again I’ve tried to explain why in economic terms before, but we can make the point very simply as follows. The experience of firms since WWII has been that almost without exception governments support recoveries from recessions. They cannot stop recessions happening, but they can ensure through monetary and fiscal policy that they are short lived. 2010 broke that understanding, which is bound to have had a significant negative impact on firm’s willingness to invest and innovate. In other words austerity may have permanent effect in reducing GDP and real wages.

As the FT notes, both the OECD and IMF now recognise that in a recession where interest rates are at their lower bound you need fiscal stimulus. Does this government? No, in the sense that it has never recognised its mistake in 2010. Yes, in the sense of how it has dealt with the pandemic. If you applied George Osborne’s logic to the pandemic, the priority should be to cut spending to reduce the deficit caused by fear of the virus and lockdowns. There would be no support for those furloughed. Policy would be like the US but with austerity rather than fiscal stimulus.

That Sunak has done the right thing, and not followed Osborne’s example, suggests he also recognises the folly of austerity. Indeed, his ill-fated (because far too early) Eat Out to Help Out scheme suggests he’s also prepared to actively help any recovery. Osborne’s measures in contrast hindered any recovery.

However we have to add a large number of caveats. The first is that his support has not been complete, and he has done little to cover gaps. His refusal to increase sick pay is both mystifying and dangerous. His successful attempt to delay a national lockdown to deal with a second wave was criminal, and that has had a terrible impact on the economy as well as health. He was too late to recognise that the second wave would need a furlough scheme like the first, and many lost their jobs as a result. I describe these as caveats because they could be motivated by attempting to gain favour among the ‘reckless right’ group of Tory MPs who don’t believe in lockdowns. However they could also be motivated by a worry about the public finances, which qualifies the extent to which he has thrown off austerity at a macroeconomic level.

To add to this is a forward looking caveat, clearly set out in Dodds recent impressive Mais lecture. There is a danger that Sunak will want to cut taxes just before the next election (if it is 2024), and to achieve that he may embark on fiscal consolidation before an economic recovery from the pandemic is complete. His public sector wage freeze may be part of that. This suggests that Sunak, like Osborne, is tempted to make macro policy fit the political cycle rather than fit the needs of the economy. We don’t know if he will do this, but that is something to look out for.

What is clear is that Sunak believes that he should follow a responsible fiscal policy once the recovery is over. The key here is not the word responsible, but how he defines it and how that is achieved. The danger is that he may, through his own wishes or those of his backbenchers, focus on spending cuts as well as tax increases. That is why the Universal Credit issue is a problem for him, but it is also a much more serious problem for those in poverty. Reversing the recent increase in Universal Credit, even if there is a one-off payment or some short delay, would substantially increase the unacceptable and growing level of child poverty in the UK, as the Resolution Foundation has shown (figure 20).