Who caused our current COVID crisis: an example of public deception by the media and government

Let me start with what the public thinks: 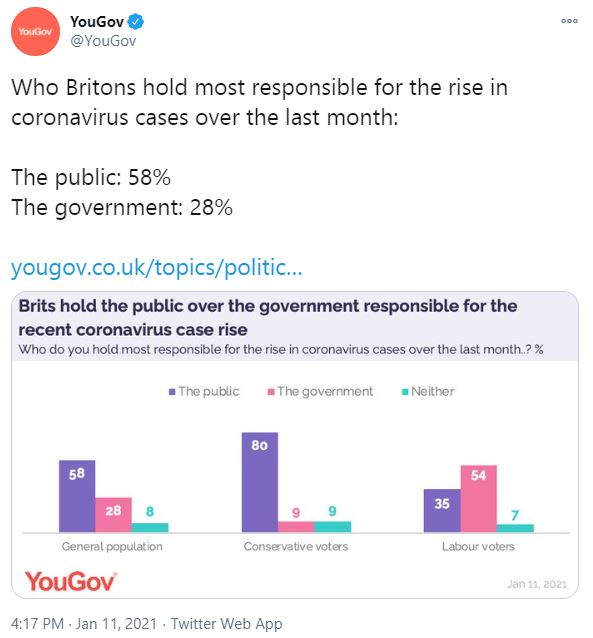 It is a straightforward question and the majority of the public give a clear answer. Unfortunately that majority are wrong. There is no doubt that the rise in COVID cases over the last month is a result of government failure. Let me set out what the government’s mistakes were.

When a government ignores its own expert advice, bad outcomes that result are their responsibility alone. The rise in COVID cases over the last month is the result of pointless government inaction, and not the fault of the public.

So why do only a proportion of Labour voters, and virtually no Tory voters, understand this? The obvious point that is always worth repeating is that most voters don’t follow events and their causes that much, and so gain information largely from the newspaper they read or the main news bulletins they watch. They probably will not know what SAGE advised.

With that level of engagement, most people did not see or read much criticism of the government’s actions, and that they do see can be dismissed as normal political banter. However they do see plenty of discussion of whether the public are obeying the rules, and may observe individual instances of rule breaking themselves. The government and its press encourages this line of discussion. As a result, the majority of the public recall that discussion, rather than the role of the government, when asked which was more important.


How important is this? In a recent Observer poll 45% disapproved of Johnson’s handling of the pandemic, compared to 35% who approved. If you ask more specific questions about how the pandemic was handled, 72% said that the government had not acted fast enough, while 25% wanted a government that tried its hardest not to enter lockdowns (which is a pretty good summary of the government’s recent behaviour). So the government has hardly won many votes as a result of its failures in dealing with the pandemic.

However that is setting the bar too low. The reluctance of this government to deal in particular with the second wave is no ordinary government failure. It has cost tens of thousands of lives. Although most other European countries have not handled the pandemic well, that does not mean the politicians that allowed that should get a free pass! In addition, the UK has allowed more to die (COVID deaths per million) than most other western European countries: higher than France, Germany, Netherlands, and the Scandinavian countries. Current deaths per million are higher than any other western European country.

The scale of the disaster that the government has encouraged is incredible. We are near 100,000 excess deaths, which is at WWII levels. As I pointed out two weeks ago, unlike austerity this government enabled disaster has hit most the demographic where the majority voted Conservative in the last election. The last six months should have been a Suez moment for Johnson, showing his strategy for keeping his citizens safe to be the disaster it is.

Now just imagine if a Labour government had been in power over the last year and made the mistakes this government has made. (This is an unrealistic thought experiment, because any Labour government would have followed the science.) The newspaper front pages (including those that support the centre or left) would be all about the mistakes the government had made. We wouldn’t see many stories about people not obeying the rules, but instead stories about ‘loony left’ MPs who believe lockdowns don’t work. The issue of the day would be when the Prime Minister resigns, and there would be calls for an immediate election. Given the scale of the disaster we have seen, all that criticism would be entirely justified.

This thought experiment reveals the extent to which the media are hiding the enormity of the government’s failure. This deception is what happens when the right controls most of the press and has tamed the biggest broadcaster through intimidation and key appointments. With perhaps an end to the pandemic in sight, but when deaths are still high, it is time for Starmer and the entire opposition to this government to start being explicit about the harm the government has done.

They need to talk about how the government is responsible for tens of thousands of unnecessary deaths. The government had a duty to care for the elderly and vulnerable and they have failed in the worst way possible. As Ian Dunt writes, "This is, without hyperbole, the most severe and unforgivable example of government failure we have seen in our lifetime."

The opposition needs to make it clear that the ‘saving the economy’ excuse is short sighted and deadly, for both lives and the economy. The opposition needs to highlight the many Tory MPs, the reckless right, that have been telling Johnson to do even less than he has done.  While there was a case to tread carefully at first, now is the time to take the gloves off so that voters understand who was to blame at the next general election.