Why are the Conservatives so bad at running the economy?

Despite their reputation, over the last forty odd years Conservative Chancellors have been very bad at running the economy. Given the general view which suggests the opposite (twice as many think the Tories are better at managing the economy than Labour) , it is worth setting out the record, but also to ask why they have been so bad. I’m going to start in 1979, with the Thatcher government, because Thatcher represented a new type of Conservatism. Before 1979 the Conservative party was more paternalistic, less neoliberal, and generally accepted the largely Keynesian methods for running the economy. (That is a huge oversimplification of course, but we have to start somewhere.) 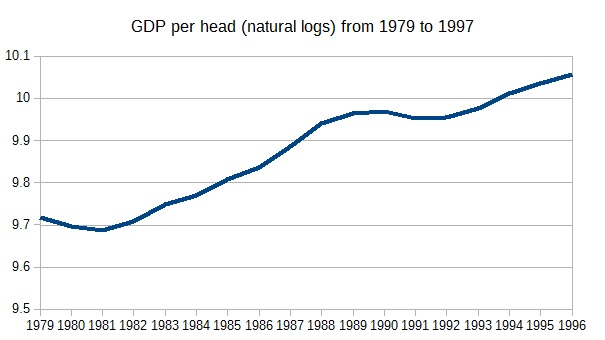 Above is the path of GDP per head over the period of Conservative government that started in 1979. As you can see it contains two recessions, in the early 1980s and early 1990s. Both were associated with big macroeconomic policy mistakes. The first was monetarism. Monetarism did succeed in getting inflation down quickly, but other than that it was chaos. Monetary targets were never hit and interest rates were forced up to levels that decimated the UK manufacturing sector, leading to rapid deindustrialisation and persistently high unemployment for most of the remaining decade.

Essentially the government lost control of the economy, and as a result quickly abandoned monetarism. The period is also interesting because in 1981 we had the first brief experiment in austerity. Famously 364 economists wrote to the Times to complain. But austerity was very quickly abandoned (it started being unwound a year later) and as a result GDP recovered to previous trend levels with a brief delay caused by 1981 austerity.

By the late 1980s the economy was booming (see chart above). Monetary policy was shadowing the DM, so it was up to fiscal policy to curb what was turning into an inflationary boom. But the Chancellor Nigel Lawson wanted to cut higher rate tax (from 60% to 40%), and he felt it was not politically possible to do that without also cutting the basic rate. So we had a cut in personal taxes in a boom, and inflation took off (rising to over 9%).

At this point the UK decided to join the European ERM, at an exchange rate that was overvalued. I was leading the macro team at the National Institute at the time, and we did extensive analysis suggesting that attempts to stay in the ERM at that overvalued rate by raising interest rates would create a recession and was doomed to fail. We got the recession in 1991 and 1992, and we were forced out of the ERM on black Wednesday in 1992. The devaluation that followed did produce a strong recovery. 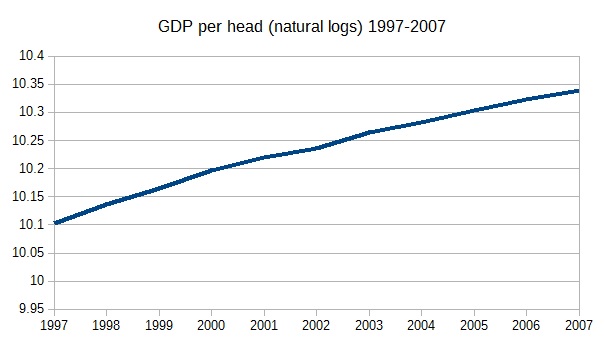 Moving on to the Labour government, the chart above ends in 2007 for reasons I will discuss. The first and most important thing to note is that the path of GDP per head is much smoother than in the previous charts. (The trend is unchanged compared to the previous chart.) The main reason for this was that Labour followed mainstream academic advice in giving the task of macroeconomic stabilisation to an independent Monetary Policy Committee, made up of Bank of England staff and outside appointees.

The Labour Chancellor did, however, have a big decision to make, and that was whether to join the Euro. After completing an extensive analysis involving Treasury staff and outsiders (Disclaimer - I was one of the outsiders) Gordon Brown made the right choice, and persuaded Tony Blair not to join.

Am I cheating by not including the Global Financial Crisis (GFC)? The reason I don’t is in the name. This was a crisis that started in the US housing market and spread all over the world, with the UK being hit by more than most because of its large banking sector. Now if the Conservative opposition had argued since 1997 for greater financial regulation, then you could say with some credibility that this crisis was in part due to the comparative inability of a Labour government to run the economy, but of course the Conservatives were arguing for more deregulation over this period. The truth is that the GFC came as a surprise to most people, including the Bank of England who were very late to see how serious it would be.

The GFC was the background to the final period of Conservative government, from 2010 until today. Growth in UK GDP per head did not recover from the GFC (there was no return to previous trends unlike earlier recessions) and trend growth was cut in half. Osborne’s austerity is not the only reason for that, but it probably paid a part. As a policy it turned basic macroeconomics principles on their head. The consensus today (and what the majority of academic macroeconomists said at the time) is that if interest rates are stuck at their lower bound you should use fiscal policy to stimulate the economy, not the reverse.

Austerity continued until slightly beyond the next macroeconomic disaster, Brexit. The origin of this crisis was Cameron’s decision to hold a referendum because of internal political problems in the party and UKIP. The OBR calculate (p34) that Brexit will reduce UK productivity by 4%.There was a brief but selective reversal of austerity in 2019.

Which brings us to Coronavirus. In the autumn of last year the Chancellor persuaded the Prime Minister not to follow expert advice that some form of lockdown was needed to check rising case numbers, and the result was a devastating winter of tens of thousands of unnecessary deaths and a further large hit to GDP. Unfortunately just one more example of how Conservative Chancellors tend to damage the economy.

This brings us up to date. We have just had a budget which is essentially austerity mark 2: less severe, backloaded and more tax than spending, but still a budget at the start of a recovery period that focuses on fiscal contraction rather than stimulus. There may come a time for tax rises, but not until the output gap is closed and forecast inflation together with interest rates are above 2%. The Chancellor had an excellent opportunity to raise public spending in a number of areas, but instead it was cut.

Why do Conservative Chancellors keep making mistakes? I think it’s a combination of three things. The first is a lack of respect for academic economists and their received wisdom. The second is the search for popularity and election success. The third is ideology. Let’s go through this short history looking at all three.

Thatcher chose the ideas of right wing economists over most academics in adopting monetarism. Lawson wanted to cut higher rate taxes, but to preserve popularity he also cut all taxes in an inflationary period. Austerity combined all three elements: the majority of academics were ignored because Osborne wanted to shrink the state under a pretext that was popular. Brexit ignores consensus trade economics, producing the only trade agreement that makes trade harder to do, but it also played well to the electorate that the Conservatives needed to win over. I can only ascribe the mistakes over an Autumn lockdown to an ideology most clearly seen in the right wing press. This last budget ignores the academic consensus for stimulus because Sunak wants to retain the media image that equates responsibility with fiscal consolidation.

In contrast Labour achieved macroeconomic stability by adopting mainstream academic advice on the wisdom of independent central banks, but added a degree of political control on what targets should be. Labour looked at academic wisdom when choosing not to adopt the Euro.

Am I really suggesting that one of the failings of Conservatives is ignoring academic economists? Don’t we know that economists can never agree and are often wrong? Part of that reputation comes from economic forecasts, which academic economists and forecasters know is only slightly better than guesswork, but the media pretends otherwise. But on policy in the UK, the majority of academic economists were right in 1981, right that independent central banks would stabilise the business cycle, right that austerity was a terrible idea, right that Brexit would reduce output, and right that there was no economy/health trade-off beyond a few weeks during the pandemic. Academic economists make mistakes on policy of course, but as the ERM episode shows it is always best to use academic knowledge in making decisions.

One half of the reason why the public perception of economic management abilities is the opposite of reality is that Labour is blamed for a global crisis. But the other half is that too often Conservatives, through their think tanks and compliant media, get to write the history. The common perception is that the 364 economists turned out to be wrong, while in reality they were right. The media told everyone from 2010 that the economy was like a household and needed to balance the books, which could just be an innocent misunderstanding but could also be because the Conservative government controls the media narrative.

We can see this very clearly in some 2013 YouGov polling. Labour are preferred on living standards, jobs and inflation, while the Conservatives are preferred on controlling the deficit and helping people get on the housing ladder. Yet the media's emphasis on deficit control meant that the Conservatives are clearly preferred on the economy. Only when the media start to see a Chancellor's job in controlling the economy with better living standards, jobs and inflation rather than deficits will perceptions about who can manage the economy start corresponding with the historical record.