A government out of control

The commitment that the UK government gives 0.7% of its GDP as overseas aid is enshrined in law. Johnson’s government decided to cut this to 0.5%, but didn’t need to put this to parliament because the cut was supposed to be temporary. A large number of Conservative MPs were unhappy with this, and wanted to use parliament to reverse this cut. The parliament’s speaker ruled their attempt invalid, but requested the government to allow a vote on the issue. The government refused. The executive increasingly views parliament with contempt.

So much for the sovereignty of parliament. We knew this government thought little of parliamentary sovereignty when it closed it down, illegally, before the last election. The courts forced it to retract that measure, so now the government is intending to pass laws that would prevent the courts doing so again.

Of course it is open to MPs to pass a vote of no confidence in this government, just as it is possible for a majority of Tory MPs to bring down their leader. But that is never going to happen while Johnson looks like winning the next election. As a result, parliament has no effective control over what this government does.

The government, in the form of Michael Gove, has recently been found guilty of giving public money - our money - to friends in the form of a contract with no competition at all. That is breaking the law. This is corruption. He has no intention of resigning and Johnson will do nothing. In other words this government has been found to be corrupt, and no one can do anything about it.

Matt Hancock has recently been questioned by a select committee on his handling of the COVID pandemic that has killed around 130,000 people in the UK. One of the issues the committee raised was early shortages of PPE. He repeated that there has never been a national shortage of PPE. This statement could best be described as economical with the truth. He was asked about reports, from a whistleblower, that the department of health had pressured Public Health England to change its guidance on release of patients from hospitals to care homes to no longer include the need for a negative COVID test. He said he had no recollection of that - a clear non-denial denial. Mr. Hancock will remain in post.

The Education Secretary, Gavin Williamson, was quick to condemn 10 Oxford students who decided to take down a picture of the Queen from their common room. He knows what is important - it was going to be front page news in the Mail. What isn’t front page news in the Mail is that the new wave of the UK’s COVID pandemic, generated by the Delta (Indian) variant, is very strong among school children, and it is highly likely that these children are helping this variant to spread rapidly. Knowing all this, Gavin Williamson told schools they didn’t need to wear masks any more. Will Williamson resign or be sacked for helping this new wave spread rapidly? Silly question.

Then there was Priti Patel, Home Secretary, who was accused of bullying by, among others, her Permanent Secretary. Bullying is against the ministerial code, and an internal inquiry found her guilty. The Prime Minister refused to apply any sanction, and the only person to resign was the person in charge of upholding standards. The Permanent Secretary was sacked and received a large sum in settlement from the government after he took the case to an employment tribunal.

Then there was the Housing Secretary who unlawfully approved a housing scheme so that the developer could avoid paying £40 million odd to the council. Not even a rebuke from anyone in government. Corruption is particularly rife among building developers and this government. There is much more, but let me cut to the chase. Actions that would have led to pretty rapid resignation in past administrations have been ignored by this Prime Minister time and again.

It is not as if his predecessors in office have been shy of sacking ministers who transgressed in various ways, as this chart shows: 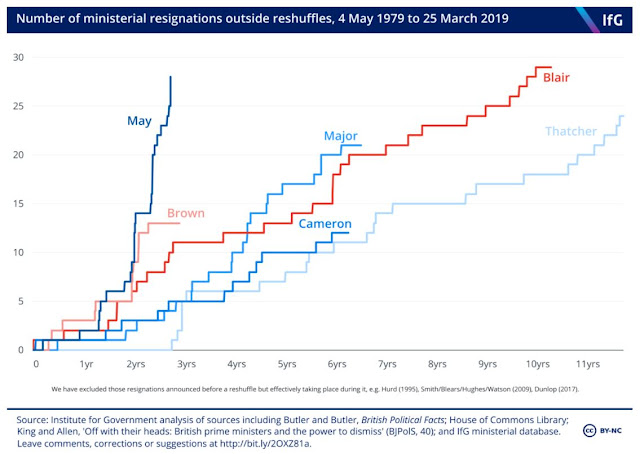 Why did Johnson keep Patel and the others? Why shouldn’t he? They are his people, and nothing bad is going to come from keeping the ministers he chose in the job. It is tempting to say that his own actions are too similar to these ministers (lying, breaking the ministerial code), but I don’t think that is the key here. The key is that this government is totally unaccountable, and does just what it likes.

It is unaccountable to parliament, because it has a large majority and Tory MPs are not prepared to bring the house down. It ignores the law when it can, and when the law does stop it doing something it then attempts to change the law so it won’t be stopped in the future. It gets away with this because it has effectively the one key check on its power - the media.

For a large part of the press, Johnson is their Prime Minister. They became propaganda outlets to persuade people to vote for Brexit, and they have remained propaganda outlets supporting the government ever since. It is tempting to say this has always been true, but the extent to which the right wing press has become the propaganda arm of the right in the Tory party has steadily increased over the last few decades. It is now fully signed up with the government’s culture war, which is why 10 students taking down a picture of the queen can become headline news. Talk of a free press in this context is laughable - these titles are now part of a Tory party run by one of their former journalists.

However the big change, begun by Thatcher and Cameron and completed by Johnson, is to tame the BBC. This is hardly surprising, when party donors are appointed to key positions and the government keeps attacking the BBC’s outputs, income and even its existence. The BBC does not push propaganda, but they do not take it on either, giving the press a largely open field for their propaganda to work. They avoid the truth if it embarrasses the government, and when its reporters do tell things straight, they are put down by the BBC’s leadership. (C4, Sky and sometimes ITV are better, but the BBC overwhelmingly dominates in terms of viewers.)

The only accountability that has any influence on this government is the electorate. But because of its natural advantage in the media, and unfortunately an opposition that seems pretty ineffective beyond PMQs, that influence on the government is partial and weak. Issues most voters will not notice, because their only sight of them is a news item towards the end of a bulletin (like the government breaking the law on contracts), can be safely ignored by the government.

Alas, because of the way the BBC fails in its reporting, even things that do have a large impact on voters, like tens of thousands of unnecessary deaths, will never be described in those terms. That lack of media accountability allows Johnson to ignore his scientists, and put personal ‘freedom’ above saving lives and the economy. This is what happens when the government becomes unaccountable. [1] It is allowed to make mistakes costing lives, and pays no price for these mistakes.

None of this is a surprise. What I didn’t know then was that Johnson would choose ‘freedom’ over lives and the economy not once, not twice, not three times but now four times. Johnson prioritised getting a trade deal with India over protecting the UK from a new highly infectious variant. When Johnson went to stage 3 of removing the latest lockdown he knew SAGE was warning of hospital admissions on the scale of the previous wave, and he carried on regardless with little media comeback. He can only carry on ignoring scientific advice because the only institutions that could hold him to account in the eyes of most voters choose not to do so. This is why, for the first time in living memory, we have a government out of control.