The COVID wave the government doesn’t want to talk about

[If you receive this blog by email, I hope you will be pleased to know that after many requests I have preserved that ability using follow.it after my blogging platform ended their own support. Existing followers should still receive notification of my posts and others can get notified from the box on the top-right of this page. Please let me know if you have any problems]

Right now it looks like the government have thrown away the advantages of getting vaccinated early by letting the Delta COVID variant get a hold in the UK. There is little doubt this was because the Prime Minister wanted a trade deal with India, and so put off putting them on the red list. Here is a graph of COVID cases in various countries, and the increase in the UK is because of the Delta variant. 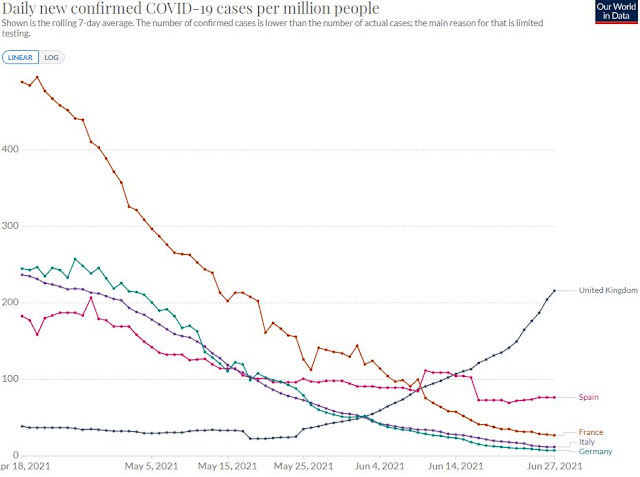 If we hadn’t vaccinated so early this Delta wave would have been far far worse, and we would have either already locked the country down or been talking about doing so. That we are doing neither is because vaccination - particularly two doses of vaccine - is very effective (but not 100%) at stopping people getting the Delta virus, or stopping them going to hospital.

A better description is that we have a race between vaccination and the Delta variant, and the government by delaying putting India on the red list gave Delta a big head start. This head start could be crucial, for a reason I will explain later.

Anyone who thinks from the chart above that other countries are going to escape a Delta wave will be disappointed. Here is a week-old chart from the FT of how the Delta variant is gradually becoming the dominant variant in other countries.

Because Delta is replacing other variants, aggregates will continue to fall until close to the point at which Delta becomes dominant. One by one, we will see those countries that are currently seeing falling cases experience rising cases again. The Delta variant will produce a new COVID wave in the West, just as the Alpha (UK) variant did before.

What makes this wave different is that the age ranges that are vulnerable to dying from COVID have largely been vaccinated, so deaths from the virus should be lower. But even if deaths are very low, there are a number of problems with running a high level of cases of COVID even if it isn’t associated with deaths. The most obvious is the impact on hospitals.

A second concern is Long COVID. At least 10% of those infected with COVID still have serious symptoms 12 weeks later. We do not know, for obvious reasons, whether these numbers will also apply to the Delta variant, but the presumption must be that they will. Allowing another large wave of COVID cases is therefore likely to significantly increase the already large number of people suffering from long COVID.

A third, but time limited, concern is disruption in education. As the Delta variant is mainly being spread among school aged children, it will disrupt the education of many. It is a time limited concern because school holidays are weeks away.

A fourth, and potentially most serious, concern with another wave of cases is that this provides ideal conditions for a new variant to emerge that could seriously diminish the effectiveness of a double dose of vaccine. We just do not know how likely such a development is, but the fact that Delta compromises the effectiveness of one dose suggests complacency is not warranted.

Some have pointed to a falling off of cases in some initial hotspots to suggest that this Delta wave may be short lived. This could be due to a number of factors that have nothing to do with the virus itself, such as school closures and to a smaller extent greater self-isolation among the population in those areas. However even if this pattern is repeated, it will be a long time before we see it at a national level.

The key question is how large a wave we are likely to see in the UK, and whether this will be replicated elsewhere. The bad news is the likelihood that every other region will experience something similar to our current hotspots in time. The potential good news is the summer holidays. The school holidays could reduce the speed of transmission among children, which gives us more time to get everyone vaccinated with two doses.

Which is why the PM’s decision to delay putting India on the red list was so stupid. If other countries are lucky, the school holidays will arrive just in time to prevent what has happened in the UK being repeated all over the West. It will slow down Delta before it really gets going, allowing vaccinations to continue and give those countries a good chance of muting the Delta wave. That chance would have been even greater for the UK if only India had been put on the red list at the same time as Pakistan and Bangladesh.

We can be pretty sure that ‘freedom day’ in the UK will happen while cases are still increasing, hospitalisations are still rising, and deaths will be well into double figures each day. That conjunction says so much about our government: Orwellian to the last. Freedom day as the Delta wave gathers pace.

At the initial stages of a wave, where key data is being revised repeatedly, it is hard to predict the extent of this wave and when its peak will be with any certainty. (We may even see a double-peak wave caused by the summer holidays.) But we can say with near certainty that the implications for hospitals and Long COVID will be very serious indeed.

And the UK government will try and ignore it all. They have made it clear that after much of the population has been vaccinated, they are going to live with COVID. Unfortunately that seems to mean absolving the government in any interest in mitigating the virus. On 17th May face masks were no longer recommended by the government in secondary schools, and that advice has not been reversed despite Delta being mainly transmitted in Schools. (Israel, also highly vaccinated, has been more sensible.) Schemes to help schools improve ventilation have been none. Nothing has been done to improve the government’s lamentable Test and Trace operation, or to incentivise people to self-isolate. The catalogue of failure is endless.

Will the government succeed in pretending there is nothing to worry about during the Delta Wave? Not for long, I suspect. The problem is that there is a small chance that even those who have been vaccinated twice can still get the Delta variant, particularly as this variant is so infectious. With hospitals moving into crisis, I suspect that will make many cautious about a full return to a pre-COVID lifestyle. The UK recovery is likely to be delayed.

While the Delta variant will cause problems for those countries that are well on their way to being fully vaccinated, the real hit will be in those countries that are only starting vaccination. There is a debate about how to get vaccine production to cover all countries as quickly as possible, but it is clear not nearly enough is being done by the West. They must do much more quickly, if only because otherwise the example of the Delta variant could be repeated in an even more serious form, and past experience suggests Western countries will not be able to keep that variant out.