The general expectation is that they will, but is this the right thing to do?

Inflation in August was above target at over 3% (total or core). UK earnings are estimated to be back to their pre-pandemic levels, despite GDP being well below pre-pandemic levels. Chris Giles forcefully puts the case for some tightening.

It is tempting to argue against any tightening by drawing analogies with the US. Their inflation has been running at around 5%, yet the Fed has not yet started tightening, despite a far stronger fiscal stimulus in the US compared to the UK. One argument for ‘seeing through’ current inflation is that it stems from temporary shortages following the end of the pandemic. Latest data for core inflation suggests inflation rates are now beginning to fall.

This applies to the UK, but we also have to add in the impact of Brexit, and more specifically the exodus of EU workers during COVID which is either unable or unwilling to come back. We also need to add in higher gas prices. But these too should be short term effects. Wages in occupations where labour demand exceeds supply will see higher wages, leading to higher prices. This will lead to higher real wages in shortage sectors, and lower real wages everywhere else. That process of adjustment should not take that long.

Of course it is possible that other workers will not accept lower real wages, and they will attempt to avoid that by raising their nominal wage demands. That could lead to a return of stagflation. The headline here is a more polite version of what I actually said, which was that talk of stagflation is dumb. There are two reasons for that. First, workers just do not have the power they had in the 1970s to set wages. Second, a credible central bank with an inflation target stops inflationary shocks leading to higher inflation expectations, and therefore persistent inflation. 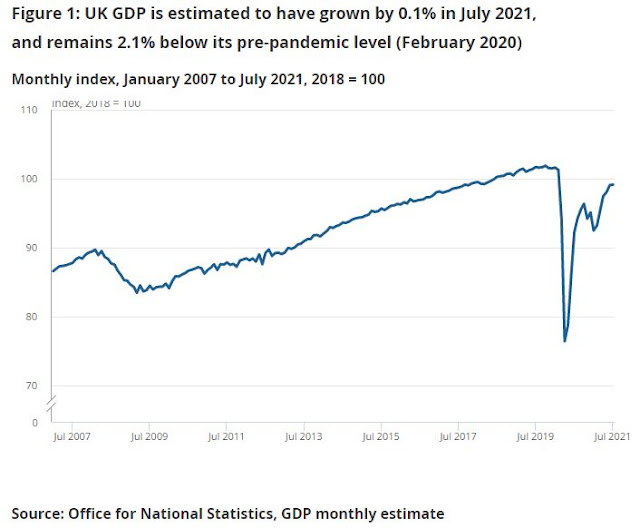 While UK GDP has faltered in the latest month, it is still 2-2.5% below its pre-pandemic peak. I don’t buy estimates of the permanent damage from the pandemic that amount to that large a gap, just as I don’t believe that the Global Financial Crisis was bound to reduce trend GDP by over 7%. The US is likely to soon show that there has been little to no permanent damage there from the pandemic.

There will, however, be some permanent damage to GDP as a result of the exodus of EU workers. The size of that is very uncertain because of the unreliability of the statistics. ONS statistics for labour utilisation are more reliable. 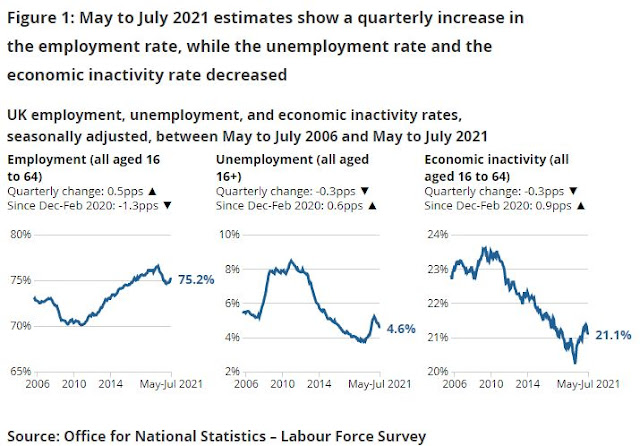 All these series have recent trends, which makes interpretation tricky. But in no case is there even the suggestion that in the early summer the UK had exhausted available labour.

At first sight, the aggregate vacancies data suggest a different picture. However they are strongly influenced by shortages in particular sectors, as the IFS notes here. They estimate that for the majority of workers, competition for relevant new job openings is at least 10% greater than pre-pandemic. Hours worked are also still significantly below pre-pandemic levels, and the number of self-employed workers has fallen substantially (perhaps partly because of recent court judgements).

In summary, the data is consistent with temporary shortages, particularly caused by Brexit, and not an aggregate economy returning to trend. Why is the UK recovery incomplete? There are two important factors. First, the level of fiscal stimulus is modest, and measures like reducing universal credit and future national insurance increases will dampen demand. Second, the pandemic is not over yet in the UK, and some caution may still be present among some consumers.

There seems no case, therefore, for monetary tightening.

What the Bank may well do is to bring their QE programme to a premature end. The direct impact of that is zero, and it’s sufficiently small to have little impact on expectations. What the Bank says may matter more. Again I expect a lot of talk (as here, for example) about monitoring inflation carefully, but if they indicate that a rate rise may be quite soon that would be a mistake. The argument that the Bank’s credibility will fall if they don’t do something is rubbish, equivalent to the idea that expectations may become unhinged. As 2011 showed, it is perfectly possible to ignore temporary increases in inflation and retain credibility.