Most of the controversy around the extra spending for the NHS and social care announced last week focused on the higher rates for national insurance. As Rachel Cunliffe explained here, national insurance contributions are a tax just like income tax or VAT. The misconception that they are payments into some pot of money that you get back later helps explain why this was the tax of choice for Johnson, although the fact that it is not as progressive as income tax (excluding, in particular, rent or interest income) probably helped too.

I'm not going to talk about why national insurance is a very bad way to fund this additional spending because that has been covered elsewhere. However my first myth is that this unfairness has something about ‘generation wars’. When the post war Labour government introduced the state pension in 1946 I don’t know whether anyone said that because money was being taken from the young to give to the old (true) it was unfair on the younger generation, but if they had it would have been nonsense. It is difficult to get your head around, but with that kind of scheme, the old at the time it starts gain a huge amount, but there is no corresponding loser if the scheme continues forever. Some things are about generational transfer (like higher house prices), but schemes where the young will benefit when they are old are not. [1] The reason to oppose the use of national insurance is on normal equity grounds considering who benefits, rather than anything intergenerational.

The second myth I want to talk about is that this package shows that this government is not Thatcherite, or Osbornite, but instead favours a bigger state (and therefore it is more left wing). This myth is believed by a number of Tory MPs, some journalists (the Telegraph’s editor even called it the triumph of socialism) and some on the left. The reality is that it shows no such thing. Instead it is just bowing to the inevitable consequence of having a state funded health service.

The fact of life that few journalists are prepared to admit, and many Tory MPs pretend not to understand, is that in economies such as ours the share of health spending in GDP rises over time. This is something I have talked about for some time, ever since Osborne pretended that he was ‘protecting the NHS’ which journalists parroted. Here, for example, is a post from 2015 that shows a graph of the share of NHS spending in GDP rising from 3% of GDP in the 1950s to over 7% in the 2010s.

There are a number of reasons for this. As our incomes rise our wish to spend money on our health rises faster than our income, while our spending on food (for example) rises less. Doctors are finding better ways (or sometimes ways that didn’t exist previously) of treating us, which often seems to involve expensive drugs or capital equipment. But perhaps most important of all, we are on average living longer but the age our bodies start needing attention has not been rising so rapidly. This point applies to social care as well as the NHS.

The inevitable consequence is that taxes need to rise to match this rising spending. [2] This was masked for a long time by an opposing trend: falling defence spending as a share of GDP. That however came to an end certainly by the turn of the century, which is why the Blair/Brown government increased national insurance to get the NHS to a reasonable level of operation. In contrast Cameron/Osborne were able to run the NHS into the ground again not just because they ran a right wing, small state government, but because they used the false excuse of a runaway government deficit which most of the media and the public believed and because their squeeze began from a fairly good position.

This chart, of how many cancer cases were treated within the target number of days, shows what happened clearly. 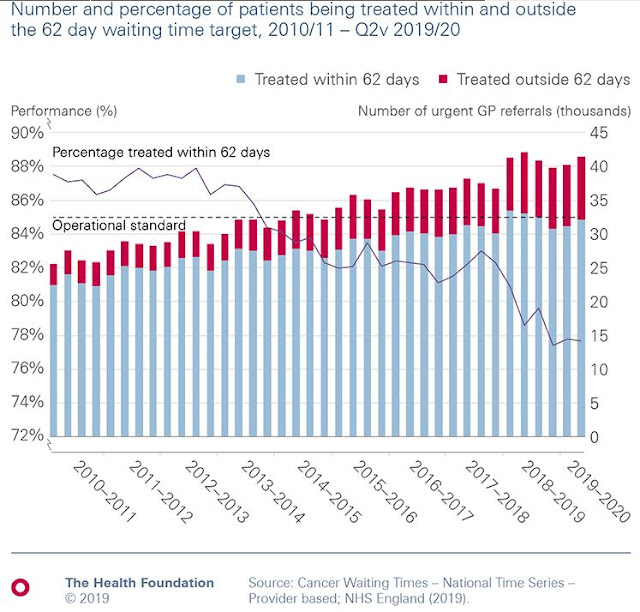 This chart is one of many that show a gradually deteriorating health service since 2010: see here for more information.

This deterioration has stepped up substantially in 2020 because of the COVID pandemic. No government, whether left or right, could have failed to react to this, if it wants to survive in office. So Johnson had to put additional resources into the NHS to clear the backlog created by COVID, and that is what the higher national insurance increase is initially about. It does not make him left wing, it does not raise the scope of the state (which is what really matters politically), and it certainly doesn’t herald a victory for socialism.

At this point we do need to ask whether permanently higher taxes make sense for what is a temporary problem - clearing the COVID backlog of cases. Just as most of the costs of COVID have been paid for with borrowing, why not this? It makes no macroeconomic sense to raise taxes now to cover transitional spending. The obvious answer to this puzzle is that nothing has changed since Osborne, in that we still have a Chancellor who is distorting economic policy just so he will meet some arbitrary deficit targets. This, in turn, is why it is so inaccurate to describe this as a left wing, big state government. Talk to those in local authorities, or in criminal justice, to see that Sunak (whatever Johnson’s wishes) continues to be a small state Chancellor.

But there might be another reason why the government chose to permanently raise taxes? This brings us to myth number three, which is that this package is about improving the quality of social care, even in the longer run. In the short term most of the money raised by the new tax will go to the NHS. What is left for social care will have to cover the cost of reducing the amount the elderly need to pay for their care (but not their living costs). As the IFS says, this aspect has not been costed by the government, but “can be expected to be several billion pounds a year.” Not much if any will be left over to improve the quality of care for the next three years.

“While the precise path for spending – and hence for the availability and quality of care – is unclear, it is clear that the extra funding will not be sufficient to reverse the cuts in the numbers receiving care seen during the 2010s. Thus, while more people will become entitled to financial support as a result of the reforms planned, many people with care needs not considered severe enough will continue to miss out.”

Even the cap on personal social care costs will not necessarily prevent some people having to sell their homes. If your only asset is a £200,000 flat or house you still have to find the 86,000 that is the cap on payments. The government responds by talking about a growing insurance market, but that market is small at present for obvious reasons (adverse selection) and that will not change much with these plans.

What will happen in the longer term, once the pandemic backlog has been dealt with? Here we have to come back to the state of waiting lists before COVID. The NHS does not just need money to catch up with the backlog caused by COVID, it needs money to stop (and even reverse) the deterioration in waiting times that began under austerity.

There are other pressures on NHS budgets too. One is pay. It is not sustainable to keep funding the NHS by decreasing the real value of nurses’ pay. Another is privatisation. The bill currently going through parliament gives ministers the power to circumvent normal procurement rules (competitive tendering), and their past actions suggest they favour giving contracts to private sector friends rather than allowing the NHS to do work in-house. Whatever these private sector companies may claim, that means higher cost to the public sector to fund the profits these companies need to make. [3]

The risk therefore is that after three years not much, if any, of the money created by the national insurance tax increase will end up in social care. As Graham Atkins of the Institute for Government says, “There is a risk that the funding for the NHS to tackle backlogs goes into the baseline NHS budget and the funding never ends up going to local authorities to reform social care.” This risk will be intensified if the government continues to squeeze local authority budgets, which in the short term at least seems likely to happen as Sunak tries to meet his deficit targets.

If higher taxes were really for social care, then it would have made sense to give the NHS temporary money to cover costs arising from the pandemic by borrowing, and direct the funds from higher taxes to social care immediately. Better still delay the tax rise but increase funding straight away to give the economy the boost it clearly needs. One of the reasons this didn't happen is that the NHS needs more money on a permanent basis, and Johnson is a Prime Minister who knows further deterioration in NHS waiting times beyond 2019 levels will risk losing power. Thus the tax increase says very little about the ideology of this government, and instead reflects the continuing desire of Conservative Prime Ministers to retain power. .

[1] The young could lose a bit if they could do better saving themselves and then investing in social care insurance, but when that insurance is scarce and expensive because of adverse selection it seems unlikely.

[2] This is a red flag to twitter MMT, who will say you could borrow or create money instead. But doing so year after year will overheat the economy, so if we are talking about several decades it’s not a very helpful remark. I talk about the immediate short run below.

[3] The usual counterpoint to this is that the private sector have more of an interest in improving efficiency. While that may be true in some areas, it seems highly unlikely for the NHS. The inefficiencies in the current NHS largely stem from a lack of public sector investment.