How many people is Johnson allowing to die as a result of abolishing all COVID restrictions in July?

Of course it is impossible to know for sure. However the following graph is suggestive. 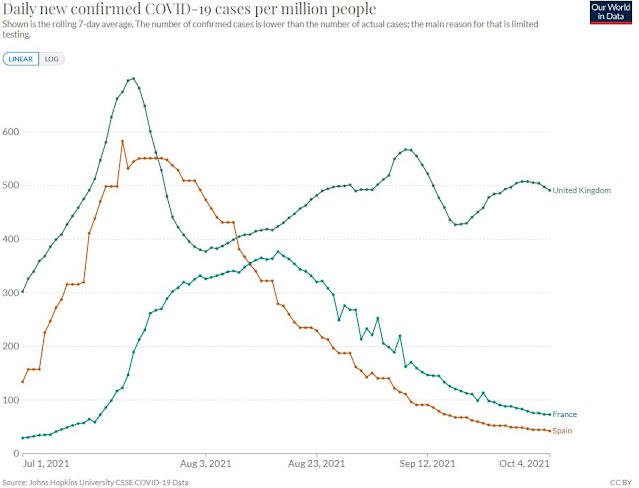 Since Johnson abolished all English COVID restrictions, including mask wearing on 19th July, UK cases have oscillated around a number like 500 per million. In contrast, Spain (which had a similar Delta peak to the UK) has seen cases gradually falling to around 50 per million, and has also kept compulsory mask wearing in various situations along with other restrictions.. France’s Delta wave was a little later and smaller than the UK’s, but since that ended, cases have also come down steadily, and they too have kept some COVID restrictions including mask wearing in risky situations. [1]

Have I chosen France and Spain because it fits this pattern? Other European countries of a similar size, like Germany and Italy, didn’t have a large Delta peak like the UK, and have remained low at or under 100 cases per million. High cases matter for three reasons besides the small proportion who die. First the more cases the more long covid, second more cases means more people off work, and third it stops the economy getting back to normal because many people still minimise social interaction, which reduces social consumption. 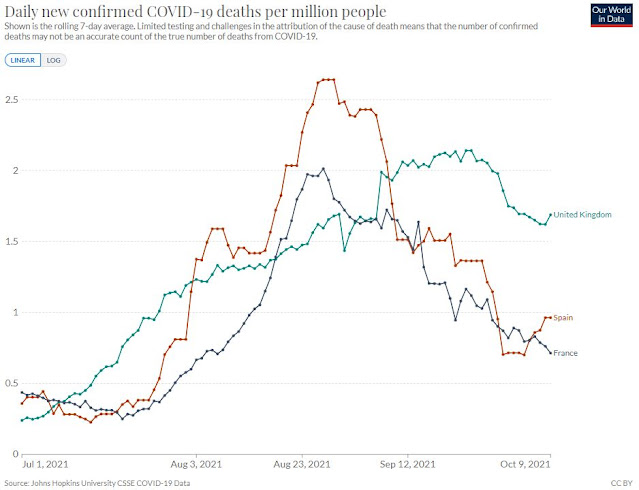 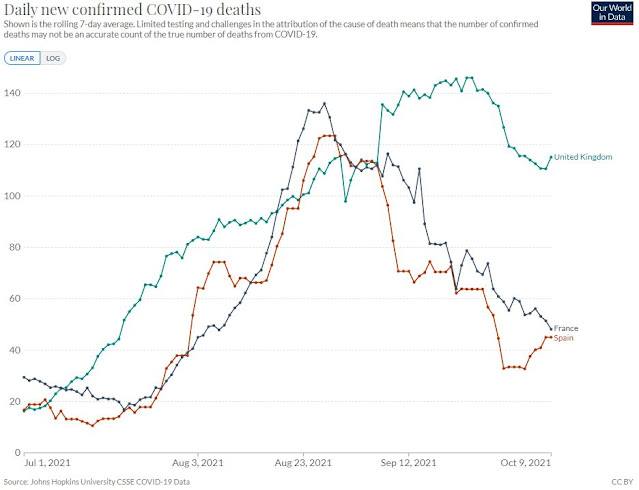 Currently in the UK just under 120 people are dying of COVID each day, while in France and Spain the number is less than half that. So to answer the question of the title, it is likely that around 70 people are currently dying each day as a result of Johnson’s decision to remove all COVID restrictions. That is about 1,700 extra deaths (comparing UK to France) and rising since the beginning of September. Were those extra deaths worth it in terms of freeing many people from wearing a mask and from other modest inconveniences?

For those who are tempted to say 1,700 deaths are small compared to the pandemic total of 137,000 we have already seen, I would say you are not comparing like with like. That huge total was mainly a result of poor use of lockdowns before most people were vaccinated. What we have seen since September, and is likely to continue for some months to come, are deaths when most but not all people were vaccinated, and could have been avoided with modest preventative measures enforced while vaccine coverage was extended to everyone willing. Allowing those people to die when the end (complete as possible coverage) is in sight because he and his MPs didn’t like wearing masks reflects the values of our Prime Minister and his party.

Complicit in all this are those who are supposed to hold our politicians to account, but many of whom instead act more like cheerleaders. Summary numbers appear on news bulletins in a way that makes them meaningless. There is rarely any attempt to place them in context by comparing them with other countries, or to give them a human face. When the BBC finally did the international comparison, as I was writing this blog (but see here), they had the gall to say it had “gone almost unnoticed”. Our leader has declared that we now live with COVID, and our media has by and large decided it is therefore yesterday’s news.

[1] Of course it’s not just about ending compulsory mask wearing that led to these extra deaths. There is an indifference to children getting COVID, starting with abolishing mask wearing before adults, and continuing with no programme to increase school ventilation, and ending with a much slower extension of vaccination to teenagers than in other countries, like Scotland, which is ultimately under the government’s control. It’s about not imposing vaccine passports for certain events, something France has done which has encouraged vaccine take-up. Basically while nearly all other countries continued with personal restrictions designed to bring down cases and continued the drive to vaccinate, Johnson’s government effectively declared in July that the pandemic was over.