Will Sunak bring about an end to the recovery?

We are looking after grandchildren this week, so there may some delay before the next post. That is also the week of Sunak’s Autumn Statement, so no immediate reaction from me I’m afraid. Instead I want to set the scene for the statement, and suggest what I expect he will get wrong.

A good place to start is the latest IMF forecast. As Chris Giles notes in the FT, the UK is expected to have the worst recovery from the pandemic in the G7. 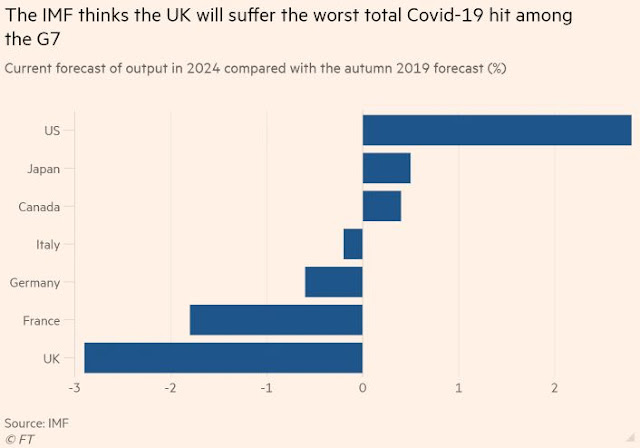 The question everyone should ask Sunak is why. Why should the UK expected to suffer a permanent blow to output and incomes as a result of the pandemic, while the United States is not. I expect the OBR forecast for the UK released with the Statement to maintain this broad ordering, so he cannot brush it off by saying it’s just a forecast. After all, the US recovery already far stronger than in the UK.

I think there are three reasonable answers, all of which are too embarrassing for the Chancellor to admit.

As I suggested, I don’t think you will hear any of the above from Sunak next week. Instead he will talk about record growth of GDP as if the pandemic had never happened. The OBR will talk about the extent of long term scarring caused by the pandemic, but the question they should address is why no such scarring appears to be happening in the US. I’m highly sceptical of assuming a permanent hit to GDP from a pandemic the worst of which is now over. Sunak, and I fear much of the media, will mostly talk about the importance of hitting his targets for the deficit and debt.

As I outlined here, I also think the evidence is clear that currently rising inflation is caused by temporary factors (including some overseas), and there is no indication of generalised excess demand. Raising UK interest rates will not reduce world commodity prices, or solve labour shortages caused by Brexit. For this reason, Sunak and others cannot hide behind rising inflation to justify deflationary measures. There are some similarities to 2011, which saw a big rise in inflation while the economy remained profoundly depressed.

The focus on the public finances, rather than the state of the economy, is the same mistake as happened in 2010 with austerity. True, back then the government worried about the deficit before the recovery had begun, while now at least most of the recovery from the pandemic has occurred. But it is shocking that Sunak is playing the deficit card before the recovery is complete. Holding back on stimulus because of some arbitrary target for debt or deficit makes no macroeconomic sense according to any theory I know, and almost all the empirical evidence suggests its a major mistake. Even the crude political reasons for doing this far ahead of an election are unclear.

It is time to substantially strengthen the fiscal stimulus, by for example reversing the cut in universal credit and increasing public investment (and certainly not cutting back on areas like criminal justice or local authority spending). Many economists agree. The IFS also agrees, saying “we think policy should err on the side of providing more rather than less support”. The lesson of austerity is that if you start to worry about the deficit before the recovery is complete, you are likely to permanently lower the level of UK GDP, and thus reduce average incomes.

The Chancellor is likely to unveil a new fiscal rule in this Autumn Statement. People are very cynical about fiscal rules, but that is because in practice they tend to be very bad rules. A fiscal rule is just a guide to good macro fiscal policy, for a Chancellor or a fiscal council. Any good rule has to recognise the need for fiscal stimulus when interest rates can no longer give a monetary stimulus. Jonathan Portes and I suggested that a fiscal rule should have an automatic switch in it when interest rates are at or may be about to hit their lower bound. Any rule that does not do this or something very similar is a bad fiscal rule.

I don’t share the IFS’s pessimism about fiscal rules. All the half decent rules that have been proposed or enacted (like those of Gordon Brown) blew up because they failed to incorporate some form of lower bound knock out. Once you include some form of recognition that fiscal policy has to provide a ‘whatever it takes’ stimulus once interest rates hit their lower bound, there is no reason why a good fiscal rule should not last.

The government has also operated a cap on public investment of 3% of GDP. That is far too small in the age of climate change, plus the need to level up. You will not hear it in the budget speech, but I fear the Chancellor may cut back on green investment and transport spending in the north to meet this arbitrary target (and have debt falling). What you will get from the OBR is a projection of future public investment, and if it stays at or below 3% of GDP you will know the Chancellor is impoverishing future generations.

The biggest challenge to fiscal rules is not MMT. I don’t see any countries telling their central banks to stop trying to stabilise their economies, and as I explain here that means good fiscal rules are worth having. The real challenge to fiscal rules is climate change. Because of the size of public investment required to green our economy, we shouldn’t expect to start reducing debt to GDP ratios for some time. But more fundamentally, pricing carbon properly will and should hit personal incomes, and those that cannot afford for this to happen need help. That may make the idea of balancing current spending with taxes politically impossible.

On this issue, Sunak is still in the stone age, insisting climate change is not a reason to allow debt to rise (even for green investment!). In the Treasury’s submission on climate change, they point to the polluter pays principle, which is fine if you are prepared to raise taxes to pay for measures to tackle climate change today. As Sunak is not prepared to do this (Conservative Chancellors have each year cancelled the increase in fuel duty for example), then the polluter pays principle cannot apply. While he invokes fairness on future generations, ask yourself if we meet debt targets by not doing enough to tackle climate change, will future generations thank us?

From this leak, it appears even modest green public investment is being resisted by the Treasury. Unless spending on green expenditure and tax changes can be separated out to allow fiscal rules still to apply on non-green taxes and spending, then fiscal rules may just not be worth having if we are serious about tackling climate change.