They lie about everything else, so why is the economy different?

“All Covid rules have been followed” says Johnson when questioned on the Christmas and other lockdown parties that were held at No.10 last year, a mantra repeated by every Conservative MP. Just one problem - parties were not allowed at this time, and organisers were fined £10,000 if they were caught by the police holding parties. So Johnson and every Conservative MP are lying about this. Does this worry those MPs? I doubt it, as it is what they do all the time.

At the end of November the Prime Minister announced some new measures in anticipation of the new Omicron variant, saying these measures were “precautionary”. Does that mean Johnson is taking a precautionary approach? Of course not. SAGE itself recommended working from home and less social mixing. Not the Prime Minister, who thinks we should have a normal Christmas. The health minister Javid even says ‘cautious’ snogging is OK. This is a government that says it’s following the science when it is doing anything but. So what the government is doing is certainly not precautionary. The evidence we have so far suggests this variant will grow very rapidly, and although there may be less deaths than with Delta the NHS is going to be even more overwhelmed than it currently is

The government says it is leveling up. It is not clear what they mean by this, but it is generally understood that this is about helping the poorer parts of England. One of the best things you can do to improve productivity in the North is to improve its transport system, which includes fast links between the major towns and to London. So cancelling HS2 going to Leeds and the Northern Powerhouse Rail line because of some arbitrary Treasury rule limiting public investment is a blow to leveling up. So is changing the social care rules so families with a little wealth will have to pay a much larger proportion than wealthy families. So is funding social care through national insurance increases rather than higher income tax. So is cutting council spending for the most deprived areas by far more than elsewhere. So is directing regeneration funds away from deprived towns and to those that have a Tory MP. It seems leveling up actually means leveling (further) down.

I used to have a friend who moved from academia to working for a City firm giving economic advice. At first he was agonised that all his predictions seemed to go wrong, but then a colleague told him it was fine, he was a good negative predictor. Which meant if he thought X would happen, the guys on the trading floor would know X was unlikely to happen. I think we can take government statements in the same way. If they say they are doing X, they are actually not doing X. My friend got better with time, but this government shows no signs of doing so.

The same applies to the economy. When the government says they have established a strong and stable economy, that is exactly what they have not done. As I showed here, before the Global Financial Crisis (GFC) the economy was much stronger under a Labour government than it has been since the GFC under Conservative Chancellors. Some of that may be bad luck (the trend rate of growth has been falling in most G7 countries), but the disasters of austerity and Brexit are entirely down to the governments that enacted them.

The harm caused by Brexit is very clear in this chart from the IMF. 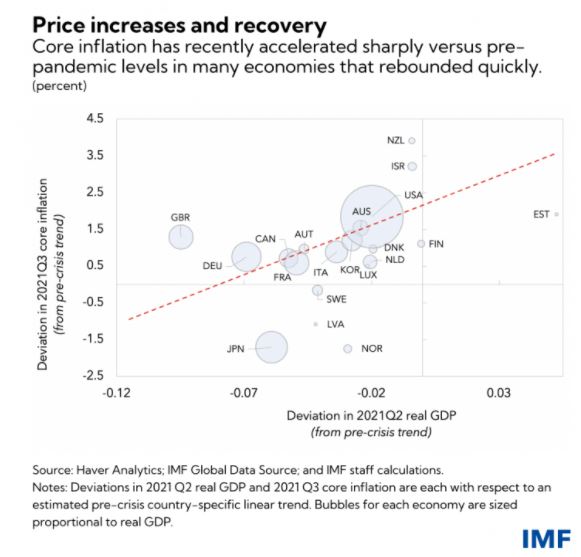 On the horizontal axis is the deviation of GDP from its pre-pandemic trend in the second quarter of 2021. The UK is the worst of all the countries the IMF looked at. On the vertical axis is the deviation of inflation from its pre crisis trend in the third quarter. The UK is among the worst on this score too. We have the unenviable combination of relatively low output and excess inflation. This is partly a result of Brexit, where labour shortages have pushed up prices and wages, and reduced UK growth, but it may also have something to do with the UK’s relatively poor management of the pandemic.

While most people are rightly sceptical of claims that the government followed the rules on Christmas parties at the end of 2020, they seem to buy their line on the economy. Here is an interesting recent Ipsos Mori poll (source, p19). 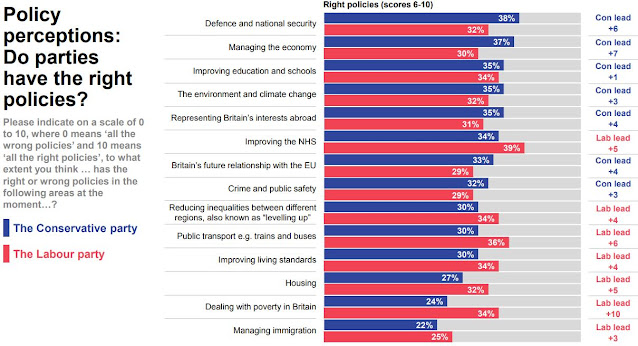 Before speculating on this, we should look further down the poll to the question on which party has the best policies on ‘improving living standards’. Here Labour have a solid lead. Now from my point of view as an academic economist, it is quite hard to improve living standards while not managing the economy well. The two things normally go together. If we ignore academic quibbles, living standards improve by raising productivity and growth, and strong productivity and growth is close to any economist’s definition of managing the economy well.

This puzzle of divergent popular views on these two questions is not peculiar to this poll. Here is a poll from 2013 showing much the same thing. To help answer this puzzle, it may be helpful to look at answers on managing the economy over time. There are two break points. The first was 1992 and the ERM debacle. After that, Labour tended to be ahead on the ‘managing the economy’ question. The second was the Global Financial Crisis, when the lead switched back to the Conservatives.

There are thousands of possible reasons for believing the Conservatives are better at managing the economy but Labour are better at improving living standards, and I’m not really qualified to assess them, or to say which question is more important when people come to vote. But that will not stop me from giving my own theory.

I think for many people ‘the economy’ is a construct that they know little about, and which they see as largely divorced from their everyday experience (unlike living standards). But most voters know the economy is important, because it occupies so much of the media. They also know that big events, like Black Wednesday and the GFC, are very important. So they attribute bad things that happen in the economy to the government in power at the time.

If I’m right, Labour cannot expect poor growth and stagnant living standards to turn around voters’ view about who is best to run the economy. The best they can do is begin to bust the myth that the Conservatives are better at running the economy by explicitly saying the economy is not an abstract thing, but it is all about the average person’s living standards which reflects the growth in total GDP.

To successfully do this they need to take a leaf out of the Tory play book. Conservative MPs, whenever the opportunity arises, talk about how their government has created a strong economy. Labour needs, at every opportunity, to start saying the opposite. That requires 'lines to take' given to all Labour MPs, with quick rebuttals if questioned. But more than that, it requires Labour MPs to start recognising the evidence that the last Labour government was better at managing the economy than the subsequent Conservative governments.