Mark Thoma bemoans the attitude of inflation hawks on the FOMC (the US equivalent of the Bank’s Monetary Policy Committee). He writes “Unfortunately, the hawks on the committee seem to be afraid that if they allow inflation to creep up even a little bit over their long-run target, the inflation flood gates will open and they won’t be able to help themselves from a repeat of the 1970s.” From this profile by Roger Lowenstein, the floodgates view may not be confined to the hawks (HT Karl Smith). It occurred to me that we have just had a little experiment in the UK to test this floodgates view, and it looks like being completely rejected.
The first chart shows the basics on inflation.
The inflation target is 2%. Before 2005 the Monetary Policy Committee (MPC) of the Bank of England had done pretty well : since getting independence inflation had been close to the target. (The target measure of inflation was different at the start, but we do not need to get into these complications.) Since 2005 inflation has been consistently above target, and seriously so over the last two years, hitting a peak of 5.2%.
What have been the consequences? The figure below, from the Bank’s latest inflation report, showed what happened to one year ahead inflation expectations. 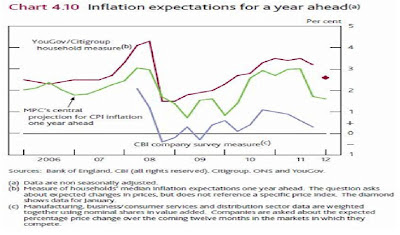 The first point to note (see the green line) is that the Bank did expect to exceed its target (it opened the floodgates!), but the extent of the inflation overshoot was not foreseen. The second is that inflation expectations, as measured by surveys of households, did rise to somewhere between the Bank’s forecast and what actually happened. Similar surveys asking about longer term inflation expectations give numbers between 3% and 4%, which even after allowing for definitional issues is well ahead of the inflation target. Market measures based on swaps show a similar story for longer term inflation expectations. (There are lots of caveats that I’m ignoring, for reasons I hope will become clear. The limitations of these surveys, and others, are discussed in detail by MPC member Adam Posen here.) This is despite the Bank’s forecast, backed up by most other forecasters, which sees inflation coming back to target during this year.
So in a sense this seems to confirm some of the hawks’ fears. Inflation expectations are now above target, and they are not coming down in line with forecaster’s projections. Has this started a wage-price spiral, with inflation out of control?
In a word, no. From the peak of 5.2% in September, inflation has fallen rapidly, and was 3.6% in January. The OECD expects year on year inflation to be 2.7% in 2012, and only 1.3% in 2013. What we have seen is a classic and temporary cost push or supply shock caused by a VAT increase and rising commodity prices.
The reason why all the talk of inflation out of control was nonsense can be seen in the other line from the first chart, which is average earnings inflation. Before the recession, wage inflation was always above price inflation, which is what we would expect because of underlying productivity growth. Since the recession, wage inflation has been invariably below price inflation, which is a consequence of rising UK unemployment. The latest figure for January, released yesterday, gives a year on year increase in earnings of only 1.4%.
So, despite a significant inflation overshoot (part planned, part unplanned), a (modest) rise in inflation expectations, and a huge increase in the monetary base as a result of quantitative easing, there is absolutely no sign of a take-off in inflation.  This should not be a surprise. Sustained increases in inflation involve wage-price spirals, and given high and rising unemployment we are not seeing the wage part of this process. However, this does not prevent inflation hawks being inflation hawks, and others getting cold feet. In the spring of last year, 3 out of 9 members of the MPC voted to tighten monetary policy. That did not make sense in terms of the standard way we think about monetary policy (see my earlier post here), but it did make sense if you believed in a floodgates kind of world.
You might think this does not matter too much, because the hawks are in a minority. However the floodgates view makes it much more difficult to have a sensible public discussion about using promises of higher future inflation to mitigate the zero bound constraint. (This could involve temporarily raising the inflation target, or switching to a price level or nominal GDP target.) As I noted here, there is very little discussion of this option in the UK (although this is a notable exception). I do not think such a monetary policy is an alternative to fiscal stimulus – in fact the two policies can complement each other, as Brad DeLong points out here. However, if a significant proportion of the monetary policy making community view inflation above 2% as the equivalent of just one drink for an alcoholic, then using inflation as a tool rather than just a target will not happen. Of course this UK episode is not the same as raising inflation above 2% when the real economy is no longer depressed, as would occur under a nominal GDP target, but I think it does require those who oppose this policy change to explain why things would be very different in that case.

I would draw one other lesson from this experience. When thinking about inflation, it is a mistake to focus on consumer price inflation alone. We can try and take out various things from the consumer price index to get some ‘core’ measure, but there are two alternative inflation measures already published: output prices (the GDP deflator) and average earnings. We should look at these more often. At the very least this would help avoid silly panics caused by commodity price and other shocks. However there are also good theoretical reasons for looking at these alternative inflation measures, but that has to be for a later post.