The Other Eurozone Crisis

What follows is not a new story: many people have argued that the problems of the Eurozone are as much about private sector expansion, current account imbalances and misalignment, as they are about excessive debt. What follows is an attempt to present this argument in as clear and convincing a way as possible, and say why this matters.
One of the central pieces of macro I teach undergraduates is an adaptation of the Swan diagram. For non-economists this simply plots a demand curve and a supply curve in national competitiveness and output space. As competitiveness improves, exports increase and imports fall, because the demand for domestic output rises. More technically, it describes an economy made up of producers of differentiated traded goods sold in imperfectly competitive markets, so the aggregate demand curve has an obvious interpretation. I draw the supply curve downward sloping following the textbook I use, but it could equally well be vertical.
Here is the diagram applied to the periphery and some quite central Eurozone economies. 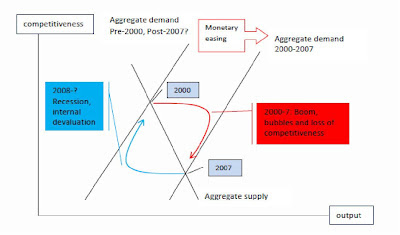 The formation of the Eurozone led to substantial monetary easing in these economies, partly because financial markets wrongly thought that they were subject to risk levels not much different from Germany. The following table looks at two measures of real interest rates (long and short). I’ve missed off 1998-9 because entry was anticipated, so it is not clear where to put these years. I’ve taken current (CPI) inflation away from nominal rates, but hopefully with averages like these using actual rather than expected inflation is not too great a sin. Data is taken from OECD Economic Outlook.

Average Real Interest rates in the Eurozone
Real interest rates fell everywhere in the 2000-7 period (global savings glut?), but the fall was more modest in Germany than anywhere else. Lower real interest rates shift the AD curve to the right. With sticky prices we initially move horizontally from the 2000 point to the new demand curve (competitiveness changes slowly). However, as we are to the right of the supply curve, we get inflation and a loss of competitiveness until we reach 2007. From this date onwards country specific risk begins to return, and the aggregate demand curve shifts back. We need to go back to something like the 2000 position, which requires a recession and an internal devaluation to restore competitiveness. Different countries are at different stages in this process. The country which is furthest on the road back to a sustainable position is probably Ireland (although there are some statistical problems), but in others the process is only just beginning. Given low inflation in Germany, and the difficulty of cutting nominal wages, this road may be particularly painful and long.
Are the falls in real interest rates shown above enough to explain the loss in competitiveness seen in most Eurozone countries relative to Germany? It could be that in many periphery countries, particularly those that experienced housing booms, the key factor was a shift in risk perceptions. This shift could have been triggered by lower interest rates themselves (as some have argued for other countries like the US), or other financial supply side factors (see here, but also here).  Which is true may be important because it is related to how sustainable the original shift in the AD curve was. In theory a persistent reduction in real interest rates could lead to a prolonged shift in the demand curve, and reduced competitiveness, with no reversal of the sort shown in this chart. This is equivalent to asking how sustainable are the pattern of current account deficits and surpluses that emerged in the Eurozone in 2007. As I argued here, the balance of evidence suggests that these imbalances were unsustainable. Here are current accounts over this period.
Posted by Mainly Macro at 20:43