The wrong sort of recovery

First, I want to admit to a failure of imagination. Although I described this post as perhaps one of my better forecasts, I did get one important detail wrong. I said (in May 2012) that if there was a risk that UK growth would not come good by 2015, the Chancellor would apply additional stimulus measures, and I suggested investment incentives for firms as an example. That was a dumb example. I suggested it because I thought it made macroeconomic sense. Yet it was dumb because I also knew by then that this was not the way George Osborne thinks. I should instead have asked myself what stimulus measure would provide the best political advantage. And the obvious answer is to make it easier for people to buy houses, because this pushes up house prices. Now, as an economist, you might think rising house prices is the last thing we need, with UK house price to earnings ratios still very high (see below). But from a political point of view, if you are trying to get homeowners’ votes, it makes a lot of sense to engineer a short term increase in house prices, particularly if you make it immediately easier for those who want to buy to get ‘onto the ladder’.

So that is what the Chancellor did, with his ‘Help to Buy’ scheme, which either provides guarantees for a significant proportion of 95% mortgages, or provided top-up loans for up to 20% of the house price. Frances Coppola is shocked. She writes

“As my regular readers know, I am determinedly politically non-aligned, so what I am going to say now will probably shock a lot of people. Osborne's behaviour both angers and frightens me. He is playing brinkmanship with the UK economy to achieve political ends. Nothing he does makes much sense from an economic point of view - which is why the flagship Help to Buy scheme has been universally panned, even by his own department and by people from his own party. But if you view his actions as entirely determined by his desire to secure a Conservative victory in 2015, it all makes perfect sense. He is dangerous.”

As my regular readers will know, I’m afraid I very much agree. In my ‘final verdict’ on the Chancellor, I wrote “He is a political tactician, who time and again has put party political gain ahead of the economic interests of the economy.” (That should have been ‘of the country’, but you know what I meant.)

However, as I always like to try to think well of this government’s macroeconomic policy, let me put the argument that getting a recovery by making it easier to borrow money to buy houses makes some sense. It goes something like this. An important reason why the recovery so far has been anaemic is that UK banks are broken. So they are being far too cautious in lending for house purchase. In particular, they are worried that house prices could well fall, and they do not want to pick up the tab if this happens. If you think that is a distortion (because you think they are being too risk averse), then Help to Buy just corrects that distortion. In addition, there are good reasons why one of the byproducts of this scheme might be a boost to aggregate demand.

What is wrong with this argument? While the idea that UK banks are being excessively risk averse in their lending to small businesses is quite plausible, the argument applied to housing is not. The chart below is Nationwide’s first time buyer house price to mean gross earnings ratio. 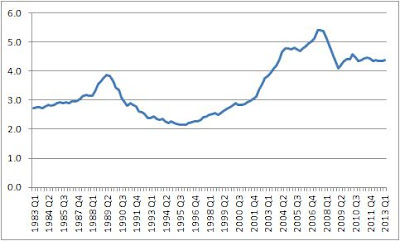 It has fallen as a result of the recession, but remains historically very high. There are two obvious reasons why it is so high: an inability over the last decade or two to increase housing supply in line with demand, and the fact that interest rates are currently very low. It is a clear objective of government policy to remove barriers to increasing supply, and at some point in the not too distant future interest rates are likely to rise. There is therefore a significant chance that in the medium term real house prices will fall. So it is quite reasonable that banks want to transfer that risk on to someone else.

Now you could say why shouldn’t that someone else be the government? What does it matter if at some point in the future taxes are raised or spending cut to pay for the losses the government will incur on these schemes. If it gets us a recovery, that is a cost worth paying. And that is half right. After all, fiscal stimulus involves spending now, but paying for that with higher taxes or lower spending later. Yet this comparison shows how wrong this scheme is. If we borrow now to increase public investment, then when taxes are higher in the future to pay back that borrowing we have something to show for it. If taxes go up in the future to cover the defaults on loans made to house buyers, we have nothing.

So I think Frances is exactly right. The Chancellor is a very skilled political operator, and with schemes like this the UK is in danger of enjoying another five years of bad economic decisions designed to gain party political advantage.