In my last post I wrote: “Mapping macroeconomics into a morality play is almost always a mistake.” I can think of lots of examples. For example: The private sector has to tighten its belt, so the public sector should too. Or: Recessions are a punishment for previous excess.

Within a currency union, when the central bank is willing and able to do its job, these morality stories are often about what happens when one part of the union deviates from the inflation target. (Any deviation of inflation from target is accompanied by unwarranted movements in output: I’ll take these as read in what follows.) Let’s imagine dividing the Eurozone in half, and call each half G and R. So the standard story is that ‘excess’ in R raises inflation in R: to 3% say. The ECB does its job, keeping average inflation at 2%, which means inflation is forced down to 1% in G. This makes G too competitive, so if the ECB was willing or able to keep average inflation at 2% we would have to have a period of 3% inflation in G and 1% in R to put things right.

The morality often drawn here is straightforward: irresponsible excess in R has led to uncomfortable deviations from the ideal of 2% inflation in G. The morality play normally skates over the fact that this excess in at least parts of R was financed by lending from G: morality always seems to reside with the borrower. But we could tell the story a different way. The problem started because G tried to undercut prices in R, by allowing inflation in G to be 1%. As the ECB had to keep average inflation at 2%, this 'forced' inflation in R to 3%. G is now enjoying the benefits of undercutting R, and is very reluctant to undo the process. 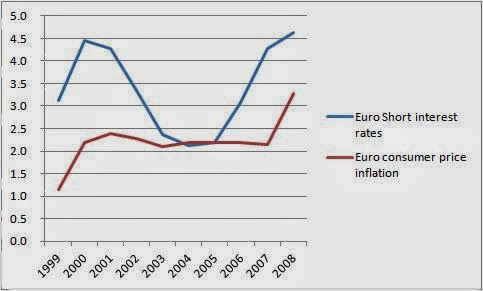 Both the ‘undercutting by G’ story and the more traditional ‘excess in R’ story still contain much too much pseudo morality for my taste. The German government did not deliberately engineer zero growth in domestic demand from 2003-5, any more than governments outside Germany (Greece excepted) tried to stoke up excess demand. In an ideal world both could have used fiscal policy more effectively, but the system hardly encouraged that. But this evidence does suggest that seeing the competitiveness imbalances in the Eurozone as simply the result of excess outside Germany is at best only half the story, and at worst not a very realistic story at all.