The view from Germany

As an exemplar, take this article that appeared in Spiegel (HT MT). It defends Germany against criticism of its current account surplus, but its main worry is not harsh words from the US government, or Paul Krugman, or Martin Wolf, but from Marco Buti of the European Commission. But before saying something about that, or the article itself, we need to be clear about the basic facts. (I have talked about the myths elsewhere.)

From 2000 to 2007, the periphery of the Eurozone (EZ) enjoyed a boom, while Germany did not. As a result, inflation in the periphery (and much else) of the EZ exceeded inflation in Germany by a significant and persistent amount. By 2007, this meant that Germany had become too competitive in relation to the rest of the EZ. This situation is not sustainable. The large German surplus is a symptom of that situation.

Under flexible exchange rates, the German currency would have been able to appreciate against the other EZ countries, eliminating the competitive advantage. In a currency union, the only feasible outcome is for German inflation to run ahead of the rest of the EZ by a significant and persistent amount for a number of years. If the ECB was willing and able to target 2% inflation, then that would mean future German inflation significantly and persistently above 2%. That would require excess demand in Germany, to balance deficient demand in the rest of the EZ. There is really no way around this consequence of a 2% inflation target - it is just arithmetic.

The problem arises because the ECB is unwilling or unable to target 2% inflation. That in theory allows Germany to attempt to force the EZ as a whole to make the required internal adjustment without inflation in Germany exceeding 2%. It can do this by a restrictive fiscal policy. This is exactly what it has done. The figure below shows the underlying primary financial balance in Germany and the whole EZ (including Germany). (Source: Oct 2013 OECD Economic Outlook.) The projected German surpluses are expected to bring down the debt to GDP ratio from 51% of GDP in 2012 to 48.5% of GDP in 2014. 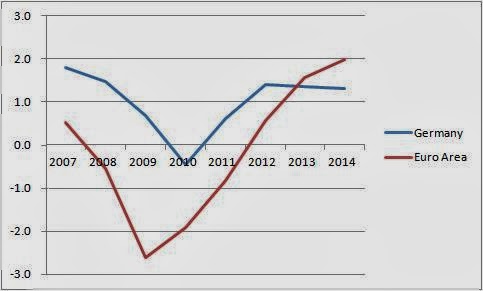 Other EZ countries are defenseless against this deflation, because of imposed austerity or the EZ Fiscal Compact. As a result, the path we seem to be on involves German inflation at around 2% and average EZ inflation well below 2%. This may be in Germany’s narrow national interest, but for the EZ as a whole it is much more costly, partly because of the difficulties of reducing inflation when it is close to zero. Deflation in the EZ as a whole is also costly for those outside the EZ when everyone’s interest rates are near zero (see Francesco Saraceno here).

Much of the Spiegel article is about the pointlessness of blaming Germany for its success in exporting. This of course completely misses the point, but if outside criticism focuses on Germany’s current account rather than its inflation rate it is perhaps not a surprising reaction. The German current account surplus is a symptom of the underlying problem, which is a tight fiscal and monetary policy in the EZ. Whether the tight monetary policy (bringing EZ inflation below 1%) is an unforced or forced error (because interest rates are near zero) is not crucial here, except to the extent that German pressure is behind any reluctance until recently to cut interest rates.

At one point, however, the article does note that criticism of Germany “holds that the Germans live and consume below their means, which is detrimental to foreign companies because there is less demand for their products in Germany.” But its response is to say that this is the fault of “countries like Greece, Italy and Spain, [who] have only themselves to blame for their troubles because they spent years living beyond their means and at the expense of their own competitiveness.” In other words, why should Germany suffer above 2% inflation because the rest of the EZ allowed themselves to become uncompetitive.

Mapping macroeconomics into a morality play is almost always a mistake. So let’s just stick to the rules of how the EZ is supposed to work. The ECB is supposed to have a (‘just below’) 2% inflation target. If it was able to meet that target, Germany would have to suffer 3%+ inflation for a number of years. Now you might respond that the ECB is within its mandate if it targets 1% inflation to allow Germany to only have 2% inflation, because below 2% inflation is allowed. I think that would be stretching the mandate rather a lot (see Andrew Watt here), but even so, if that were true, why didn’t the ECB target 1% inflation from 2000 to 2007 to avoid inflation outside Germany exceeding 2%?

A more reasonable interpretation would be that Germany is either putting pressure on the ECB so that its policies are favourable to the German national interest, or that it is taking advantage of the inability of the ECB to target inflation in a liquidity trap to force inflation below target through a restrictive fiscal policy. It is either trying to circumvent the rules, or take advantage while the referee's whistle is broken. [1]

Which brings us to one referee, which is the European Commission. I have been quite critical of the Commission in the past, and particularly of European Commissioner Olli Rehn (e.g. here). In March I also wrote a post criticising a paper co-written by Marco Buti, Director-General for Economic and Financial Affairs at the European Commission. That paper included the following quote: “In Germany, the fiscal stance is now broadly neutral, hence consistent with the call for a differentiated fiscal stance according to the budgetary space.” I was therefore slightly surprised to see Buti cast as chief German tormenter in the Spiegel article. To quote (my italics): “The chief economist of the European Commission, a native of Italy, has a tendency to blame many euro-zone ills on the nature and effects of German economic policy.” I find it tricky to reconcile Marco Buti’s March paper with this Spiegel description, but perhaps events in the intervening months (and the Commission’s own analysis) have strengthened views which could not have been expressed openly in public. (There are other constraints on the Commission, as John McHale notes here.) Whatever, I hope the Spiegel article is right, and those working for the Commission are applying all the pressure they can to change the view from Germany.

[1] It would be interesting to compare this deflationary bias in the EZ, reflecting a combination of the Fiscal Compact and the Zero Lower Bound, with Keynes’s worries about the Bretton Woods system, which helped create the IMF. Barry Eichengreen draws an analogy between current policies and the 1930s here.