I was pleased to see that David Blanchflower and Adam Posen have advocated using wage inflation as an intermediate target in their analysis of labour market slack in the US. Specifically they say

“Our results also point towards using wage inflation as an additional intermediate target for monetary policy by the FOMC, paralleling on the real activity side the de facto inflation targets on the price stability side.”

I have periodically argued for wage inflation targets in the case of the UK, but both their and my arguments are universal.

My own argument for targeting wage inflation has been a combination of theory and practicality. As I have often pointed out, there are good theoretical arguments for targeting alternative measures of inflation besides consumer prices. The way macroeconomists usually measure the cost of inflation nowadays is to score the distortion to relative prices created by the combination of general inflation and the fact that different prices are set at different times. The ‘ideal’ price index to target would be one that gave a higher weight to prices that changed infrequently, and a low weight to those that were changed often. Wages are just another price in this context, and they are changed infrequently.

The practical argument is that if we had been targeting wage inflation over the last few years, monetary policy would have worried less about the temporary inflation induced by shocks such as commodity price increases or sales taxes. Here is a chart of recent and expected wage inflation (compensation per employee) from the OECD. 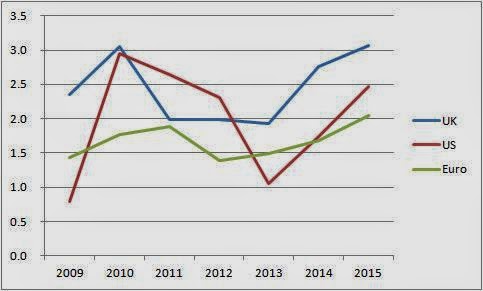 In normal times we would expect 2% price inflation to be associated with something like 4% wage inflation because of productivity growth. Wage inflation has not come close to that number in recent years in the UK, US or the Eurozone. It is difficult to see how the ECB could have raised interest rates in 2011 - as they did - if they had had wage inflation as an intermediate target.

The argument put forward by Blanchflower and Posen is rather different, because they associate wage inflation with the real side of the dual mandate in the US. To quote:

“wage inflation should be considered as the primary target of FOMC policy with respect to the employment stabilization side of the Fed’s dual mandate, at least for now. Unlike unemployment, the rate of wage inflation requires less judgment and is subject to less distortion by such factors as inactivity. At least four of the labor markets measures that Yellen cites as worth monitoring- unemployment, under-employment of part-timers, long-term unemployment, and participation rate- reveal their non-structural component by their influence on wage growth. And that is what the Fed should be trying to stabilize along with prices.”

To paraphrase, unemployment (or anything similar) can become distorted as a measure of labour market slack, but wage inflation is a good indicator of the true state of the labour market.

I would add one final point. The spectre that seems to haunt central bankers is the inflation of the 1970s. That has to be avoided at all costs. Yet the 1970s was associated with what was called a wage-price spiral: both price inflation and wage inflation rising rapidly, and a feeling that this was a contest between workers and firms that neither could win, but where society was a loser. If we want to avoid a wage-price spiral happening again, it is only logical that we look at wages as well as prices.