In an earlier post I sketched out what I thought would be the essential macroeconomic battleground for the forthcoming (2015) general election.

●    The Conservatives would lead on austerity and growth. In May 2012 I suggested the line: “Austerity laid the foundation for our current growth, so we need to stick with it to ensure growth continues”, and the Chancellor has certainly followed my advice! Having linked austerity and growth, the Conservatives will go on to claim that only they can be trusted to deliver more austerity, and therefore continued growth.

●    Labour, on the other hand, will lead on how living standards have stagnated over the last five years, which current growth is unlikely to change before the election. Having offered the Chancellor some spin in May 2012, in that post I thought it was only fair to offer something to the opposition, which was this chart. 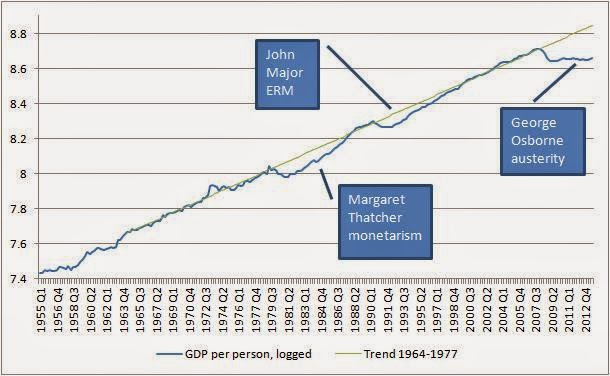 This is all nonsense of course. Osborne’s claim is Orwellian: austerity was not necessary for achieving growth, but actually delayed it. In Labour’s case we have no idea what lies behind the productivity collapse which is the main factor behind the chart above, so ascribing it all to government policy is a bit heroic. Having said that, the more the Chancellor tries to claim credit for employment growth, the more he opens the government up to the idea that they are responsible for the decline in living standards.

For those who are tired of this focus on traditional macroeconomics, there may be some better news. One additional element in the battleground to come might be the issue of inequality, but only if Labour chooses to fight on this ground. The reason is that the Conservatives have signalled that they will reprise their ambition to raise the exemption threshold for inheritance tax from £325,000 up to £1m.

President Obama has said that inequality is the “defining challenge of our time”. Thomas Piketty's “Capital in the Twenty-first Century” emphasises the importance that concentrated wealth is likely to play in increasing this inequality if it is allowed to be transmitted across generations. Inheritance taxes are clearly central to all that. So the Conservative proposal to raise the inheritance tax threshold is in effect saying that they do not regard increasing inequality as a problem.

Will Labour respond by raising the issue of inequality? They have been reluctant to do this in the past, which seems paradoxical. One of the reasons for this paradox that I speculated on here was a view that to be elected Labour has to have some backing from the business sector. This position was recently outlined by Alan Milburn (former Labour cabinet minister) in this FT article. “Labour cannot afford a rerun of the 2010 election campaign, when not a single major corporation was prepared to endorse it. Overcoming that …. will need Labour to embrace a more avowedly pro-business agenda and match it with a more overtly pro-business tone.” He goes on: “Being a “One Nation” party means governing in the interests of all sections of society, better and worse-off alike. Reintroducing a 50p higher income tax rate does not match that objective.” There we have Labour’s dilemma in a nutshell. Taking action to reduce inequality is seen as anti-business, and it is argued that Labour cannot win without some business sector support.

So I read with interest a piece by Ed Balls in the Guardian today. There he majors on the cost of living, but there is just a hint of something more: “the ongoing cost of living crisis is deeper and broader than one or two sets of figures. It's about whether most people on middle and lower incomes see their real earnings grow in line with the growth in the economy.” But inequality is not mentioned once, and fairness is only mentioned in the context of “balancing the books”.

This is hardly raising inequality as a “defining challenge of our time”. Does this reflect a genuine difference between the left on either side of the pond, or simply that Obama is in power and Ed Balls is not? If it is the latter, is Labour right to fear that going strong on inequality would lose them the election? Let me end with some encouragement from an unlikely source. A recent Financial Times leader argued that

“ratcheting up the IHT threshold to £1m cannot be justified at present. Making this promise is good pre-election Conservative politics. Implementing it in these austere times would be socially unjust.”

They make a number of important points. Even if thresholds remain unchanged, and despite high house prices, the OBR estimate that just 10% of estates will be liable to pay any tax at all. Implementing the £1 million threshold would cost the Treasury more than £3bn, which in times of austerity is money that could be better used elsewhere. And finally they say that redistribution is vital if inequality is not to be exacerbated. When the FT starts worrying about inequality, perhaps this is after all a battle that Labour can win.
Posted by Mainly Macro at 12:34