The race to raise interest rates

If you do not like the sporting metaphors in the post below, you can blame new MPC member Andy Haldane whose speech I have just read. Or maybe the World Cup.

When it comes to monetary policy, in recent years the UK has consistently followed the US. The US Fed started reducing interest rates in September 2007, and hit the Zero Lower Bound (ZLB) at the end of 2008. The UK’s MPC started reducing interest rates in October 2008, and hit the ZLB in March 2009. The lag between the two shortened considerably with Quantitative Easing, which the UK started just two months after the US. The MPC also followed the Fed with forward guidance, using a very similar formula.

The big question today for monetary policy in both the US and UK is when interest rates will start to increase. Until very recently this looked like a race that neither central bank was keen to enter, at least for a while. But that all changed last week following a speech by UK Governor Mark Carney. That led Gavyn Davies to ask what implications UK hawkishness might have on the US. It is very easy with such things to get lost in the immediacy of each new data release. In this post I’ll try and focus on the fundamentals.

Both central banks prioritise price inflation. UK inflation remains comfortably below target at 1.5%. US inflation had been in similar territory. The CPI rose by slightly more than 2% in May, but that is more volatile than the measure the Fed targets, so it is too soon to know whether this represents the beginning of a return of inflation to target. The FOMC committee’s latest forecasts indicate that inflation will remain below target for some time.

If the May CPI figure in the US turns out to be a blip, then there appears to be no immediate pressure to raise rates. However interest rate changes take time to feed through to inflation. As a result both central banks would like to start raising rates before rather than after the underlying level of inflation starts to exceed its target. Whether this is a sensible strategy I will discuss later, but it means the focus in both countries is on what determines future price inflation.

Here the UK seems to be in the lead, with stronger GDP growth than in the US. However economies often grow very rapidly when emerging from a deep recession. US growth was strong in 2010, but the Fed did not start raising rates then. The US has been growing at a moderate pace ever since, while the UK economy stagnated in 2011 and 2012. With this perspective, the US has not raised rates even after 5 years of recovery, so it seems odd that the UK should raise rates after just two years.

Economists would normally say that the more relevant measure for inflation is the output gap: an estimate of how much actual GDP is below the level at which inflation would be stable. Here most estimates suggest the UK is ‘winning’: the latest OECD Economic Outlook estimates for 2014 are UK -1% and US -3.1%. Now output gap estimates should normally be taken with a pinch of salt, but for the UK in recent years this pinch has become a spoonful. Most UK estimates assume that the marked decline in UK productivity growth since the recession (the UK ‘productivity puzzle’) is largely permanent. But as no one has any idea about why this decline has happened (hence puzzle), there is no compelling reason to assume it is permanent rather than reversible.

We can make the same point in a very simple way. UK output is currently around the same level as it was in January 2008, while US output is over 6% above its pre-recession peak. This would normally imply that the UK should be following well behind the US in raising rates.
What about the labour market? Here is a chart comparing unemployment in both countries. 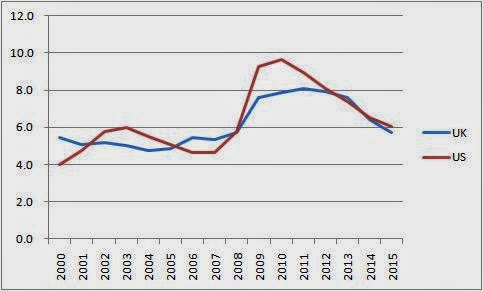 I have taken the OECD’s latest Economic Outlook forecast for the US, but I have used much more optimistic numbers for the UK: 6.4% for 2014, and 5.7% for 2015. (Unemployment in May was 6.6%.) It is true that for unemployment, the lag between the UK recovery and the US recovery is shorter than for GDP growth. However they seem to be in similar territory at the moment, with unemployment unlikely to return to 2000-2007 numbers by 2015. In addition, there may be more labour market slack than is implied by these numbers, although for different reasons in each country. One final point worth noting is that, with free movement of labour within the EU, any labour market pressure in the UK can be offset by inward migration as long as Eurozone unemployment remains high.

There is no indication of any tightening in the labour market in either economy from data on wages. In the US real wages are stagnant, and wage growth in the UK continues to be below price inflation. In the UK, there is even some doubt whether rising real wages would put that much upward pressure on price inflation. Some part of the UK productivity puzzle must be the result of factor substitution: using labour rather than machines because real wages are low relative to the cost of capital. If that is the case, there is scope to reverse this if real wages start to rise, meaning that wage increases are not fully passed on into prices.

One area which is often talked about where the UK is well ahead is the housing market, with UK prices rising rapidly. House prices are not part of the consumer prices index, but some argue that they should be. This is problematic conceptually - rents are the price of housing services, and house prices are the price of an asset. As I pointed out here, what we have in the UK at the moment is a rise in house prices relative to rents, which may in turn reflect the combination of falling interest rates and static supply, plus perhaps a bit of froth on top. According to the ONS data, rents have not been rising rapidly since the recession.

As John Williams among many others have emphasised, using interest rates to calm the housing market when inflation is below target has proved disastrous for Sweden and Norway. A housing boom is not a reliable indicator of incipient inflation. The UK should certainly not follow the Scandinavian example in this particular respect.

Taking all this together, who will be the first to raise rates? My feeling is that US monetary policy makers are on reasonably solid ground, and are not even in their starting blocks. The output gap in the US is sufficiently large that there is little need to start raising rates now. UK monetary policy makers are in a much more difficult place, because of the UK productivity puzzle. The Carney speech has in effect tightened monetary policy by appreciating the exchange rate, as he must have known it would. Before this I had hoped that they would at least wait until real wages started rising significantly, but now I’m less sure. I fear after the Carney speech that they have entered the starting blocks, and any noise might trigger a false start.

The problem for the UK is that the strategy of wanting to start raising rates before inflation exceeds the target is inappropriate given the extreme uncertainties implied by the productivity puzzle. As Mark Thoma explains, and I have argued before, the risks are not symmetric. It would be unfortunate if inflation started rising before interest rates started increasing, but the costs of a few years of excess inflation would not be that great. The MPC has after all been there recently, and the world did not come to an end. The costs of prematurely choking off a recovery are much greater when recent productivity and output losses might be recoverable (as they were in the early 1980s and 1990s). These are very strong grounds for the Bank of England to continue to follow the US Fed, and not jump the gun.


Postscript: Tony Yates elaborates on this last point, and also has more on the Haldane speech.