This starts off with some rather specific politics, but we get back to some economics at the end.

This post is prompted by an article by Andrew Rawnsley on Labour leader Ed Miliband’s dismal poll ratings, despite the Labour party being ahead in the polls. Rawnsley carefully goes through possible explanations. Is it because he is too left wing? No, the public are to the left of Labour on a number of issues. Is it because Labour’s policies are unpopular? No, some of the policies that have been announced have been very popular, like an energy price freeze. So it seems to be something more personal. To quote: “Voters consistently tell pollsters that they regard him as inexperienced, weak and incapable of being decisive.”

Let’s take each of those in turn. Inexperienced does not wash: as Rawnsley notes: “He has been a member of the cabinet, which is more than either Tony Blair or David Cameron had been before they became prime minister.” But ‘weak’ also seems inappropriate: as Neil Kinnock points out, he had the courage to take on the Murdoch press when other politicians did not.

Wait a minute. Here we have an obvious solution to the Miliband puzzle. The right wing press has taken every opportunity to attack Miliband. Do people tell pollsters that Miliband is not fit to be Prime Minister because they keep reading that he is not fit to be Prime Minister? Rawnsley mentions this possibility, and rather than dismissing it, he simply says that Labour has to “deal with this rather than whinge about it.” He goes on to say

“When you know that a substantial section of the media is looking for any opportunity to ridicule you, best not to gift them a picture of you looking silly as you are vanquished by a bacon butty. It was even less wise to try to truckle to those who would destroy him by sticking a daft grin on his face and posing with a copy of the Sun.” 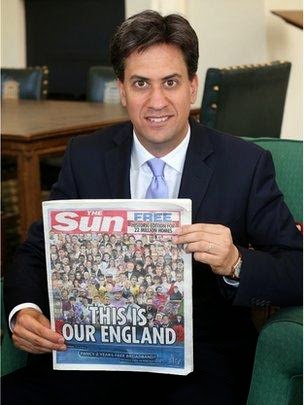 For those who do not already know why that was a crass thing to do, see here. Go back to those personal failings again. Weak and incapable of being decisive? What could appear more weak and indecisive than trying to appease the Murdoch press that is conducting a campaign against you?

Posing with a copy of the Sun is trivial stuff, but it may be emblematic. What is clearly lacking for Labour at the moment is what those in the US would describe as firing up the base. This is particularly important for Labour, because it is strong among young people, but young people tend to be cynical about politics and less likely to vote. It is why many think David Axelrod has been brought in to help. There is also an obvious issue that can do this job for Labour: inequality. Just as in the US, people think income and wealth should be more equally shared, and their perceptions underestimate how much inequality there actually is. Whether justified or not, high CEO and banker’s pay is not popular.

When in government, Labour was strong on measures to tackle poverty, but famously ‘relaxed’ about inequality. For some in the Labour leadership this may have reflected their underlying beliefs, but for others it may have been just a device to distance the party from ‘old Labour’. If the latter, that job has been done. Shadow Chancellor Ed Balls has talked about wanting to see the benefits of growth widely distributed, but if that is a subtle call for less inequality it is way too coded to fire up anyone. Labour, unlike the Conservatives or LibDems, is pledged to restore the 50p top tax rate, but it appears only as a means of getting the deficit down.

So why does Miliband not follow Obama and put inequality centre stage? This could achieve the twin goals of rallying those on the left, and appearing strong and decisive. For a possible answer we can go back to Rawnsley again. “There are senior Labour people, and not just of the Blairite persuasion, who think that he has struck too many positions that look ‘anti-business’ and ‘anti-aspirational’. That may well put off some swing voters ….” So the advice Miliband may be receiving is don’t mention inequality, because that might appear anti-business and anti-aspirational. Perhaps the same people have suggested he is photographed posing with some banking CEOs instead?