If fiscal policy is important at the zero lower bound, why did the US recovery continue in 2012 and 2013 despite a large fiscal contraction? Or to put the same question in a comparative way, why was the Eurozone’s fiscal contraction in 2012/3 associated with a recession, but not in the case of the US? 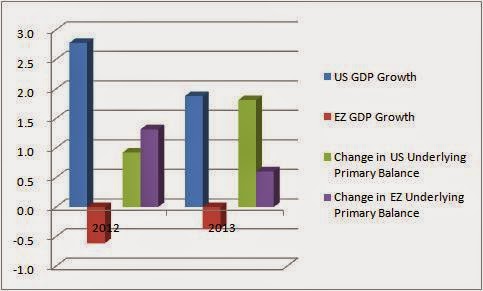 GDP growth had been reasonable in both the US and the EZ in 2010 and 2011. While US growth continued into 2012/3, EZ growth collapsed. Yet as the chart above shows, fiscal tightening was only slightly greater in the EZ in 2012, and became considerably tighter in the US in 2013.

Before discussing this, it is important to make two important points. The first is that the macroeconomy is complex, involving important lags in behaviour and expectations of future events. For that reason alone, you will not get precise matches between causes and consequences by just eyeballing the data. Second, different fiscal measures have different effects, and trying to express the fiscal stance in one simple measure will always be a crude approximation. However, despite these qualifications, I think we can provide something of an answer to this question by just looking at the numbers.

In comparative terms, there are two obvious answers looking at 2012. The first is the EZ crisis. Although this began in 2010, it reached a critical position in 2012, when Greece was almost forced out. It is hardly surprising in these uncertain circumstances that EZ investment fell by nearly 4% in 2012. The second is monetary policy. The ECB raised rates from 1% to 1.5% in 2011, and compared to the US there was no Quantitative Easing. Combining the two, monetary conditions tightened considerably in the periphery as a result of the crisis. There was no comparable crisis in the US, which allowed investment to increase by 5.5%.

Explaining 2013 seems more difficult. Monetary policy had eased in the EZ (although of course not by as much as it should have), and OMT had brought the crisis to an end. In the US there was considerable fiscal tightening. So why did the US continue to grow and EZ GDP continue to fall?

For the EZ one proximate cause was a sharp decline in the contribution of net exports. Net exports added 1.5% to GDP in 2012, but only 0.5% in 2013. If this contribution had been more even at 1% in each year, GDP would have fallen by over 1% in 2012, and stayed roughly flat in 2013. Fiscal policy continued to tighten, which also would have reduced growth.

In the US something else happened: the savings ratio, which had been elevated at 5.5% or above since 2009, fell to 4.5%. This could have been a result of fiscal tightening, but it seems more probable that it represented the end of a prolonged balance sheet correction. (The US savings ratio averaged 4.5% between 1996 and 2007 and the OECD’s forecasters expect it to fall further this year and next.) The OECD estimates that the US output gap in 2013 was -3.5%, which was much the same as their estimate for 2012. So growth of 2% did nothing to close the output gap in 2013. This was despite a large fall in the savings ratio, perhaps bringing to an end the balance sheet correction that began with the Great Recession. So US growth in 2013 should have been very strong, and the obvious explanation for why it was not is very restrictive fiscal policy.

Email ThisBlogThis!Share to TwitterShare to FacebookShare to Pinterest
Labels: 2012, 2013, Euro, fiscal, monetary, US