Has the Great Recession killed the traditional Phillips Curve?

After the New Classical revolution came the New Keynesian Phillips Curve (NKPC), which had current inflation depending on some measure of the output/unemployment gap and the expected value of inflation in the next period. If this was combined with adaptive expectations, it would amount to much the same thing as the FPPC, but instead it was normally combined with rational expectations, where agents made their best guess at what inflation would be next period using all relevant information. This would include past inflation, but it would include other things as well, like prospects for output and any official inflation target.

Which better describes the data? The great attraction of the FPPC is that it can describe stagflation. We have a boom, which while it lasts steadily raises inflation. When the boom comes to an end, inflation stabilises, but at a much higher level than it began. So policy has to engineer a recession to get inflation back down again: a period in which above average unemployment is accompanied by above average inflation, which we call stagflation. If over this period we had had credible independent central banks setting inflation targets, the NKPC would not give us stagflation: when the boom came to an end, inflation would return to target. (For more explanation, see this post.) The trouble is we did not have inflation targeting during this period, so it is difficult to tell whether stagflation is evidence against the NKPC. (As an example of this ambiguity, see this survey of the empirical evidence by Nason and Smith. This enabled Robert Gordon to be quite supportive of the FPPC in 2009.)

The Great Recession could provide a much better test. In some countries output fell sharply in 2009, but has since seen a slow but steady recovery, such that the output gap today is less than it was in 2009. With the FPPC, inflation should have been steadily falling over this period, reaching its lowest level today. So if we plotted the output gap (x axis) and inflation (y axis) together, we should see a line pointing South East. With the NKPC, we can consider two polar cases. In the first, agents fully anticipate that the recovery will be slow, so we will get a sharp immediate fall in inflation, but subsequently inflation will rise towards the target. That will give us a line pointing North East. In the second, agents keep thinking inflation will return to target next year. That also gives us a line pointing North East, but it is flatter. [Postscript - I should have added that this last gives us what Krugman calls the Neo-paleo-Keynesian Phillips curve.]

Here is this plot for four countries, using OECD estimates for the output gap on the horizontal axis, consumer price inflation less 2% on the vertical axis, and OECD forecasts for 2014 and 2015. I’ve chosen these countries simply because in most of Europe we had a double dip recession, which is a more complicated experiment. If you do not like the idea of including forecasts, just ignore the last two points for each country. 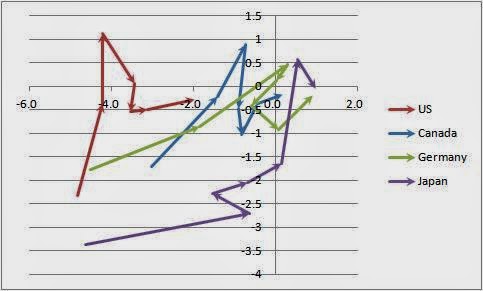 The lines point North East, not South East. This gives more support to the rational expectations NKPC than the adaptive expectations FPPC. To take just one example, US inflation in 2013 is higher than it was in 2009, which is consistent with the NKPC. The traditional FPPC, on the other hand, would suggest that after a string of negative output gaps, US inflation should be a lot lower in 2013 than it was in 2009.

OK, now the caveats. Commodity prices will have an important influence on the CPI, and these are not part of either simple Phillips curve story. They may help explain the blip in inflation around 2011 in some countries, but they also helped depress inflation in 2009. Exchange rate changes will also matter. The simple Phillips curve also takes no account of non-linearity caused by a reluctance to cut nominal wages. And of course estimates of the output gap may be wrong.

In the case of Japan, we also had a recent increase in the inflation target. This may explain the forecast upward shift in inflation in 2014/5. If it does, that is clear evidence in favour of rational rather than adaptive expectations.

All these caveats point to the need to do more empirical analysis. Nevertheless we can see why some more elaborate studies (like this for the US) can claim that recent inflation experience is consistent with the NKPC. It seems much more difficult to square this experience with the traditional adaptive expectations Phillips curve. As I suggested at the beginning, this is really a test of whether rational expectations is a better description of reality than adaptive expectations. But I know the conclusion I draw from the data will upset some people, so I look forward to a more sophisticated empirical analysis showing why I’m wrong.