Aggregate demand and the labour market

I’m surprised I do not see a diagram like this more often: 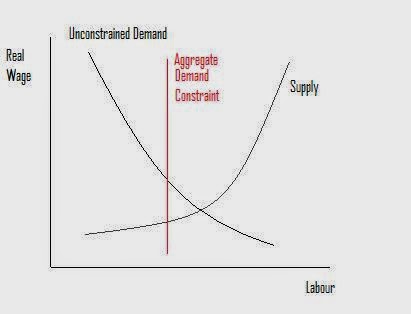 The black lines are familiar from any introductory macro textbook. There is a labour supply curve. It is drawn such that a higher real wage encourages more labour supply, but I will consider what happens if it is vertical later. What I call the ‘unconstrained labour demand’ curve is what firms would choose to do if (a) labour gets less productive as output increases (which is why the curve slopes downward), and (b) firms can sell whatever they like. This is the classical model, and you will find this diagram in nearly every introductory textbook. With flexible wages the level of employment is determined at the intersection of the two curves, and we could call it the ‘natural’ employment level.

However (b) is a fiction. No (surviving) firm produces what it wants to, irrespective of whether people want to buy its product. Aggregate demand can diverge from the level of output implied by the intersection of the two black curves for all kinds of reasons: Says Law does not hold. For simplicity, suppose the aggregate demand for goods in the economy is independent of the real wage, and there is no factor substitution. In that case employment is determined by my red line - it is determined only by aggregate demand. This is pretty clear in the case that I have drawn, where we have deficient aggregate demand. Firms produce what they can sell: they would like to sell more, but there is no point producing more if no one wants to buy more.

It is less clear what happens if the red line shifts right until we have excess aggregate demand. If the number of firms is fixed, why would they produce more than they want to - i.e. at a level where they are losing money on the extra products they are producing? In New Keynesian models where firms are monopolistic and prices are sticky they will produce more if excess demand is modest, because for given prices it is profitable to produce more up to some limit. But will firms be prepared to pay higher (e.g. overtime) wages to workers for long, or will workers be prepared to work more for unchanged wages for long? I will come back to this at the end.

If there is deficient demand, is there anything that makes the red line move right to achieve the natural employment level? With deficient demand, prices may tend to fall, but that alone is unlikely to shift the red line to the right: few people talk about Pigou effects anymore, and the general concern is that deflation is deflationary because the real value of debt has increased. It is monetary policy that shifts the red line in the required direction, either because it responds to falling prices or because it wants to reduce the output gap. Ironically, Real Business Cycle models, which assume the red line is always at the natural employment level, only make sense in a world where monetary policy is very efficient. However, monetary policy does normally work over the medium term, which is why the classical or RBC model makes sense if we are just doing medium/long term analysis.

What happens to the real wage? In the most basic of New Keynesian models, the labour market clears, which means real wages fall until the labour supply curve intersects the red line. (Here a vertical supply curve would be a problem.) If, in contrast, real wages were sticky, we would get involuntary unemployment - rationing in the labour market. Which is true matters a great deal to those unemployed, but it terms of modelling deviations from the natural rate the difference is not that great. Real wages have no direct impact on aggregate demand, and so all that might happen is that monetary policy could be influenced one way or the other. If it is not, what happens to real wages is irrelevant to the basic problem, which is deficient aggregate demand. This is one reason why New Keynesian economists may be happy to work with a model where the labour market clears, but there may be other reasons.

The vertical red line assumes no factor substitution. With factor substitution it can become downward sloping: falling real wages lead firms to substitute labour for capital, which can increase employment even if output is unchanged because aggregate demand is unchanged. As I speculate in this post, based on the work of Pessoa and Van Reenen, something like this could help explain the current UK productivity puzzle. If this speculation is correct, at some point as aggregate demand and investment expands real wages will rise, and labour productivity will increase as factor substitution is reversed.

I was prompted to write this post by this from Noah Smith, which in turn comments on a post by John Quiggin. (See also Mike Konczal and Nick Rowe.) They talk about models of labour market matching, which I have not mentioned, but similar considerations apply with matching models taking the place of the classical model (although there are key differences between the two). This gives me another chance to plug an AER paper by Pascal Michaillat, which addresses the possible asymmetry that may occur when we have excess demand. Michaillat’s model is a matching model when aggregate demand is strong, but a rationing model (with Keynesian involuntary unemployment) when aggregate demand is low. This is one, rather interesting, answer to the question I asked above about possible asymmetry. Putting matching together with Keynesian rationing is complicated, but if Michaillat’s paper is ignored just for this reason, that says something rather sad about current macro methodology.
Posted by Mainly Macro at 15:05