Hitting the poor and the disabled

In the UK, Wales has a degree of regional autonomy. This has helped shed some light on two aspects of UK government policy: taking income from the disabled and the working poor.

The Welsh government asked the highly respected Institute of Fiscal Studies (IFS) to examine the cumulative impact of the coalition government’s tax and benefit reforms up until April 2015. Ideally we would like such an assessment for the UK, but the government has said this would be ‘difficult’ and ‘meaningless’. However there is no reason why findings for Wales should be very different to the UK as a whole, and the Welsh government - run by Labour - had no inhibitions asking the IFS to do this for Wales.

In terms of income distribution, the report’s findings are summarised in this chart. 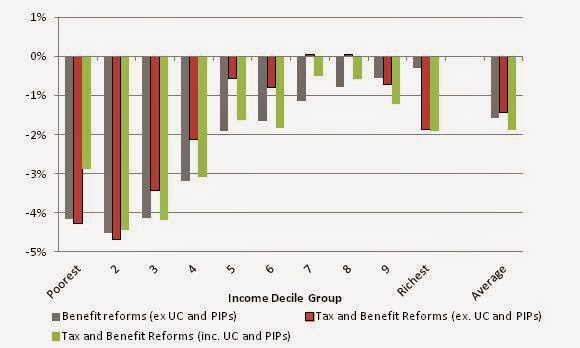 Summary of gains and losses across the income distribution, 2014–15 prices. From “The distributional effects of the UK government’s tax and welfare reforms in Wales: an update” by David Phillips, IFS.

The chart speaks for itself, except to say that UC and PIP stand for the new Universal Credit and Personal Independence Payments schemes, which will not have their full impact until beyond 2015.

The study also looks at how this breaks down among particular groups. Pensioners fare relatively well, losing only 0.5% of income as a result of all these changes. In contrast the working age disabled are hit relatively badly, suffering on average a 6.5% loss. Yet this loss may pale into insignificance compared to the fear that has been created by the government’s new assessment procedures, contracted out to private firms whose methods are confidential. (See also these case studies by Demos, and Alex Marsh and the Economist on the government’s welfare reform in general.)

You might cynically think that this kind of thing is an inevitable result of austerity, where help to the poor and disabled is considered a luxury that society can no longer afford. Certainly the UK is not alone here. However the second policy has nothing to do with austerity. As part of its drive to reduce ‘red tape’, the government abolished the Agricultural Wages Board (AWB), the last surviving wages council which set minimum terms and conditions for agricultural workers. The government’s argument was that the Board hindered ‘flexibility’ in the labour market, and that it duplicated the role of the national minimum wage.

The last argument is simplistic. Although the AWB set a basic hourly rate very similar to the national minimum wage, it also set overtime rates, which as anyone living near a farm will know are particularly relevant to farm workers. The importance of this can be found from the government’s own impact assessment of abolition, which suggests a transfer of as much as £33.4 million from farm workers to farm owners as a result of abolishing the AWB. (Farm workers are poorly paid on average: in 2011 the average wage was £8.17 per hour, compared to a minimum wage of £6.08.)

As to the need to increase market flexibility by reducing external intervention, this is particularly rich given the scale of public subsidies received by this sector. This government has fought hard to maintain the subsidies from Europe that go to large farms, so no free market there. Farm workers themselves are particularly powerless compared to their employers, which is why the AWB was the one wages council that the previous Conservative government did not abolish in 1993.

What has this got to do with Wales? The Welsh government argued that it had the power to keep an AWB for Wales. The UK government disagreed, and took this all the way to the Supreme Court, but last Wednesday it lost. So Welsh farm workers will retain some protection.

I would love to say that these two cases are isolated examples, but they are not. Conservative ministers have recently proposed additional restrictions on the right to strike, requiring over 50% of all eligible members to vote in favour of strike action before a strike can be called. As Steven Toft says, this is a strikingly stupid idea, and is essentially just an attempt to further weaken an already weak trade union movement. In terms of the future of the welfare state, the Chancellor’s plans for future austerity require yet further reductions. With pensions protected, this means the disabled will be in the firing line once again.
Posted by Mainly Macro at 09:55