If minimum wages, why not maximum wages?

I was in a gathering of academics the other day, and we were discussing minimum wages. The debate moved on to increasing inequality, and the difficulty of doing anything about it. I said why not have a maximum wage? To say that the idea was greeted with incredulity would be an understatement. So you want to bring back price controls was once response. How could you possibly decide on what a maximum wage should be was another.

So why the asymmetry? Why is the idea of setting a maximum wage considered outlandish among economists?

The problem is clear enough. All the evidence, in the US and UK, points to the income of the top 1% rising much faster than the average. Although the share of income going to the top 1% in the UK fell sharply in 2010, the more up to date evidence from the US suggests this may be a temporary blip caused by the recession. The latest report from the High Pay Centre in the UK says: 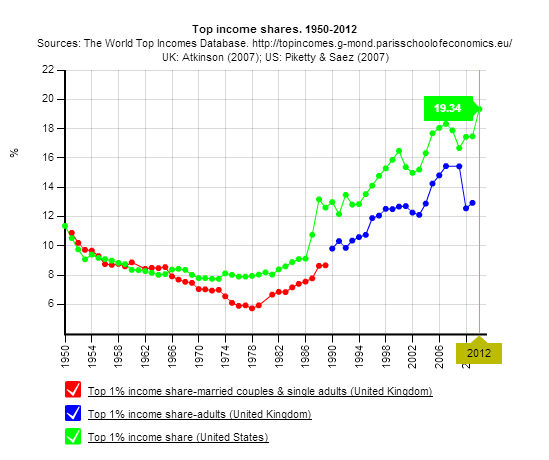 I find the attempts of some economists and journalists to divert attention away from this problem very revealing. The most common tactic is to talk about some other measure of inequality, whereas what is really extraordinary and what worries many people is the rise in incomes at the very top. The suggestion that we should not worry about national inequality because global inequality has fallen is even more bizarre.

What lies behind this huge increase in inequality at the top? The problem with the argument that it just represents higher productivity of CEOs and the like is that this increase in inequality is much more noticeable in the UK and US than in other countries, yet there is no evidence that CEOs in UK and US based firms have been substantially outperforming their overseas rivals. I discussed in this post a paper by Piketty, Saez and Stantcheva which set out a bargaining model, where the CEO can put more or less effort into exploiting their monopoly power within a company. According to this model, CEOs in the UK and US have since 1980 been putting more bargaining effort than their overseas counterparts. Why? According to Piketty et al, one answer may be that top tax rates fell in the 1980s in both countries, making the returns to effort much greater.

If you believe this particular story, then one solution is to put top tax rates back up again. Even if you do not buy this story, the suspicion must be that this increase in inequality represents some form of market failure. Even David Cameron agrees. The solution the UK government has tried is to give more power to the shareholders of the firm. The High Pay Centre notes that: “Thus far, shareholders have not used their new powers to vote down executive pay proposals at a single FTSE 100 company.”, although as the FT report shareholder ‘revolts’ are becoming more common. My colleague Brian Bell and John Van Reenen do note in a recent study “that firms with a large institutional investor base provide a symmetric pay-performance schedule while those with weak institutional ownership protect pay on the downside.” However they also note that “a specific group of workers that account for the majority of the gains at the top over the last decade [are] financial sector workers .. [and] .. the financial crisis and Great Recession have left bankers largely unaffected.”

So increasing shareholder power may only have a small effect on the problem. So why not consider a maximum wage? One possibility is to cap top pay as some multiple of the lowest paid, as a recent Swiss referendum proposed. That referendum was quite draconian, suggesting a multiple of 12, yet it received a large measure of popular support (35% in favour, 65% against). The Swiss did vote to ban ‘golden hellos and goodbyes’. One neat idea is to link the maximum wage to the minimum wage, which would give CEOs an incentive to argue for higher minimum wages! Note that these proposals would have no disincentive effect on the self-employed entrepreneur.

If economists have examined these various possibilities, I have missed it. One possible reason why many economists seem to baulk at this idea is that it reminds them too much of the ‘bad old days’ of incomes policies and attempts by governments to fix ‘fair wages’. But this is an overreaction, as a maximum wage would just be the counterpart to the minimum wage. I would be interested in any other thoughts about why the idea of a maximum wage seems not to be part of economists’ Overton window.
Posted by Mainly Macro at 11:55