Inequality and the common pool problem

One observation from looking at the comments on my post on maximum wages was how many people just considered the impact of this idea on those with high wages, rather than seeing this as involving a redistribution of income.

The classic common pool problem in economics is about how the impact of just one fisherman extracting more fish on the amount of fish in the lake is small, but if there are lots of fishermen doing the same we have a problem. Those thinking about fiscal policy use it to describe the temptation a politician has to give tax breaks to specific groups. Those groups are very grateful, but these tax breaks are paid for (either immediately or eventually) by everyone else paying more tax. However the impact of any specific tax break on the tax of other people is generally so small that it is ignored by these people. As a result, a politician can win votes by giving lots of individual tax breaks, as long as each one is considered in isolation.

Discussion of the minimum wage often focuses on whether the measure is good for the low paid worker (e.g. will they lose their job as a result?). If distributional issues are considered, it generally involves the employer and employee (see for example the case of the Agricultural Wages Board discussed here). Sometimes discussion might stretch to firms doing something that could impact on other workers, like raising prices. However, if changes in the minimum wage have no impact on the overall level of GDP, higher real wages for low paid workers must imply lower real incomes for someone else.

The same logic can be applied to high executive pay, but it is often ignored. Here is part of one comment on my original post that was left at the FT: “the rise in incomes at the very top ... may be a worry in the dining halls of Oxford but in many decades not one person has mentioned such a worry to me. What worries people here, especially those at the bottom of the income distribution, is the decline in real wages …” But if higher executive pay has not led to higher aggregate GDP that pay has to come from somewhere.

Perhaps there is a tendency to think about this in a common pool type way. The impact of high wages for any particular CEO on my own wage is negligible. But that is not true for the pay of the top 1% as a whole. Pessoa and Van Reenen look at the gap between median real wages and productivity growth over the last 40 years in the US and UK. They have a simple chart (page 5) for the UK which is reproduced below. (The legend goes in the opposite direction to the blocks.) I’ll explain this first and then how the US differs. 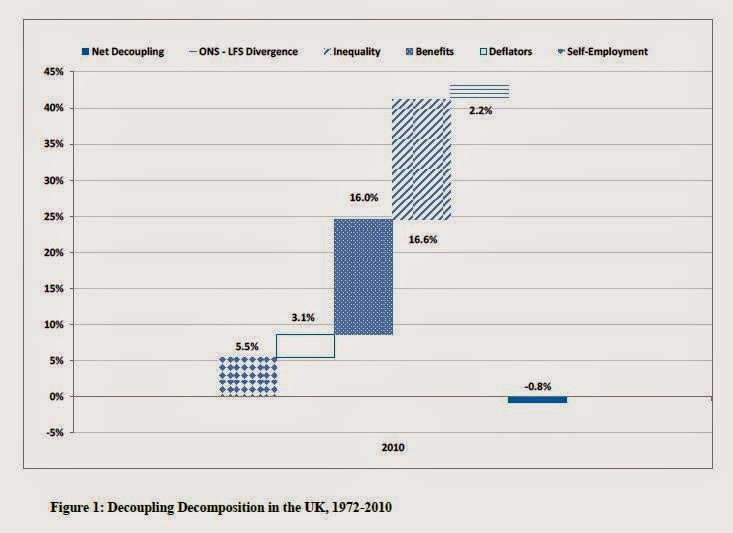 In the UK over this period median real wages grew by 42% less than productivity. None of that was due to a fall in labour’s share compared to profits - called net decoupling in Figure 1. Most of it was due to higher non-wage benefits - mainly pension contributions in the UK - and rising inequality. There are two obvious differences in explaining the larger (63%) gap between median real wages and productivity in the US: the non-wage benefits were mainly health insurance, and in the US there is some decline in the labour share. However in both counties rising inequality explains a large part of the failure of median real wages to track productivity gains.

Unfortunately the paper does not tell us how much of this increase in inequality is down to the increasing share of the 1%, but a good proportion is likely to be. For example, Bell and Van Reenen find that, in the 2000s in the UK, increases in inequality were primarily driven by pay increases (including bonus payments) for the top few percent. “By the end of the decade to 2008, the top tenth of earners received £20bn more purely due to the increase in their share ... and £12bn of this went to workers in the financial sector (almost all of which was bonus payments).” If that £20bn had been equally redistributed to every UK household, they would have each received a cheque for around £750.

More generally, we can do some simple maths. In the US the share of the 1% has increased from about 8% at the end of the 70s to nearly 20% today. If that has had no impact on aggregate GDP but is just a pure redistribution, this means that the average incomes of the 99% are 15% lower as a result. The equivalent 1% numbers for the UK are 6% and 13% (although as the graph shows, that 13% looks like a temporary downward blip from something above 15%), implying a 7.5% decline in the average income of the remaining 99%.


So there is a clear connection between the rise in incomes at the very top and lower real wages for everyone else. Arguments that try and suggest that any particular CEO’s pay increase does no one any harm may be appealing to a common pool type of logic, and are just as fallacious as arguments that some tax break does not leave anyone else worse off. It is an indication of the scale of the rise in incomes of the 1% over the last few decades that this has had a significant effect on the incomes of the remaining 99%.
Posted by Mainly Macro at 10:04