The pre-recession UK debt fuelled boom that never was?

You know, when we all went on a borrowing binge and there was a housing bubble and now we are all paying for this excess. I hear this often in comments, as well as the media. It is a story that seemed implausible at the time, but is it more plausible now? This post is about an alternative story that is in many ways rather more interesting.

I have already discussed at length the myth that the government was profligate, so here I will focus on consumers. If we look at the personal savings ratio, it looks like an open and shut case. (The source for all the data below is the OECD’s Economic Outlook Statistical Appendix.)

So we were saving less, which means we must have been borrowing more, and going into greater debt.

So far, it all seems to fit the story of a borrowing boom that ended in tears after 2007. But if that was the case, more borrowing would be accompanied by falling wealth. In fact, quite the reverse is true.

Financial net wealth as a proportion of income fell in 2002, but then gradually rose again. Non-financial net wealth relative to income steadily increased. So, over this period, the average UK consumer was getting significantly wealthier, despite borrowing more. The reason is straightforward - house prices were rising.

I’ve set UK house prices against those in the US to make a crucial point. In the UK the ratio of house prices to income appears to be on a rising trend, whereas in the US they are not. In these two posts I speculate that the reason for this trend is a combination of falling long term real interest rates and lack of growth in supply.

We have arrived at a critical point. Given the recent recovery in the UK housing market, what happened in the 2000s looks much less like a bubble, and more like a rising trend. It is a trend that makes perfect sense using standard theory. So it is worth exploring what might be the consequences of a trend rise in house prices for consumers.

The most obvious point is that the ratio of mortgage debt to income is bound to rise. What will also rise is net wealth, because the mortgage is a proportion of an asset that is rising in value. That is exactly what we see in the data. What about the increase in non-mortgage debt, and the decline in the savings ratio? This is where it gets interesting.

Two key motives for saving are for retirement, and as a precautionary buffer against adverse shocks. Rising house prices reduce the need for both. To a partial extent we can run down the value of our housing wealth to help fund retirement. Housing wealth can also substitute for precautionary saving, because we can use the asset as collateral to borrow following negative shocks. On both counts, there is less need to save.

This argument that there was no pre-recession debt fuelled consumer boom in the UK was put forward with much greater detail by Ben Broadbent of the Bank of England in 2012. One additional point he makes is that, if there had been an unsustainable consumer and housing boom, we would have expected to see its consequences in defaults during the recession. Instead he notes (p4):

“losses on most domestic loans have actually been unexceptional. Instead, it is UK banks’ substantial overseas assets that caused much of the damage. To take one striking example, the major UK-owned banks have lost around 15 times on non-UK mortgages what they have in the domestic market. Overall, around three-quarters of aggregate losses have been on their non-UK balance sheets.”

The situation in the UK was very different from the US. He says (p12)

In the US there is a big debate over the extent to which the Great Recession was a consequence of the financial crisis, or a housing crisis. (See Mark Thoma here.) In the UK, it looks much more like a financial crisis.

So was there a boom at all in 2007? The OBR measure, which is based on concurrent survey data, suggests a positive gap of around 1% from 2003/4 to 2006/7, rising to 2.2% in 2007/8. However, given that they had to recently modify this measure, we should put a large standard error band around these numbers. The numbers calculated by the OECD and IMF are much higher (OECD 4.9% 2007), but as I explained here, these estimates effectively backcast the apparent fall in supply seen since the recession. David Cobham sent me a nice chart which illustrates this. 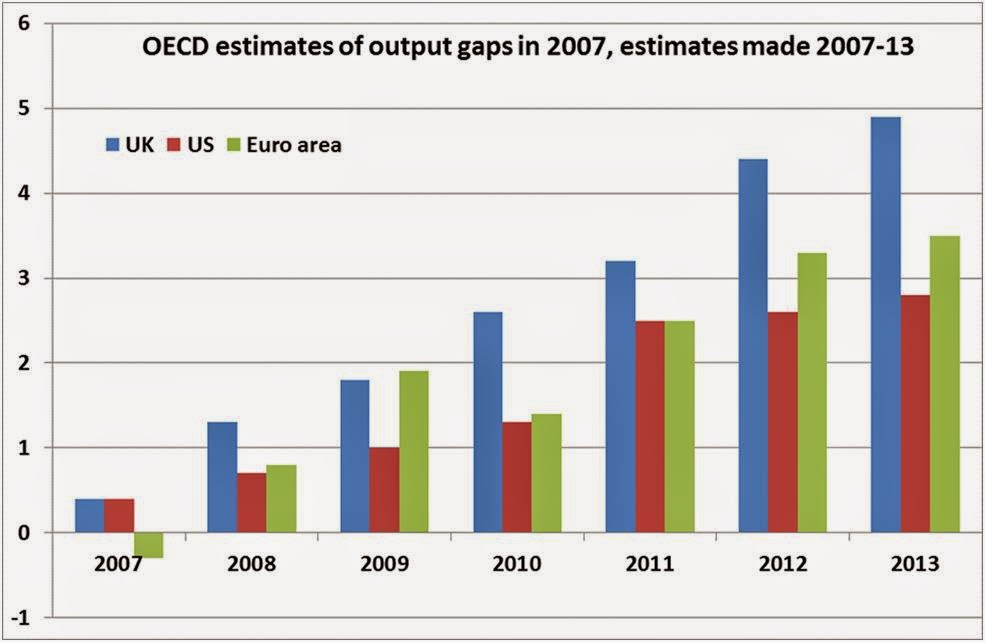 At the time, the OECD did not see any boom in 2007. Only in retrospect, particularly as the UK’s productivity puzzle emerged, did they conclude that there must have been a boom, because productivity normally changes slowly. But as we have no explanation for this productivity puzzle, this is really just guesswork. And it raises another puzzle of its own, which is why a boom of this magnitude had no impact on inflation.

To conclude, the evidence that there was a significant UK boom before the Great Recession is pretty weak, as is the idea that it was due to profligate consumers or government. So why do many people say there was a borrowing led boom? Partly this may just reflect a tendency to assume what happened in other countries must have also happened in the UK. Partly it may reflect a sort of economic moralism: our problems today must reflect our personal sins of the past. But we should also note that this story about UK debt does distract from what was a clear cause of the UK recession: a financial crisis caused by unwise lending overseas by UK banks.