This post completes a discussion of a new paper by Pascal Michaillat and Emmanuel Saez. My earlier post outlined their initial model that just had a goods market with yeoman farmers, but with search costs in finding goods to consume. Here I want to look at their main model where there are firms, and a labour market as well as a goods market.

The labour market has an identical search structure to the goods market. We can move straight to the equivalent diagram to the one I reproduced in my previous post. 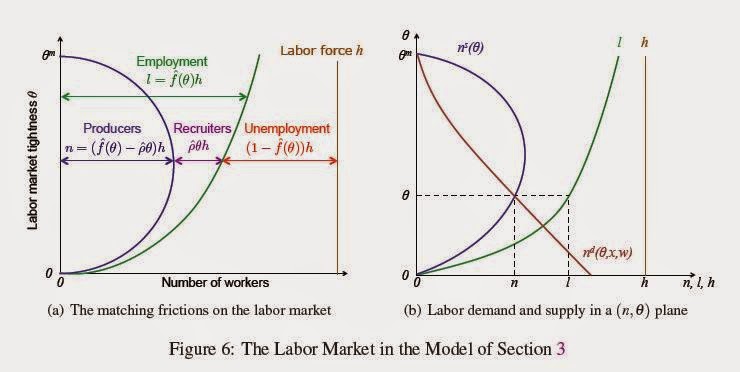 The firm needs ‘recruiters’ to hire productive workers (n). As labour market tightness (theta) increases, any vacancy is less likely to result in a hire. In the yeoman farmer model capacity k was exogenous. Here it is endogenous, and linked to n using a simple production function. Labour demand is given by profit maximisation. Employing one extra producer has a cost that depends on the real wage w, but also the cost of recruiting and hence labour market tightness theta. They generate revenue equal to the sales they enable, but only because by raising capacity they make a visit more likely to result in a sale. The difference between a firm’s output (y) and their capacity (k, now given by the production function and n) the paper calls ‘idle time’ for workers. As y<k, workers are always idle some of the time. So, crucially, profit maximisation determines capacity, not output. Output is influenced by capacity, but it is also influenced by aggregate demand.

Now consider an increase in the aggregate demand for goods, caused by - for example - a reduction in the price level. That results in more visits to producers, which will lead to more sales (trades=output). This leads firms to want to increase their capacity, which means increasing employment. (More employment reduces x, but the net effect of an increase in aggregate demand is higher x, so workers’ idle time falls.) This increases labour market tightness and reduces unemployment.

Here I think the discussion in the paper (bottom of page 28) might be a little confusing. It notes that in fixed price models like Barro and Grossman, in a regime that is goods demand constrained, an increase in demand will raise employment by exactly the amount required to meet demand (providing we stay within that regime). It then says that in their model the mechanism is different, because aggregate demand determines idle time, which in turn affects labour demand and hence unemployment. I would prefer to put it differently. In this model a firm responds to an increase in aggregate demand in two ways: by increasing employment (as in fix price models) but also by reducing worker idle time. The advantage of adding the second mechanism is that, as aggregate demand varies, it generates pro-cyclical movements in productivity. (There are of course other means of doing this, like employment adjustment costs.)

There are additional interesting comparisons with this earlier fixed price literature. In this model unemployment can be of three ‘types’: classical (w too high), Keynesian (aggregate demand too low), but also frictional. This model can also generate four ‘regimes’, each corresponding to some combination of real wage and price. However, unlike the fixed price models, these regimes are all determined by the same set of equations (there are no discontinuities), and are relative to the efficient level of goods and labour market tightness.

For me, this is one of the neat aspects of the model. We do not need to ask whether demand is greater or less than ‘supply’, but equally we do not presume that output is always independent of ‘supply’. Instead output is always less than capacity, just as unemployment (workers actually looking for work) is always positive. One way to think about this is that actual output is always a combination of ‘supply’ (capacity) and demand (visits), a combination determined by the matching function. This is what matching allows you to do. What this also means is that increases in supply in either the goods market (technical progress) or labour market will increase both output and employment, even if prices remain fixed. In Keynesian models additional supply will only increase output if something boosts aggregate demand, but that is not the case here. However, if the equilibrium was efficient before this supply shock, output will be inefficiently low after it unless something happens to increase aggregate demand (e.g. prices fall).

The aggregate demand framework in the model, borrowed from fixed price models, is rather old fashioned, but there is no barrier to replacing it with a more modern dynamic analysis of a New Keynesian type. Indeed, this is exactly what the authors have done in a companion paper.