More on George Osborne’s plans, courtesy of the OBR’s latest publication. (Campaigning for a UK Fiscal Council was one of my better calls - just imagine if you had to rely on today’s government for this kind of information.)

Consider three points in time: 2001/2 (when the UK budget was last in balance, and still largely reflecting the actions of the previous Conservative government), 2007/8 (pre-recession, under Labour), and 2018/9, when George Osborne also intends us to be back in balance. The first chart actually comes from the OBR’s historical database, which only covers the broad aggregates. (It would be fantastic if this database could include more disaggregated information.) 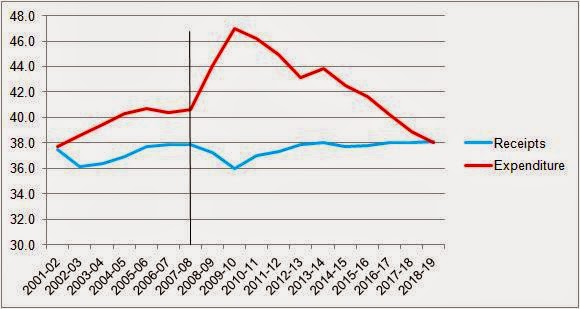 This shows total government receipts (taxes) and expenditure (spending) as a percent of GDP. The two lines meet at the start and end. In 2007/8 we had a budget deficit of 2.6% of GDP. At the time that seemed a bit on the high side: something between 1.5% and 2% would have kept the debt to GDP ratio constant. (Budget balance implies a falling debt to GDP ratio.) For this post the point to note was that the Labour government chose to use this fiscal loosening to increase spending rather than cut taxes.

The Conservative government plans to do the reverse. So does that mean that it is just trying to undo the increase that occurred under Labour? The answer is no, and this is where the OBR’s latest report comes into its own. 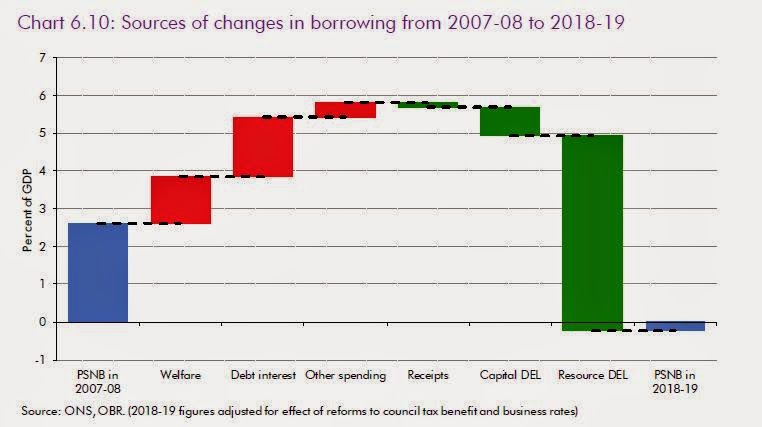 Their chart shows how we get from the deficit of 2007/8 to the small surplus of 2018/9. (There is, as I note here, no good macroeconomic reason to aim for a surplus.) The cuts in spending are not just the size of the 2007/8 deficit - they are much larger for two main reasons: higher debt interest and higher ‘welfare’ spending. The reason for the higher debt interest is straightforward: debt is much higher because of the recession (and to a small extent the fiscal stimulus in 2009). Although academics often assume that higher debt interest is paid for by raising taxes, a more ‘neutral’ approach would be to raise taxes and cut government spending. Osborne plans to just cut spending.

The increase in welfare payments is probably not what you might think it is. The report’s Table 5.7 shows it is not higher unemployment benefits or income support: by 2018/9 unemployment benefit is the same as in 2007/8, and income support is 0.5% lower as a share of GDP (which is the main reason why poverty will increase over the next five years). Housing benefit is 0.3% higher as a share of GDP (partly reflecting depressed real earnings), but the main reason is the state pension, which is almost 1% higher as a share of GDP. This represents both an increased ‘caseload’ (more pensioners) and a more generous value of pensions themselves. Although the numbers suggest that here too Osborne plans to pay for this additional spending by cutting the size of government, he has indicated that he hopes to reduce this increase in welfare payments by some, as yet undeclared, means.

So this is why the reduction in the size of the state planned for 2018/9 is much more than reversing Labour’s increase: in fact, if welfare cannot be cut further, to decrease its size to “probably to the lowest share of GDP since 1938” (p128). In this particular respect, therefore, this government plans to go well beyond anything Margaret Thatcher ever attempted. I suspect when some people write that this Conservative party is more right wing than any since the war, many reading think this is hyperbole. On this metric at least, it is simply fact.
Posted by Mainly Macro at 10:42