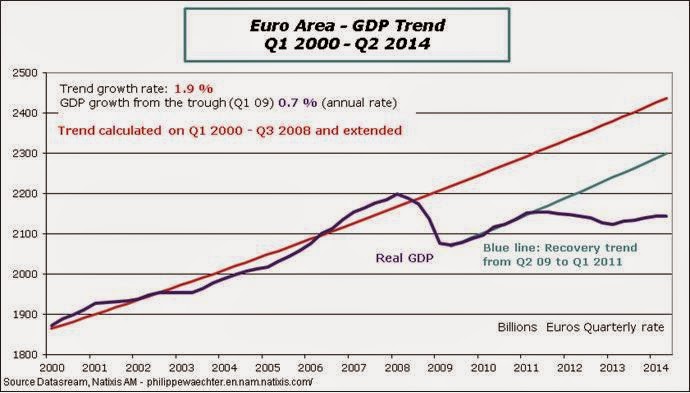 When this happens (taken from a post by Jérémie Cohen-Setton), something has gone very wrong. The Euro was meant to increase growth, not create stagnation. So what, or who, is to blame?

Many outside the Eurozone, and a growing minority within it, will say the Euro itself. But that is not a very helpful response. Given the level of commitment to the Euro, it is the only correct response if there is no version of this currency union that can be made to work better.

Others will say that the only way forward is further political integration through a fiscal union. That seems like the political equivalent of going from the frying pan into the fire. The story of the Euro is as much a political failure as an economic failure. But I also suspect support among many economists for fiscal union is built upon a questionable premise. The premise is that the current difficulties arise because it is inevitable that Germany will put its national interest above the interests of the Eurozone as a whole.

This argument goes as follows. As a result of undercutting other union members, Germany has become too competitive within the Eurozone. This will be reversed. The ECB has an inflation target of almost 2%. Therefore in normal circumstances we would see inflation above 2% in Germany for some period. This is unfortunate for Germany, but those are the macroeconomic rules of the game in a monetary union.

However we are not in normal circumstances, because the interest rate set by the ECB cannot fall any further. As a result, Eurozone inflation is well below 2%. There is an obvious solution to this problem: replace monetary stimulus with fiscal stimulus. However, this is not in Germany’s interests: as a result of becoming too competitive, their economy is relatively healthy, and they do not want above 2% inflation. Therefore we need a fiscal union to impose fiscal stimulus on Germany. (There is a variant of this argument where we focus on the failure of monetary policy and German pressure on the ECB.)

It is natural for economists to reason this way, because we are used to thinking about rational self-interested individuals. But suppose the problem with German public opinion is not that it is being narrowly self-interested, but that it has been encouraged to think about this in the wrong way. There are two aspects to this. First, although Keynesian economics is taught in all universities, in appears taboo in much German public discussion. Under this anti-Keynesian view the chart above has nothing to do with fiscal contraction, so it must be all about the lack of ‘structural reform’ outside Germany. Second, German politicians are in denial about the implications of low German inflation before the crisis. Logically the only way Germany can avoid above 2% inflation is if the Eurozone as a whole goes through a prolonged depression, but as is painfully obvious from the comments on some of my recent posts, the German public is not told about this.

The two deceptions help reinforce each other. Germany says it is doing OK without the need for fiscal stimulus, so why do other countries need it? Of course Germany is doing fine because its period of relatively low inflation allowed it to uncut its Eurozone competitors.

Never underestimate the power of bad ideas, particularly if they have ideological roots. Here we have the two mistakes that led to the Great Depression being repeated. We look back at the 1930s and think if only they had known about Keynesian economics a depression could have been avoided. However the depression was as much about countries attempting to stick with the gold standard, and the problems with that were obvious at the time. Today we do know about Keynesian economics, but both mistakes continue.

It is possible to believe that balanced-budget fundamentalism is somehow hard wired into the German psyche, and I have personally experienced moments like that described in this comment to my earlier post that seem to confirm this. So I do not want to discount such explanations entirely, but I do wonder if a powerful motive behind this is just the same anti-state neoliberalism that you see elsewhere. Those on the right appear to have a greater distrust of economists and their theories. This may be true of popular attitudes (HT Tyler Cowen), but it is also the case of those running the country.

According to Der Spiegel, the three permanent secretaries running the German finance ministry have studied law rather than economics. Among the nine department heads seven are lawyers and just two are economists. While the balance between lawyers and economists has always favoured lawyers, it has apparently become worse under Schäuble (whose doctorate is also in law).

As a result of all this, it is not at all clear to me that the current problems of the Eurozone are all down to German self-interest. The case for additional infrastructure spending in Germany looks strong, as argued by Marcel Fratzscher, head of the German Institute for Economic Research (DIW). It would therefore seem more than possible to get Germany to take part in a Eurozone wide programme of additional public investment, which can be justified on a microeconomic/supply side basis as well as on macroeconomic/demand side grounds. All that stands in the way is the power of bad ideas, and its embodiment in the Eurozone’s fiscal rules.